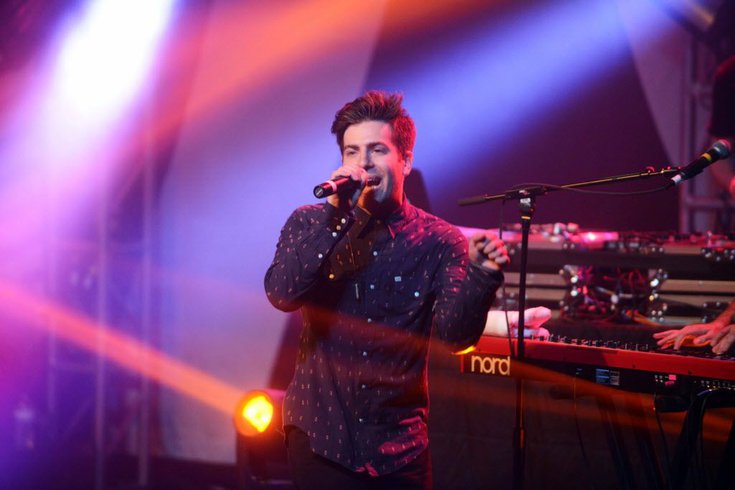 Rapper Hoodie Allen, who will release his fifth studio album later in 2022, started his musical career while a student at the University of Pennsylvania. He's back in Philly to perform at the Foundry on Wednesday, Aug. 3.

It's been a decade since Hoodie Allen released his breakthrough single "No Interruption."

The track went platinum last month as the musician prepared to embark on his first tour in nearly three years. It includes a stop in Philadelphia, where Allen's musical career took off while a student at the University of Pennsylvania.

The rapper will perform Wednesday at the Foundry in Fishtown.

"It always feels like a second home," Allen, 33, said of the city. "When I was in college in Philly, that kind of set the tone for it being real. The first time I ever had one of my songs get a million plays, I was in my off-campus apartment at UPenn."

Allen, whose real name is Steven Markowitz, has been teasing his fifth studio album, which will be released at some point this year. Allen said it's done, but its title hasn't been made public. Like the rest of his music, it will be released without the help of a label.

Earlier this year, the rapper released two singles. "Wouldn't That Be Nice" and "Call Me Never" feature Allen singing pop-punk breakup tracks over guitars in the style of Machine Gun Kelly or Blackbear.

"Wouldn't That Be Nice" has a vibe similar to the music on his last album, "Whatever USA," released in 2019, and his 2016 album "Happy Camper," in which he integrated more rock, pop, funk and acoustic influences into the rap sound that made him popular.

On "Call Me Never," the rapper goes completely rock, with distorted guitars and angsty vocals that wouldn't sound out of place on a track by the bands All Time Low or Mayday Parade. Although he doesn't play the guitar himself, Allen made it into a solid pop-punk song by collaborating with Nick Anderson of the the Wrecks.

Allen said the rest of his upcoming album was done in the same emo-adjacent, early-2000s style, which has seen a resurgence over the last couple years.

The new tracks haven't reached the popularity of his past releases, but they both have hundreds of thousands of plays on Spotify and YouTube.

He has many ties to the pop-punk scene. Allen opened for Fall Out Boy on their "Boys of Zummer" tour in 2015 and was featured on the track "All My Friends" by State Champs, a band from upstate New York, in 2018.

Although pop punk has found a new crop of listeners recently, it's not a new sound for Allen.

He grew up on Long Island where emo bands like Taking Back Sunday, Envy on the Coast and Bayside were an important part of his music diet.

"I think there's been elements of rock and pop punk and emo in my music for years," he said. "I've always wanted to lean more into it. This is probably the first time I've went full send on the pop-rock, pop-punk space."

He described the upcoming release as a concept album about a failed relationship.

"That was kind of the sound that evolved from those songs," he said. "It wasn't really an intentional switch."

Allen spent his summers in the Poconos at Camp Chen-A-Wanda. The camp offered a range of activities from music and skateboarding to tennis and arts and crafts. Going away to summer camp is a longstanding tradition among many Jewish communities, including the one where Allen grew up.

"That's where you become a man," Allen said. "It's not your bar mitzvah. It's the experiences you have when you're shipped away for eight weeks."

At Penn, Allen joined the Alpha Epsilon Pi fraternity, which has led to some calling his music "frat rap."

Though Allen said he was a strong student, majoring in marketing and finance, grades weren't at the center of his attention. He did well enough to land a job at Google after he graduated. He worked there briefly before his music career took off.

"I wasn't really trying to be the smartest person there," he said of his time at Penn. "It was about being well-rounded and making the most of the experience."

Hoodie Allen was a duo in the early days before it became his solo project. Allen, who had been rapping and posting music online for fun since he was a kid, handled the vocals, while his childhood friend, Sam Obey, made the beats. Later, he worked with R.J. Ferguson, who also went to college at Penn.

Though Allen has maintained an upbeat, positive public image since his days at Penn, his career hasn't been without blemishes.

In 2020, sexual misconduct allegations against Allen and at least one person on his team surfaced on Twitter. Allen denied the allegations in a string of tweets, calling them "wildly disgusting."  He also cut ties with a person who was at the center of the other allegations.

Additionally, Allen said he regrets his early song "UPenn Girls," which became a hit on Penn's campus in 2009. The song is a sloshy, college anthem about exploits with sorority girls interspersed among a sting of insider Penn references.

Allen said he's matured since his days at Penn and notes the song was never officially released on streaming services.

"It's a terrible song," he said. "I think it culturally only exists within the walls of UPenn and nowhere else."

But Allen remembers most of his time at Penn fondly. He played on the university's sprint football team, which is limited to players who weigh 178 pounds or less.

Allen also said he misses getting food from Bui's Lunch Truck, which has been serving sandwiches curbside at the University Campus since 1988, the same year Allen was born.

"When I look back at my experience, I just think (Penn) was a place where you were constantly challenged intellectually, but also just socially by other people," he said. "That, I think, is what the college experience is really about."