For 16 years, Jesuit priest has given Camden youth a reason to hope 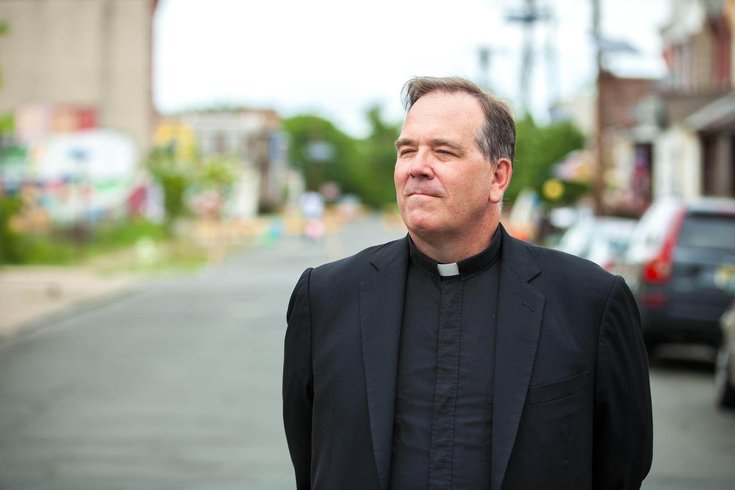 The Rev. Jeff Putthoff, founder of Hopeworks N' Camden, reflects outside of the organization's home at State and North 6th streets in North Camden.

Jesus made Jeff Putthoff come and stay in Camden — or at least the guy playing Jesus did.

It was during a Stations of the Cross walk at 5th and York streets in notorious North Camden — the section of the city upstream from the Ben Franklin Bridge.

The man playing Jesus and his followers stood their ground on one of Camden’s roughest corners while heckled by drug dealers.

“Father Jeff's program brought inspiration to North Camden when it was hard to find any. His approach of teaching entrepreneurship to teens and young adults embodied the spirit of teach the man to fish.” – Helene Pierson

A divinity student visiting the city in 1994 for a service project during a break from theology school in Boston, the Kansas City native “had a moment on that burnt out corner.”

Putthoff was impressed by the scene and by the Jesuits who’d organized the food pantry where he volunteered.

“They were engaged, they were on edge, they dived in. I loved their energy,” recalls Putthoff, who attended a Jesuit high school and felt he had discovered adults who would listen, not just preach.

A few years later, now ordained as a member of the Jesuits, the Rev. Jeff Putthoff came back to Camden.

He worked as an associate pastor, met with an ecumenical group from other denominations and explored what Camden needed.

He and the group decided to work with youth and education — always a touchstone value for members of the Society of Jesus, the formal name of the Jesuits, who are often referred to as God’s Marines for their zealous outreach.

He soon settled in — less than a block from the corner where he’d seen dealers heckling a man playing Jesus.

The organization began in August 1999 and opened its doors to the city’s youth the next year.

He’s been at it for 16 years with a unique program aimed at getting through to failed students. Historically, the city's graduation rate has been among the worst in the state, generally around 50 percent in the city’s two main high schools, Camden High and Woodrow Wilson High School. 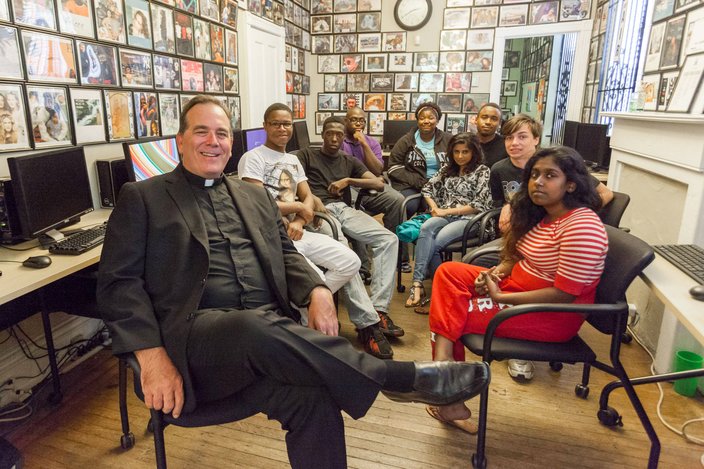 The Rev. Jeff Putthoff sits for a photo with some of his students. Close to 3,000 Camden youths will have earned the equivalent of a high school diploma from Hopeworks' in-house tutoring program, and 200 of them went on to college. (Thom Carroll / PhillyVoice)

“We’re about claiming hope," Putthoff said, explaining the program's name, Hopeworks ’N Camden. “Hope is sweaty. The people of Camden taught me that,” said the priest, known for his collection of worn hoodie sweatshirts, his typical attire when not wearing clerical attire.

Helene Pierson, who ran a housing program in Camden until recently, says his approach was unique.

“Father Jeff's program brought inspiration to North Camden when it was hard to find any. His approach of teaching entrepreneurship to teens and young adults embodied the spirit of teach the man to fish,” she says.

Pierson worked with Putthoff in a campaign that called out city leaders in 2012 for the city’s astounding murder rate — 67 officially, but another two victims of a fire never declared an arson would make the tally 69.

Putthoff and supporters planted brightly painted crosses for each of the dead in Roosevelt Park, the grassy expanse in front of Camden’s City Hall.

While the murder rate has been halved — though it still remains high — since the old city police department was disbanded and replaced by county-based force, dealing with trauma and its after-effects have remained part of Hopeworks’ mission.

Putthoff says he’s glad the homicide rate is down and happy to see more cops while on his bike rides around the city, but he adds that the root causes of trauma in Camden have yet to be grappled with by local leaders.

Described recently in the National Catholic Reporter as “the voluble and passionate advocate for disadvantaged youth” in the poorest city in the country, Putthoff made up his tech-heavy program as he went along.

His seat-of-the-pants approach began with “one room and five computers,” thanks to a grant from Campbell’s, the Camden-based food company.

“I’m totally self-taught with technology, but that goes with the Jesuit philosophy of ‘learn to learn.’”

“We ordered the computers and learned how to do things by reading the book. I didn’t know how to do stuff,” he says as he scrolls through his cell, firing off his ubiquitous social media posts as we chat. 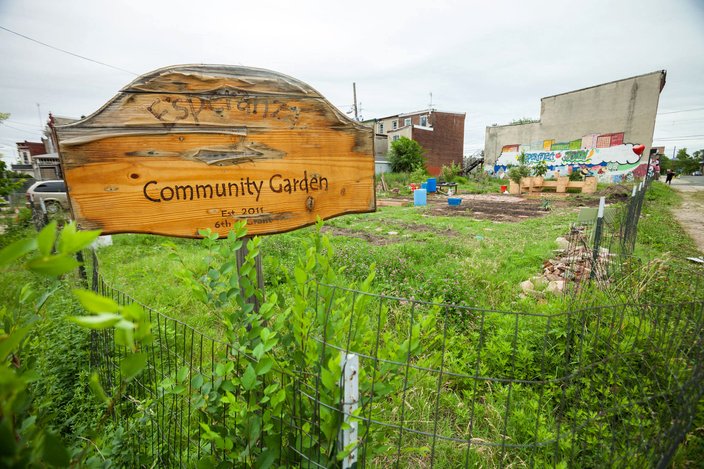 No one came at first, despite his self-confessed need to “always be selling.”

But he had no need to worry: Close to 3,000 Camden youths will have earned their equivalent of a high school diploma from Hopeworks’ in-house tutoring program. The program helped 20 students to enter college this year; overall, 200 Hopeworks youths have gone on to college.

That’s amazing, especially given that the average student who walks into Hopeworks reads below the 7th-grade level when he or she enters.

And while Putthoff is proud of that achievement, he’s prouder that Hopeworks has created tech-based businesses, doing mapping, targeting sales, building websites.

As well as inspiring students to go on and start their own businesses using these skills, Hopeworks' in-house businesses generate 30 to 35 percent of the organization’s annual operating budget.

One graduate, Sade’ Coley, took her skills to California, where she now works for Google.

“I loved tech, but I was not very tech [savvy] when I started. Knowing how to build a web page was a huge step toward getting here,” she says.

By not living hand-to-mouth like so many Camden charitable organizations, Hopeworks has managed to sock away an enviable $3.5 million, insulating it to some extent from the whims of grant givers.

“We’re viable and sustainable,” he says, part of why he’s heeding the new call to step away from the organization he’s built and nourished.

He’s turned day-to-day operations over to the new executive director, Dan Rhoton, a former schoolteacher. Rhoton has served as chief impact officer for the past three years at Hopeworks.

Putthoff remains in an advisory role until the end of August when he completes a master’s degree – his fourth, actually – in organizational dynamics at the University of Pennsylvania.

Then he hopes to hear where Jesus thinks he should be next.