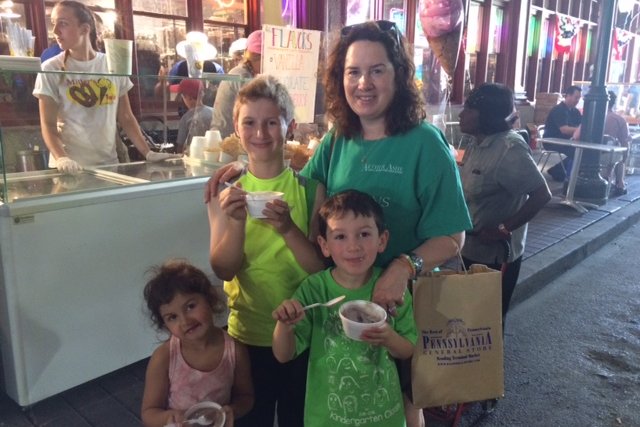 Nicole Cossrow and her family from Jenkintown -- Georgia and Alex in front, Ben in back with his mom -- came to Philly's Reading Terminal Market Saturday. to celebrate National Ice Cream Month with the market's "Sidewalk Sizzle and Ice Cream Freeze" event. "Coming to the market is our favorite thing to do as a family," she explained.despite temperatures in the low 90s.

Nicole Cossrow and her three children were unfazed by Saturday’s heat and humidity as they strolled around outside the Reading Terminal Market.

And why not, despite temps in the low 90s?

Seems the heat of summer – it will be above 90 degrees through Tuesday and then again from Thursday into next weekend -- makes the ice cream go down easier.

That’s especially so during the market’s “Sidewalk Sizzle and Ice Cream Freeze,” a celebration of grilled foods and all things ice cream.

“Amazing,” said Ben Cossrow, 11, as he dug into his mound of ice cream whipped up on the spot by Miller’s Twist outside the market in a covered portion of Filbert Street, away from the sun.

Not to be out done, sister Georgia, shifted adjectives and simply said, “Fantastic.”

It’s the second year in a row for the Cossrows at the terminal's grill and chill event.

“Coming to the market is our favorite thing to do as a family,” explained Nicole Cossrow, who always keeps a stock of venerable Bassetts ice cream in her home freezer.

Watching Miller’s Twist churn their ice cream right there on the street won over the family – this time – but she says she’ll always go back to Bassetts.

Michael Strange, the fifth generation of the Bassett family to run the company – his mom was a Bassett – doesn’t mind spreading the wealth. He knows what’s good for one vendor at the market is good for all in the urban market, a Center City mainstay since 1892.

“We’re a huge believer in synergy,” he explained, adding he and other merchants always look for ways to integrate each other’s products into their food.

And while Bassetts predates the market by a few years, first in Salem County, New Jersey and then at 5th and Market Streets in Philadelphia, his family’s ice cream stand has been an anchor since the day the market opened.

Bassets is the only remaining tenant that’s been there since 1892, and the nation’s oldest ice cream company. There is a sixth generation coming up in the business.

Bassetts, while it has 40 flavors, is built on vanilla.

A third of all of its ice cream sales are vanilla, made from a proprietary vanilla bean blend carried to the tastebuds by the silky mouthfeel that a 16.5 percent butterfat content imparts.

The hot weather Saturday was not a big deal for Bassetts.

“We’ve been to this rodeo before,” he said of the heat.

“Ya gotta keep it cold. We have 155 years of experience keeping ice cream cold. Our freezers are up to it. And worst case scenario, we bring out the dry ice. Hot summer? This is our time,” Strange said.

Melt Kraft, a market vendor of “artisan grilled cheese” made from its parent company’s cheeses produced at Valley Shepherd Creamery in Morris County, New Jersey, has come to rely on Bassetts when it dabbles in ice cream in Philadelphia.

While the creamery makes a gelato that is available in some North Jersey and New York locations, that product does not travel well, Rebecca Foxman said as she whipped up a once-a-year specialty just for the chill and grill event.

So they instead use Bassetts when they make a specialty ice cream sandwich just for the event.

Using a special press, Melt Kraft annually serves up an ice cream sandwich made on hot, soft and sweet Hawaiian bread, with a solid still cold scoop of Bassetts in the center.

There is not enough space at their booth in the terminal to do the specialty treat routinely, but Melt Kraft plans to bring the item to another outlet near Rittenhouse Square.

After Saturday, it could be worth heading to 17th Street once the ice cream sandwich is available there.