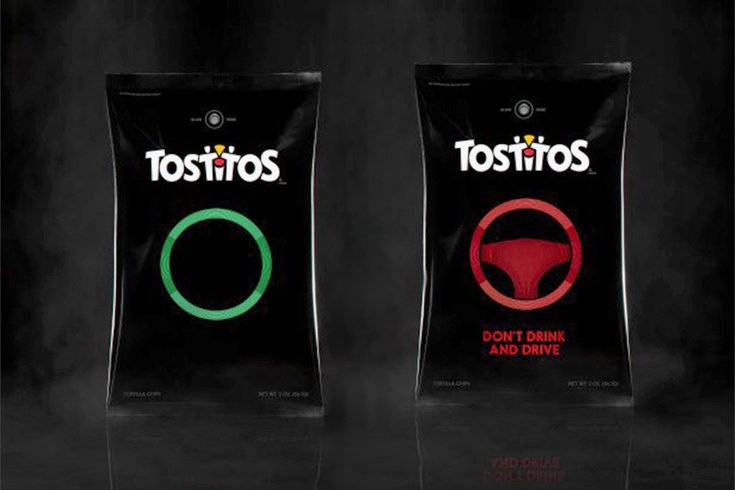 This Tostitos bag contains mini sensors to alert Super Bowl partyers that they may be too drunk to drive. It also offers a $10 coupon code for an Uber ride home.

I don’t think I know anybody with ties to the Lawrence (KS) Police Department but I wish I did, because its social media game is on point.

When word broke last week that bags of Tostitos can serve the dual role of belly-filler and DUI-avoider, the law enforcement agency in the land of the Jayhawks landed in the viral sweet spot with its response.

“If you have to blow into a Tostitos bag to know if you're intoxicated, for the love of all that is holy, DO NOT DRIVE,” reads its Tweet that, as of 2 p.m. Monday had been retweeted more than 80,000 times and liked on nearly 138,000 occasions.

I like to drink. I like to watch the Super Bowl (especially when the Broncos are playing in it, and/or the halftime performer is Ms. Katy Perry). But I also know that drinking and driving is a bad thing to do, with or without the approval of a bag of snacks.

That reason is because it’s true.

And that reason is what apparently inspired Frito-Lay, Uber and Mothers Against Drunk Driving to team up on an effort to “remove 25,000 cars from the roads that Sunday evening,” per Jennifer Saenz, Frito-Lay’s chief marketing officer.

“Whether watching the big game at a friend's house or at a local bar, a safe ride home is just a few, easy taps away,” she continued. “By simply entering a participating Tostitos UPC code in the Uber app, fans nationwide can receive $10 off an Uber ride."

While a Tostitos bag probably won’t hold up under cross-examination in a court of law, this slick, black, specially created “Party Safe” version contains mini sensors that will alert you should it detect enough alcohol to trigger a read “Don’t Drink and Drive” icon on the front.

The bag – which has been tested – also offers a $10 coupon code for an Uber ride home. (Despite the limited run, the UPC code for most standard bags will also offer a discount, as well).

Sure, this whole thing can be brushed off as a marketing gimmick and, considering how the deal isn't exclusive to those fancy new bags, it kind of is. But it’s not that to Tennessee Titans tight end Delanie Walker, whose aunt and uncle were killed by a drunk driver after they watched him play for the San Francisco 49ers in Super Bowl XLVII.

That’s why Walker is the face of the campaign.

“Having a good time and being safe go hand in hand,” said Walker in a press release about the Party Safe campaign. “Drunk driving is 100 percent preventable. Thanks to Tostitos and Uber, it’s easier than ever to make a safe choice if your plans include alcohol.”

The rides will be available during and after Sunday’s game. Party safely, folks.