WATCH: Here's how it feels when The Killers invite you on stage to play a song on drums 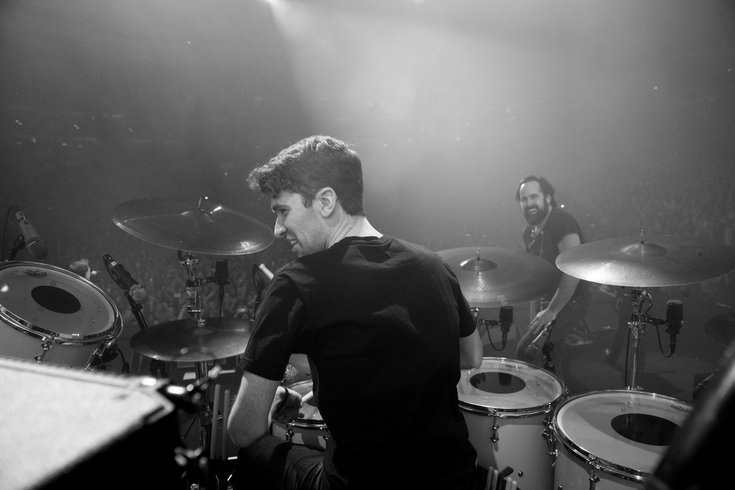 When The Killers performed at the Wells Fargo Center on Saturday night, audience member Tyler Steinbronn brought a sign asked to be invited on stage to perform a song with the band. Obviously, it worked.

Like most of the 21,000 people who headed to the Wells Fargo Center on Saturday night to see The Killers show, I remain totally jealous of Tyler Steinbronn three days later.

Nine songs into a 23-track show that was nothing short of amazing (see here, here, here and here for video evidence backing that claim), lead singer Brandon Flowers looked down onto the floor and saw a sign.

It was the 23-year-old Rowan University student’s plea to head up on stage, sit at Ronnie Vannucci’s drum set and perform “For Reasons Unknown” off the band’s 2006 “Sam’s Town” album.

Flowers saw it and asked the audience, "Should we bring him up?” The cheers answered yes, so, bring him up, they did.

Suffice it to say, it was a dream come true for Steinbronn, who performed admirably in the unexpected situation.

On Tuesday afternoon, he told PhillyVoice all about how it came to be.

Born in Northeast Philly, Steinbronn moved to Vineland, Cumberland County when he was of kindergarten age.

He wasn’t much older when he started messing around with his dad’s drum set, becoming a fan of the Las Vegas band in his middle-school years. He first saw them in Camden in 2013 and Saturday marked his fifth time at a Killers show.

A music-industry major in Rowan’s College of Perfoming Arts, Steinbronn had tried a similar gimmick at U2, Coldplay and Killers shows in the past, to no avail. He’d seen others do it, so figured he might as well give a shot. That changed in a remarkable way last weekend.

I was freaking out. It was almost too good to be true. I’m not that lucky!" --Tyler Steinbronn

He and his family were vacationing at Walt Disney World in Florida last week, a trip they cut short by a day so he could go to the concert (and his parents could go to the Eagles game across the street).

He said he got to the arena around noon “after fighting though all that Eagles craziness to wait in line.” While waiting outside for about seven hours, he let fellow fans in on his plans.

Since they would end up standing around him in the general-admission floor area, a plan was hatched: They’d all use their mobile-phone flashlights to illuminate the sign in the hopes of catching the band’s attention.

“I didn’t think they did that type of thing, but then I saw someone get on stage and play piano with them, so I thought this might be a new thing for them,” he explained, noting that he chose that particular song since “they’d never let someone get up there and play ‘Mr. Brightside’ with them.” 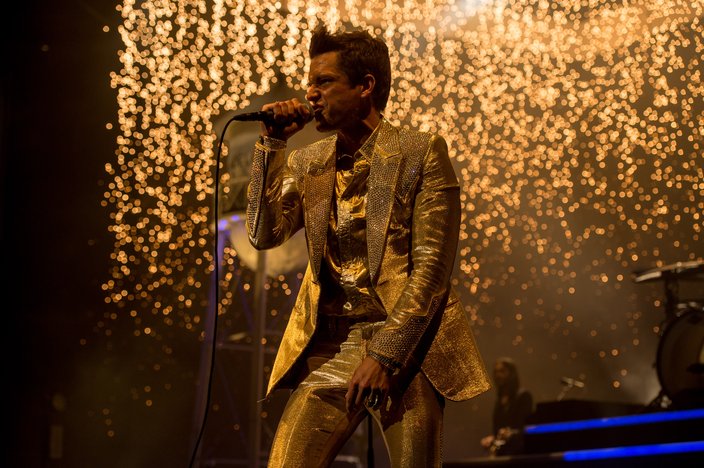 Brandon Flowers, lead singer of The Killers, noticed an audience member's sign at Saturday night's concert and invited him on stage to perform the song 'For Reasons Unknown.'

When Flowers invited him up, the crowd parted and cleared a path for him to get to the stage.


“Brandon looked at me and said, ‘What’s going on? You ready?’” he recalled “Then I went over to Ronnie and he said ‘come check (the drum set) out.’

“I sat down and I knew it was going to be so weird to play someone else’s instrument. It’s like sitting in someone else’s car. You have to make those adjustments, but this one just felt like it was set up for me. I was freaking out. It was almost too good to be true. I’m not that lucky!”

Without an earpiece, it was a little difficult to pick up on when he should start drumming, but hearing the bass and vocals helped.

“I know the song. I know the feel of it,” he said. “Ronnie just kept looking at me and smiling. It was weird. At first, I didn’t notice the audience but when I was up there, I was trying to notice every single thing going on by the middle of the song.”

Steinbronn said it was “like an icebox up there” with all the fans designed to keep the performers cool.

All told, his performance lasted a shade under four minutes. When he was done, Vannucci gave him a little bit of whisky that he had left in his cup and his drum sticks.

“He gave me a big hug and said, ‘that was awesome, man,’” Steinbronn recalled. “I must have high-fived 200 people on the way back to my spot.”

He ran into a friend of his who he didn’t even know was at the show. His phone would soon be blowing up with messages from jealous friends.

By the time he got home, his parents were asleep. They’d hear about what happened before he woke up the next morning. His dad was particularly impressed.

“That was a crazy dream that he and his friends always had, talking about what song they’d play if they could get up on stage with Van Halen,” he said.

Rob Loud, a photographer on tour with The Killers, would send him a few shots he’d taken during the performance. 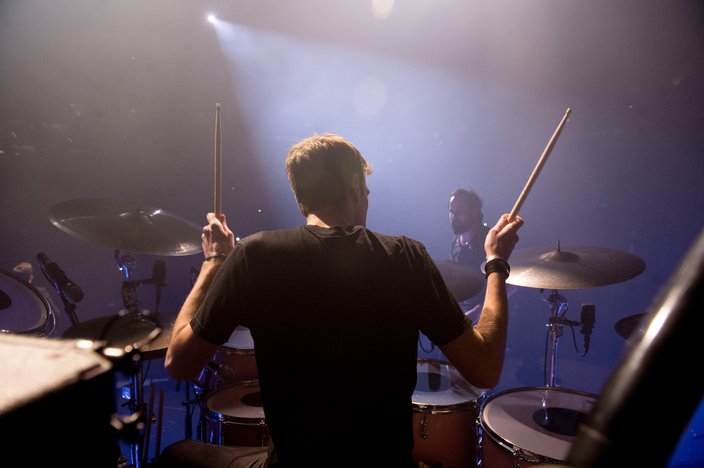 Tyler Steinbronn, a 23-year-old student at Rowan University, performed 'For Reasons Unknown' with The Killers at their Saturday night concert at the Wells Fargo Center. Seen in front of the kit is drummer Ronnie Vannucci.

Asked what advice he’d give folks who want to do the same thing he did, Steinbronn – who graduates at the end of this upcoming semester – kept it simple.


“Just show up and try it. That’s the only way it happens,” he said. “I never got mad when I got turned down before. Finally, it happened.”