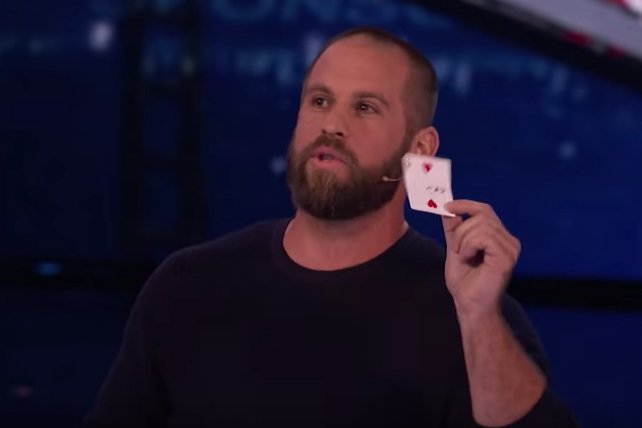 It was a little different this time. The flood of anxiety and emotion that Jon Dorenbos had walled off during his rise on “America’s Got Talent” began showing fissures Tuesday night in front of America. His hands shook. There was a twinge of nervous alacrity in his voice.

Maybe it was because the 12-year-old buried under the muscle of an NFL player was living out his dream as a finalist on the network talent show. Maybe it was because a passion he found as a youth to escape the tragedy of his mother’s murder at the hands of his father had reached a graduation stage.

“I always wanted to be a rock star, and I can’t sing or dance, and I can’t play an instrument but I’m able to share with the world my magic,” Dorenbos said. “I was a little more charged up for this tonight than I think was before, because how about this? This is true. It happened:

“About a week ago, I’m sitting at the table in my house with Annalise [Dale, his girlfriend] and a friend of mine, going over the trick I was going to perform tonight. I was going over the routine in my head, and I kept saying, ‘Guys, I don’t know if this is my routine, I don’t know if this is it.’ I hear a loud bang behind me. Annalise stands up. I looked behind me and no one was there. I have a picture of my mom and me on a top shelf, and the picture literally fell on the floor. Annalise turned around me and told me, ‘Well, there’s your answer. This is the exact routine you’re doing and your mom is telling you that.’

“That’s 100-percent; no joking. I even took a picture of it. I made sure I took a picture, because no one will believe me. I don’t care if anyone believes me. It happened. Basically, I wanted to share a little bit of who I am and what I am about and that’s what happened.”

With that added motivation, the Eagles’ veteran long snapper made the difficult look easy — as usual. His segment began with him performing card tricks alone in the Eagles’ locker room at Lincoln Financial Field, which was filmed weeks ago one Friday when the Eagles were still in training camp. It ended with a standing ovation and raves from the celebrity judges.

On social media, he was getting plenty of love from his NFL family. Green Bay Packers’ star quarterback Aaron Rodgers tweeted, “Incredible talent on @nbcagt and @JonDorenbos has been an inspiration with his magic and his story. Well done buddy! #respect”

"Win or lose, I gave it my shot. I got a chance to perform my magic to America, and that’s all I wanted. I couldn’t be happier. This show has an amazing crew and amazing producers. They gave me suggestions. They made my act better. I’m proud of how I put my act together and we’ll see where it goes. Win or lose, I will walk out of this with my head held high and feel great about it.”

Dorenbos went with the card trick he initially had doubts about. It involved each of the celebrities writing their names on a No. 2 card. Then as Dorenbos spoke to the live audience and those watching on TV about his journey, he turned over the cards of each of the celebrities, concluding with name “Eric,” which Simon Cowell placed on the two of hearts. Dorenbos wheeled around a chalkboard that revealed the name Eric, the name of Cowell’s son, on it.

“Magic saved my life and there have been plenty of times when I was lost, and I didn’t have the answers and I didn’t know where to go,” Dorenbos said. “What I did was I turned to magic and it simply taught me to don’t hate, don’t blame and to forgive. I’ve learned to forgive, and when that happens, we will find ourselves.”

“Tonight was about how Jon came full circle with this show,” said Susan Hindman, his aunt who was in the audience, his mother’s younger sister who raised Jon and his older sister Kristina, after his mother Kathy was killed on June 2, 1992, by her husband, Alan. Jon’s father. “I think Jon’s emotion came out and this showed a lot of other sides of him, and all of the tragedy that he came from, and one of his goals with going on this show was to be inspirational. For Jon, this is where it all started.”

Dale, Jon’s girlfriend, was standing there in the audience next to Jon’s aunt.

“This has been a great ride and I’m so happy for Jon,” Annalise said. “He put on a great performance tonight, and this was like a graduation. It’s been an emotional ride with everything that he’s been through in his life. That all came out tonight. He’s turned his story into something inspirational for everyone to relate to. It was a powerful performance that hit home with everyone that was watching.

“Tonight was the finale and he knew this was it. When you’re on this show, and with everything he’s been through, from the beginning, and the golden buzzer, and you’re in front of America, this was it for him. This is the performance, Jon thought, that would define the rest of his life beyond football. When he was on that stage and everyone stood up, and Simon Cowell said he hopes Jon is the winner of the show, that hit home. He’s someone who has America on his side. It’s been an incredible journey.”

Dorenbos will find out tonight if he won or not. He has the Philadelphia fan bas behind him. Now, it seems, the country.

“This has been unbelievable,” he said. “Win or lose, I gave it my shot. I got a chance to perform my magic to America, and that’s all I wanted. I couldn’t be happier. This show has an amazing crew and amazing producers. They gave me suggestions. They made my act better. I’m proud of how I put my act together and we’ll see where it goes. Win or lose, I will walk out of this with my head held high and feel great about it.”

Dorenbos said he’ll be back doing his other job on Thursday, hopefully, a $1 million richer as the champion of “America’s Got Talent.”