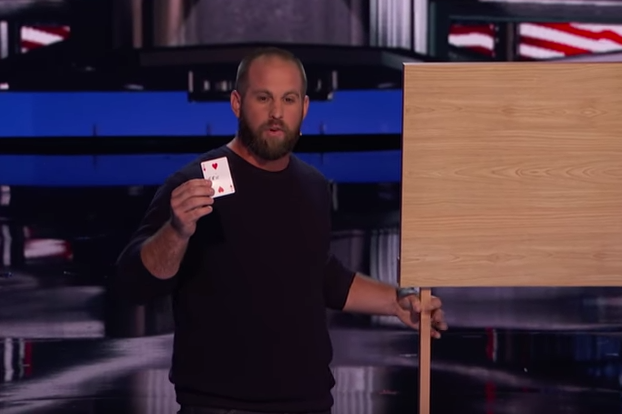 Jon Dorenbos finished off his AGT run with a personal story.

As one of the ten finalists, Jon Dorenbos has made it to the finish line of "America's Got Talent." In the finals on Tuesday night — It really was amazing how well the scheduling worked out, with the Eagles still six days away from their next game — Dorenbos told an inspirational story, talking about how "magic saved his life."

While Dorenbos told that story (and he told it well), he also did a pretty nifty card trick. Afterward, he even got Heidi Klum to say "Go Birds!" Klum, along with the other three judges, were extremely complementary of Dorenbos.

"You talk the talk, you walk the walk, but you're more than just a great performer," Simon Cowell said. "You're someone who I think we would all be proud to say, 'The winner of this show is Jon Dorenbos.'"

Regardless of the final result, Dorenbos acquitted himself quite well on the national stage. Check out the full video of his final trick here:

The voting takes place tonight, and Dorenbos will find out how he fared Wednesday on the live results show (NBC, 8:00 pm to 10:00 pm). After he finished his trick, Dorenbos received support from the Eagles and many other people/places:

Incredible talent on @nbcagt and @JonDorenbos has been an inspiration with his magic and his story. Well done buddy! #respect

My man @JonDorenbos crushed it again!! Go vote for him! pic.twitter.com/TYOXtpIUH0

Vote for our guy @JonDorenbos! Let's bring this home! He's an inspiration to us all #Vote4Jon https://t.co/9RNiYJJgqU

Vote for Jon Dorenbos on America's Got Talent. Once again he was amazing.

What ever you do... Don't miss my former teammate & good friend Jon Dorenbos!!! #BirdGang pic.twitter.com/BqVwnlIdiF

I voted to the max for my good friend Jon Dorenbos on AGT. Have you? He's amazing and a fabulous person!!!! @Eagles https://t.co/aG2BfSYUn0

#Phillies fans, help us support our friends at the @Eagles by voting for @JonDorenbos to win @nbcagt! pic.twitter.com/GhEKI37NZT

Big @JonDorenbos just killed it again on America's Got Talent! Vote for him people, he is amazing

They’ve convinced us! #Flyers fans, be sure to vote for @JonDorenbos until 7am tomorrow for the @nbcagt finale! https://t.co/HkE9kbdaU3

Saved the best performance for last. Congrats bro! Go vote for him!!!!! https://t.co/nyVkUopjI2

Show the @Eagles' Jon Dorenbos some #BrotherlyLove! Voting is open until 7am tomorrow for the @nbcagt finale! pic.twitter.com/oqzsBDR8de