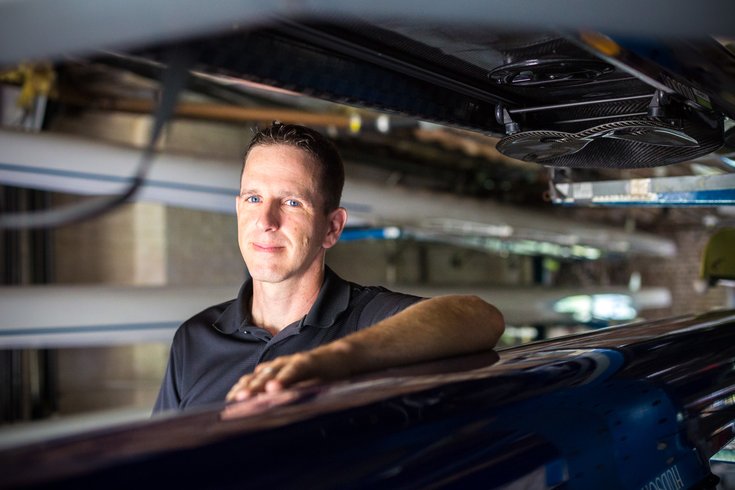 Patrick Rufo, founder and owner of Rufo Optimal Workouts, at the boathouse of the Fairmount Rowing Association. Rufo coaches rowers, in addition to his roster of strength-training clients.

For Montgomery County native Patrick Rufo, training is as much about the mind as the body.

Rufo, 38, is a former professional rower who competed to participate in the 2008 Olympics. After failing to make it in, he wondered how so many athletes — himself included — could train to become so physically strong ("I was 99 percent there," he notes), but still fall short when it comes to do-or-die performance time.

The answer, he realized, had a lot to do with how they adapted to their environment.

"It was fascinating to watch the Olympics this year to see who would fail and succeed, because they're all fast and strong but why does one person win and one doesn’t’?" Rufo told PhillyVoice. "It may be the situation of how they responded to stress.”

After doing some research circa 2012, he discovered Bo Hanson — also a rower — and his Athlete DISC profiles, which essentially tweak standard behavioral personality tests for athletes and sports teams. Determined to apply the concept to his coaching and strength training business, he trained with Hanson's Athlete Assessments company and added a personality consulting service to his offerings at Rufo Optimal Workouts, based in Conshohocken. By 2014, he was offering a three-pronged approach to psychological analysis for athletes: DISC, which evaluates behavior; PCM (Process Communication Model), which evaluates personality; and Myers-Briggs, which evaluates perception.

Part of its value in sports, he explained, is it teaches people to appreciate the process over the goal.

Rufo: 'It’s tough because we watch the movies and see these athletes trying to win, and figure that's how we have to be.'

Sports culture, he explained, tends to be very focused on winning. So, many are left perceiving their motivations as different from what they really are. An example: One rowing client of Rufo's is surrounded by dominant personalities on her rowing team, who do genuinely want to finish first place; but, he said, she often fails to realize that her personality is not motivated by the same outcomes.

"What I tell her before she races is I want her to remember why she’s there. 'What do you want?' ‘I want to win.’ ‘Is that really it?’ 'No, I want to row well for my rowing partner.' And anytime she’s done that, she’s scored well in the race," Rufo said. "When she tries to win, she’s not successful.

"It’s tough because we watch the movies and see these athletes trying to win, and figure that's how we have to be.”

Here's how the process works: Rufo sends clients a self-survey to fill out, which asks them to choose from a short list of words that best describes their behavior and personality traits. In the Athlete DISC survey I tried, I was given adjectives like "Bold," "Even-Tempered," "Outgoing" and "Receptive," and asked to pick one that was "Most Like Me" and "Least Like Me." After filling out additional, open-ended self-assessments, I was sent back a 44-page report to go over (don't worry, you're fine to just read the first 20 pages), which mapped my "Natural" behavior (that is, how I innately want to behave in a stressful scenario), as well as my "Adapted" behavior, or how I tend to actually behave in a high-stress environment. In the test, "D" marks dominant, goal-driven personalities; "I" marks influential people, who are outgoing and ask questions; "S" marks steady people, those who are systematic; and "C" marks conscientious people — anyone who follows the rules and is particularly analytical. 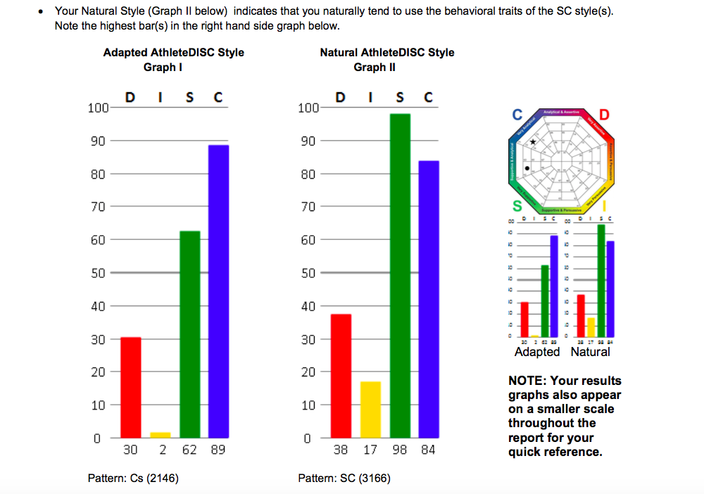 An example of an Athlete DISC report.

After reading the report, which explains where you fall with each of the categories (I was a high-C in my natural state and a high-S in my adapted state, in case you're wondering), Rufo personally conducts a consultation to explain the report and provide further analysis, going line by line through the report and crossing out assessments that, upon talking it out, do not apply. He then offers advice for sport or fitness goals and proceeds to map out a routine should you decide to purchase a monthly membership.

His hope, he said, is to make the DISC profile a more prominent part of his business and broaden who he reaches — noting that it's not just athletes who can make use of it, but a parent with a child in sports who wants to better understand their needs, or even just someone trying to lose weight or gain muscle, but feels more than their bodies holding them back.

"I think it could really work well in the fitness community because it’s really hard for people to lose weight or gain in fitness if they can’t use the right environment for them," Rufo said. "In CrossFit, for example, the community is close. But for some people, that might be too close."

Ultimately, his approach is to offer people just a little more self-awareness.

For now, a one-time profile consult costs between $79 and $99 and can be done remotely. Personal training memberships, meanwhile, include the profile as well as training with kettle bells and club bells in his private studio; that can be purchased with a monthly fee. Rowers can also sign up for training, held at the Fairmount Rowing Association, on Boathouse Row.