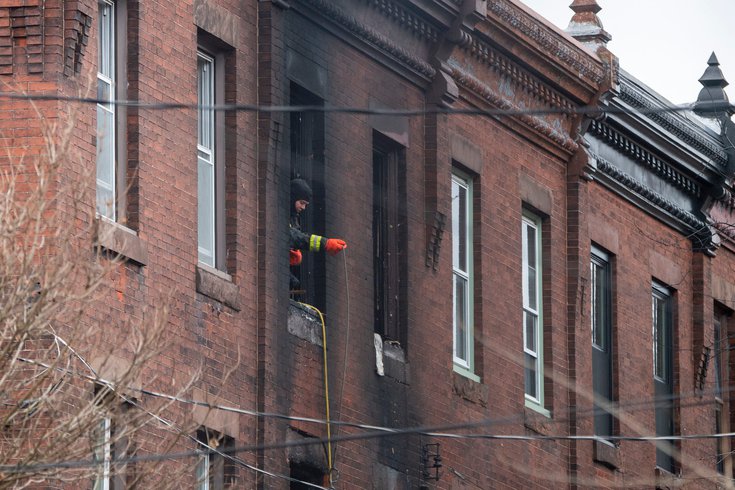 Wednesday's fire inside a Fairmount rowhome killed 12 people, including eight children. Fundraisers have been created for people to make donations to the survivors of the fire, including one via the Fund for the School District of Philadelphia. In the photo above, a firefighter leans out a window of the property on the 800 block of North 23rd Street on Wednesday, jan. 5, 2022.

Philadelphia is still reeling from Wednesday's fatal fire in a Fairmount rowhome that left 12 people dead, including eight children.

At least two others were injured in the blaze at 869 N. 23rd St. and taken to nearby hospitals. Eight more people fled the building on their own after it went up in flames.

To help the survivors, several fundraisers have been started to collect donations. Listed at the end of this article are ways in which you can help the families impacted by the rowhome fire.

A total of 26 people resided in the three-story building's two apartments, fire officials said Wednesday. At least 22 were inside at the time. Firefighters rescued one child from the fire, but the child did not survive.

As of Thursday afternoon the investigation in the cause of the fire was continuing, and the identities and ages of the children who were killed were unknown.

Here are some ways to help. This article may be updated as other ways to contribute to those who survived the fire arise

The Fund for the School District of Philadelphia

The Fund for the School District of Philadelphia is collecting donations that will go directly towards supporting the families impacted by the fire. The funds will be allocated based upon the families' greatest needs.

Several of the children who died in the rowhome fire attended Philadelphia public schools, including Bache-Martin Elementary School in Fairmount.

The Family Support Fund is a coordination between the School District of Philadelphia and the offices of Mayor Jim Kenney and City Council President Darrell Clarke. One-time or recurring donation options are available.

"Our thoughts and prayers are with the family members, friends and school communities who are grieving this unimaginable loss," the school district said.

Children First PA, the non-profit formerly known as Public Citizens for Children and Youth, is collecting donations for the families of the victims. The organization typically focuses on policy and law changes.

"But the sheer number of children who died in this tragic situation moved us so much that we thought to use our existing fundraising infrastructure and community reputation to collect some money for the families," the organization wrote. "Our thought was that a handful of our supporters would also be moved and would make a contribution."

Children First PA said that they will work with Bache-Martin Elementary, as well as the mayor's and council president's offices, to get the money into the hands of the families.

There are now three verified fundraisers on GoFundMe started to help the Fairmount fire victims, a spokesperson for the crowdfunding platform said Friday.

One campaign was created to help cover the funeral expenses for the 12 people who died in the fire. By early Saturday it had raised more than $267,000 from more than 5,300 donors, and it surpassed the campaign's goal of $100,000 in less than a day.

Any additional money that is not used for funeral arrangements will go towards resources for the survivors.

"This has devastated our entire family and we are humbly asking our community for assistance," organizer Andrea Bronson writes. "We are appreciative of any support and prayers extended to our family as we deal with this overwhelming loss."

The Help 4 Howard fundraiser is to assist a man only identified as Howard who lived in an apartment in the North 23rd Street building with several of his children and other family members, at least some of whom died in the fire.

Howard escaped but he was seriously injured, Tim McAdams, the organizer of the GoFundMe writes. Howard had been released from the hospital the day before the disaster, and was home recovering from "heart-related surgery," according to the fundraiser post.

Yvette Woods lived in the building with her daughter and three grandsons. They all escaped but lost everything in the fire. The donations collected will be used to help the family rebuild their lives, Woods' sister Debra Jackson says in the GoFundMe post.