Philly residents can get free smoke detectors by calling 311 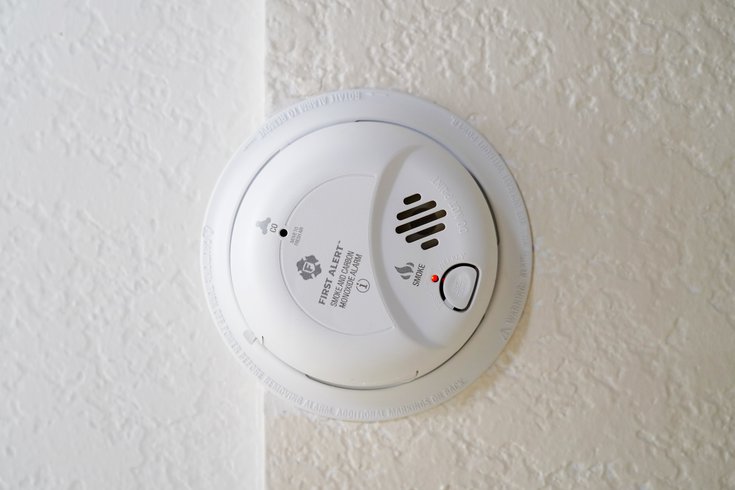 Smoke detectors increase the chance that people will escape from a fire. Of the roughly 2,000 annual fire deaths in the U.S., about two-thirds happen in buildings without functioning smoke alarms, according to the U.S. Consumer Product Safety Commission.

People who need to install smoke detectors in their homes often can get them for free.

Philadelphia provides smoke detectors for free through its 311 services. In the suburbs and South Jersey, the American Red Cross distributes them for free.

This week's devastating rowhome fire in Fairmount, which killed 12 people, including eight children, renewed attention to the importance of smoke detectors and fire safety measures.

Smoke detectors increase the chance that people will escape from a burning house. Of the roughly 2,000 annual fire deaths in the U.S., about two-thirds happen in buildings without functioning smoke alarms, according to the U.S. Consumer Product Safety Commission.

How to get a free smoke detector

In Philadelphia, homeowners living in a one- or two-family building can call 311, use the Philly311 app or fill out an application on the city's website to have the fire department install a smoke alarm free of charge. It may take up to 60 days for the fire department to install it.

Rental properties that lack working smoke detectors are in violation of the city code. Renters are asked to report such problems to 311 so the city can send out an inspector.

Outside of the city, residents can request free smoke detectors from the American Red Cross.

Residents in Bucks, Chester, Delaware and Montgomery counties can submit online applications through the Red Cross of Southeastern Pennsylvania.

South Jersey residents can submit an online application through the New Jersey branch.

Where to install smoke detectors

Smoke detectors give off three loud beeps to notify anyone in the building when they sense a potential fire.

There should be at least one smoke detector on each level of a home and one in each sleeping area, the National Fire Protection Association advises. They should be installed on a ceiling or high on a wall away from the kitchen, to prevent false alarms.

Smoke detectors should be tested monthly and replaced once every 10 years to ensure they work properly. If the batteries are dying, an alarm generally will chirp once every 30-60 seconds.

Additionally, children should be taught to recognize the sound of a smoke detector and how to respond when one goes off, the American Red Cross advises.

Other important devices that keep households safe are carbon monoxide alarms, which should be installed near bedrooms and regularly tested, and sprinkler systems.

How to prepare for a fire emergency

It's important for every household to have a plan in case of a fire, the Red Cross says. Everyone should know two ways to escape from each room in a house and families should set up a designated meeting spot outside.

Families also should set up a communications plan with a designated person to contact in case household members can't find each other.

Households are advised to practice escaping their homes twice a year. Someone can press a smoke detector test button or yell "fire" to alert people to the drill. It's also important that everyone in the household, including young kids, knows how to call 911 and how to stop, drop and roll if their clothing catches fire.

At night, people are advised to close bedroom doors. That creates another obstacle for a fire to burn through before it reaches the occupants.

How to prevent house fires

The National Fire Prevention Association also provides simple tips that can prevent fires from happening in the first place.

It's important that people pay close attention when cooking. They should stay in the kitchen when grilling, frying or otherwise using heat. If they must leave, they should turn off the stove.

Smokers should be asked to go outside and be provided with sturdy ashtrays so their refuse can be contained. Matches and lighters should be kept in a safe, secure place where small children can't get to them.

Additionally, electrical cords should be inspected regularly and replaced if cracked or broken.

How to respond to a fire

In the event of a fire, the Red Cross advises people to leave the building immediately, stay outside and call 911 as soon as possible. It's important that people leave any objects or possessions, as they can be replaced. A life can't.

Although fire extinguishers are a good thing to have on hand and know how to use, Philadelphia fire officials recommend exiting the building unless someone's life is in danger.

If people hear a smoke alarm, it's best to get on the ground and crawl, as that's where the cleanest air will be. On the way out, people should repeatedly yell "fire" to notify anyone else who might be in the building.

People should use the back of their hands to test the temperature of a door. Burning the palms of the hands makes it harder to crawl to safety.

If the only option is to escape through smoke, people are advised to get as low as possible and close any doors behind them as they go.

If smoke or heat is blocking all exits from a room, people should close the doors, stay put and call 911. Wet towels can be placed beneath a door and windows should be opened, if possible. If they can, people should wave a bright piece of cloth or shine a flashlight out the window.

When exiting apartment buildings, people should take the stairs instead of an elevator.