How to survive: Rowhouse or high-rise fire

A quick response can make all the difference, fire officials say 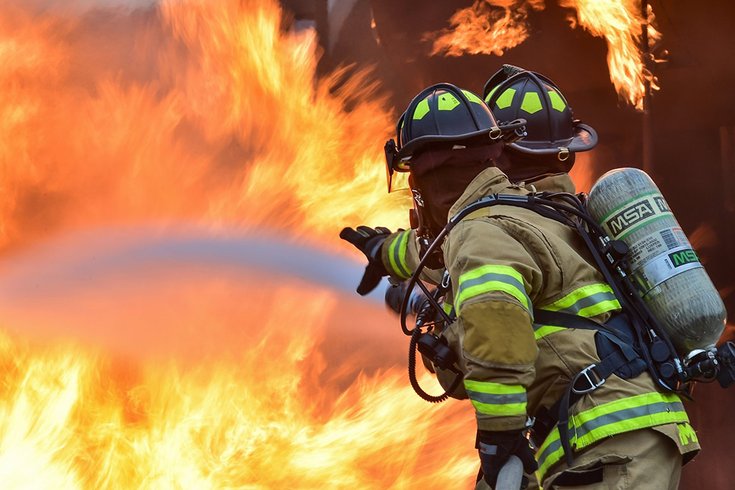 Smoke alarms typically sound about 6-to-8 minutes before flame is visible. This is the time to enact your emergency response plan.

The Philadelphia Fire Department responds to at least 44,000 fire calls each year, ranging from small kitchen fires to high-rise blazes.

In 2017, there were 20 fire fatalities in the city. Already this year, there have been more than a dozen fire fatalities, including a Philadelphia firefighter. Many of those deaths might have been prevented by a smoke alarm.

If fire ever strikes your home or office, you can reduce your risk of dying with good prevention and response plans, and practical safety knowledge, fire officials say.

• Install smoke alarms on every floor of your house. The Fire Department has 26,000 fire alarms and 4,000 adaptive smoke alarms for people with hearing disabilities. Any city resident who calls 311 can have one installed for free. "It's that simple," Kane said.

• Install a carbon monoxide alarm near the bedrooms of your home – not in the basement. Kane recommended purchasing CO alarms that include a readout. That way, residents can tell when CO levels spike and if they have returned to normal.

"In those first few minutes, you're on your own. How you react at that particular time can be the difference of whether you survive the situation." – Philadelphia Fire Lt. Bernard Gilliam

• Develop an emergency response plan that includes an evacuation plan and designates a meeting place. "A meeting place is one of the most key parts to it," Kane said. "Get out and make sure everybody meets at the same place so you don't go back in looking for somebody who is already out."

• Schools and other institutions conduct regular fire drills. So should your household. "Everybody can relate to the fact that very few people burn up in a school," Gilliam said. "Most (fire victims) are in their homes. So why not be prudent and practice a fire drill within your own home?"

• Close your bedroom door at night. If a fire does occur, a closed door provides an extra barrier from fire, slowing its progress and protecting you from smoke and toxic gases. It could give firefighters additional time to reach you.

IF A FIRE BREAKS OUT IN YOUR ROWHOME:

• Smoke alarms typically sound about 6-to-8 minutes before a flame is visible. This is the time to enact your emergency response plan. "In those first few minutes, you're on your own," Gilliam said. "How you react at that particular time can be the difference of whether you survive the situation."

• When an alarm goes off at night, sit up in bed, roll onto the floor and crawl to the door. It is essential to remain low, because the air is cleanest near the floor.

Once you've left a burning building, do not go back inside. "You have to stay out. Because going back in, that's when people die," said Battalion Chief Thomas Kane.

• Touch the door with the back of your hand to see if it is warm. Do not use your palm. If it is hot, it could burn your hand, making it more difficult to crawl to safety. If not, open the door, peer out and exit the house if the pathway is clear.

• If the exit is blocked, immediately shut your door. Seal the gap beneath the door, turn on the lights and grab a bright article of clothing to wave. Holler out the window, "Help, fire!" to alert neighbors to your emergency and location. "Not just 'Help,'" Gilliam said. "You yell 'Fire!' 'Fire!' gets people's reaction to understand that it's a fire." If your room gets smoky, stay low and breathe through a wet towel, only through your nose. 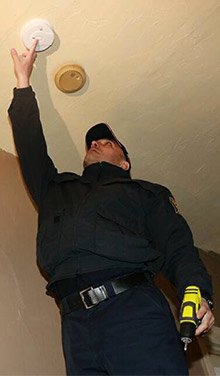 • Once you've exited the building, do not go back inside for any reason. Communicate clearly to firefighters where any people or pets might be located inside the home. "You have to stay out," Kane said. "Because going back in, that's when people die."

• Only use a fire extinguisher if someone's life is at stake. "Other than that, it's just stuff," Gilliam said. "Call the fire department and let them help you." Too often, fire extinguishers have not been properly tested and residents don't know how to use them correctly. A live fire is not the time to troubleshoot.

• If you live or work in a high-rise, know the emergency and evacuation plan. All high-rises are required to present it to occupants. Hotels often post it on the back of your unit's door. And apartment and condominium complexes typically provide it with various other paperwork. Know your workplace fire safety plan.

• There are three basic high-rise emergency plans. A so-called "leave" plan calls for everyone to leave the building once an alarm goes off. A "hold" plan orders occupants to go into the stairwell, close the door and wait for instructions from the P.A. system. And the "three-floor plan" instructs occupants of the floor affected by the fire to evacuate while ordering people on the the other two floors to hold in a stairwell, awaiting further instruction.

• If trapped, shelter in place. Close your doors, place a towel under the door and wait for firefighters. "If the fire is in the hallway, there's not a whole lot (of options)," Kane said. "It's kind of scary. Waiting is the option at that point."