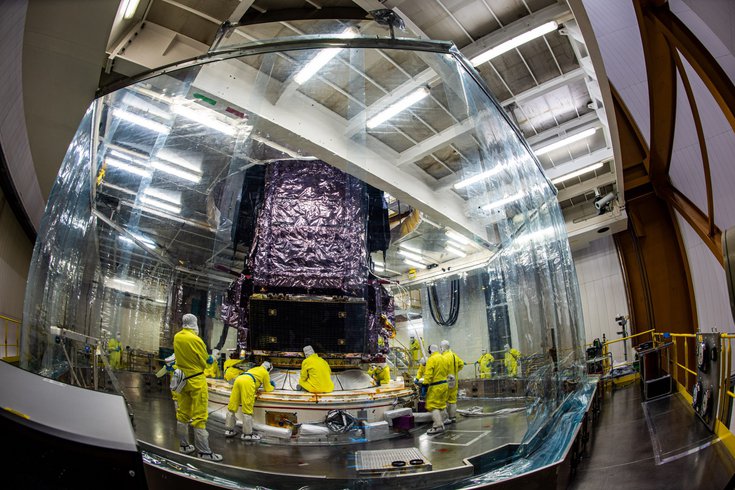 The James Webb Space Telescope, a trailblazing $10 billion space observatory, is set to launch aboard an Ariane 5 rocket from the Guiana Space Center on Christmas morning, Saturday, Dec. 25. The historic launch will be streamed online by NASA and is scheduled to take place between 7:20 a.m. and 7:25 a.m. Eastern time.

On Christmas Day, NASA will launch the world's most powerful telescope into space, an ambitious successor to the famed Hubble Space Telescope that has served as humanity's crowning scientific observatory of the universe.

The launch of the James Webb Space Telescope on Saturday morning will culminate a groundbreaking mission that has been in the making for more than two decades. NASA has collaborated on the next-generation project with the European Space Agency and the Canadian Space Agency, who contracted Northrop Grumman to build the roughly $10 billion flagship observatory.

There are a number of ways that viewers can tune in online to watch the much-anticipated launch, which is scheduled to take place between 7:20 and 7:52 a.m. Eastern time. The Webb Space Telescope will launch from the Guiana Space Center in Kourou, French Guiana, where it will be housed within the space agencies' Ariane 5 rocket.

Several English-language streams will be available from NASA, including on the NASA Live platform and the agency's Facebook, Twitter, YouTube, Twitch and Daily Motion channels. NASA's coverage will begin at 3 a.m. Christmas morning, with more detailed launch coverage starting at 6 a.m.

Live views of the launch will be available from Webb's Ariane 5 launch site, NASA's Goddard Space Flight Center in Greenbelt, Maryland and from the Space Telescope Science Institute in Baltimore, the home of Webb's mission operations center.

On launch day, a “clean feed” of the launch without commentary will be available by satellite beginning at 7 a.m. and continuing for an hour after launch, NASA said in a news release about viewing options. NASA also maintains a James Webb Space Telescope blog that provides regular updates on the status of the mission.

In addition to NASA's coverage, Space.com will be streaming the launch along with live updates before, during and after the event.

NASA administrator Bill Nelson described the Webb Telescope as a landmark scientific achievement that will "open up secrets of the universe that will be just stupendous, if not almost overwhelming," Space.com reported.

"[Webb is] going to look through a keyhole in the sky," Nelson said. "In one case, it's going to peer back over 13 billion years to capture infrared light from light emitted at the formation of the very first galaxy about 250 million years after the Big Bang, which was 13 and a half billion years ago."

The Hubble Space Telescope revolutionized astronomical observation when it went into orbit 31 years ago, helping pin down the age of the universe, identifying moons and black holes in distant galaxies and determining the rate at which the universe is expanding.

The James Webb Space Telescope will expand on these powers astronomically with a new set of missions that enable research to reach parts of the universe from vantage points that have never been achieved.

Unlike the Hubble, which orbits about 350 miles above Earth's surface, the Webb telescope will be positioned roughly 1 million miles from our planet. It will not be within reach of service and will be focused on the observation of light from the early universe, revealing new insight into the formation of the earliest stars and galaxies, while maintaining and enhancing the study of objects within our solar system.

Among the greatest technical achievements of the Webb Space Telescope is its array of micro-shutters, a postage stamp-sized device that includes nearly 250,000 tiny windows that open and close to capture light. The full telescope weighs about 13,668 pounds, compared to the 24,000 pound Hubble Telescope at the time of its launch. The Hubble will remain in orbit and continue to serve as a complementary observatory.

Major innovations on the Webb Space Telescope include lightweight optics, a deployable sunshield, a folding segmented mirror and cryogenic actuators that enable the mirrors to achieve the perfect focus and temperatures to capture infrared light.

The journey to Friday morning's launch was beset by cost overruns and delays that repeatedly put the mission in jeopardy, according to a timeline recounted in a preview of the event from The New York Times. Even in the days leading up the launch on Christmas, the space agencies have revised their schedule multiple times to ensure the best possible atmospheric and technical conditions for a successful mission.

For ongoing updates about the launch of the James Webb Space Telescope, keep an eye on NASA's blog and social media channels.