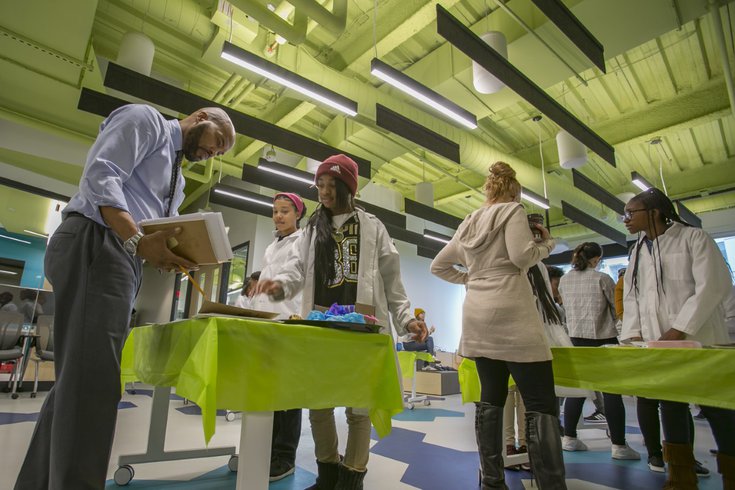 The University City Science Center, through grant funding from the Dept. of Education, will expand its FirstHand STEM educational initiative, bringing in over 300 students from eight West Philadelphia schools to participate in the supplemental, skills-based curriculum.

The STEM-achievement gap in K-12 schools has been a well-documented issue throughout the nation.

In order to try and close that gap, Pennsylvania and Philadelphia have been providing outreach to underserved communities and encouraging interest in science education. With the help of local organizations, many young people have received training for future achievements in the field.

On Monday, eight West Philadelphia-area schools were chosen to participate in the University City Science Center's FirstHand STEM educational program, as a result of a $3.9 million grant awarded to the organization by the U.S. Department of Education.

"The Science Center is ensuring that Philadelphia youth can participate in and benefit from the regions' thriving life sciences ecosystem," said Tiffany Wilson, president and CEO of the Science Center. "FirstHand's unique combination of STEM career exposure, industry-informed curricula, and project-based learning helps put students on that pathway."

The additional grant funding will enable the Science Center to work with over 300 middle schoolers in the area at their skills lab, located at 3675 Market St. in uCity Square. The schools selected for the program through Monday's expansion include six public middle schools and two charters.

Established in 2014, the Science Center's FirstHand program was designed to create STEM career pathways for underserved Philadelphia students. Since its creation, it has served 3,600 students from 16 middle schools and three high schools in the city. Additionally, the program has worked to engage industry professionals from around the city, particularly within University City, to mentor students and offer career exposure.

Research by the Department of Education found that during the 2015-2016 school year, 55% of schools with high Black and Latino enrollment offered advanced mathematics courses, compared to 65% of all high schools.

And despite STEM careers becoming some of the fastest growing across the country, disparities in opportunity and exposure to science education influences achievement and participation from students in underserved communities.

The University City Science Center is just one of many organizations in Philadelphia working to close the achievement gap.

A $1 million February investment from GlaxoSmithKline to several Philadelphia-based non-profits aimed at addressing the achievement gap and improving opportunities and achievements in STEM, brought additional funding to programs across the city.

These include the College of Physicians STEM Internship Program, The Pennsylvania Society of Biomedical Research, The Philadelphia Robotics Coalition, and the Wistar Institute Accelerated Biomedical Technician Training Program, which provided 15 paid internships for Community College of Philadelphia students.

PhillyMag reported last year that despite the city being the eighth largest hub for STEM careers, the lack of trained workers in the field could lead to a widening of that gap as the industry continues to grow. They note that in Philadelphia, the problem "begins in middle and high school, where Keystone exam results show the city's students lag behind their Commonwealth peers in STEM literacy."

Researchers note in Educational Researcher that supplementary science programs – including something like the FirstHand program at the Science Center – could help decrease the science achievement gap post-primary school for underserved and low-achieving school communities.

Other than FirstHand, the Department of Education's award included $3.9 million in grant funding for Children First PA, an advocacy group that works to advance educational opportunities for children in Southeastern Pennsylvania.