Speaking at the National Constitution Center, the Pennsylvania native made the 'moral case' for protecting ballot access 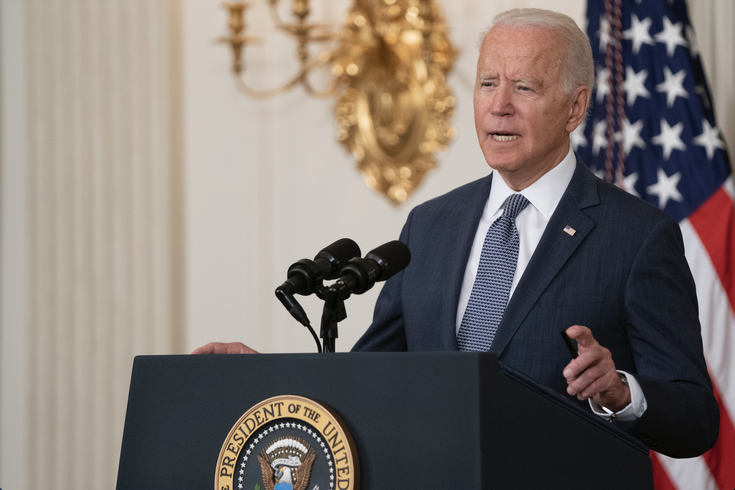 President Joe Biden is scheduled to deliver remarks about voting rights in the United States at the National Constitution Center in Philadelphia, starting at 2:50 p.m. on Tuesday, July 13, 2021.

President Joe Biden was at the National Constitution Center in Philadelphia on Tuesday afternoon to deliver a speech on voting rights and ballot access in the United States.

The president's remarks can be viewed using the livestream below (full recording):

In advance of Biden's speech, White House press secretary Jen Psaki said the president planned to address growing concerns about Republican efforts across the country to tighten access to voting.

"He’ll lay out the moral case for why denying the right to vote is a form of suppression and a form of silencing," Psaki said Monday. "He will redouble his commitment to using every tool at his disposal to continue to fight to protect the fundamental right of Americans to vote against the onslaught of voter suppression laws."

Biden has come under increasing pressure from Democrats and progressives to back up his commitment to ensuring that new laws passed by Republican legislatures do not restrict democratic rights, particularly as momentum begins to build for the 2022 midterm elections.

Democrats attempted to pass the For the People Act last month but were shot down by a Republican filibuster in the Senate. The bill had aimed to simplify voter registration and ballot procedures, reform campaign finance and require non-partisan commissions to draw congressional districts, among other measures.

In Pennsylvania, Republican state Sen. Doug Mastriano has pushed for an audit of the 2020 election similar to the heavily criticized effort underway in Arizona. Gov. Tom Wolf condemned Mastriano's initiative, calling it a sham and a waste of taxpayer money. Many Republicans continue to question the validity of the 2020 election, despite no finding of widespread fraud last November.

Psaki said last week that Biden has not ruled out pursuing actions other than legislation in order to protect voting rights, if necessary.

"The president would love to sign a piece of voting rights legislation into law. He is — looks forward to doing that," Psaki said Thursday. "But he also knows that there are a number of levers from the federal government that we should continue to use, and he's not waiting to have the legislation on his desk."