Howard, Ruf homer for Phillies in 6-3 win over Braves 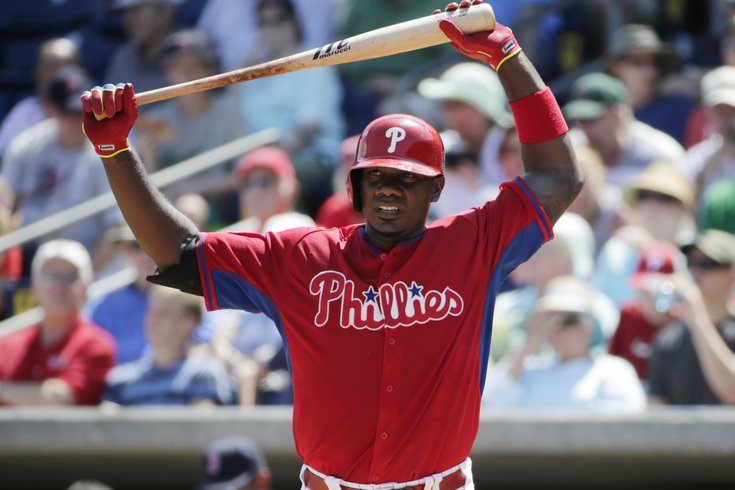 Ryan Howard hit a home run in four at-bats Tuesday to raise his average to .217.

KISSIMMEE, Fla.  — Nick Markakis made his debut in the outfield for the Atlanta Braves and said he felt ready for opening day after playing six innings Tuesday in a 6-3 loss to the Phillies.

Markakis signed a four-year, $44 million contract with the Braves in the offseason and had surgery Dec. 17 to repair a herniated disk. He saw his first game action Monday, going 2 for 3 as the designated hitter. He went hitless in three at-bats Tuesday.

"I had a good feeling out there," Markakis said. "I need to make some more throws, but my swing is feeling good. Right now, it's all about my timing."

Markakis won a Gold Glove last year in Baltimore and is going to replace Gold Glover Jason Heyward in right field for Atlanta. Markakis had a down year at the plate, batting .276 with 14 homers and 50 RBI.

"I feel better than I thought I would today," Markakis said. "I just need more plate appearances."

Markakis said he would be playing in minor league games just to get some extra at-bats.

Braves manager Fredi Gonzalez said the minor league games might be even more important than the regular Grapefruit League games for now. He said that, with the relaxed rules in minor league spring training games, Markakis could lead off in almost every inning and take a break.

"He should get about 35 at-bats before opening day, but I have no doubt he will be ready," Gonzalez said. "With the minor league games, he'll get plenty of at-bats."

Ryan Howard hit his third homer of the spring for the Phillies. Darin Ruf added three hits and a homer.

Eric Young, Jr. upped his spring average to .314 with three hits for the Braves and Andrelton Simmons hit his second homer of the spring.

Braves: Mike Foltynewicz struggled again in his attempt to make the Braves' rotation. He allowed three runs in 2 2-3 innings and has allowed runs in each of his four starts. He said he felt fine but frustration is setting in.

"I just made some bad pitches," he said. "I battled the best I could. I always try my best and when you do that, there's not much you can do about it."

Fredi Gonzalez said he is being patient.

"You never know what somebody is thinking, but he was just missing around the plate," Gonzalez said. "He needs to mix his pitches up. The guys at this level can hit a bullet."

Phillies: Miguel Gonzalez will make his fifth start of the spring at Clearwater against the Houston Astros. He has a spring ERA of 6.97.

Braves: After Wednesday's open date, Wandy Rodriguez will make his fifth start of the spring against the Pittsburgh Pirates. He's allowed one run in 13 innings and has gone 12 innings without allowing a run.

Phillies: RHP Aaron Harang pitched in a minor league game in Clearwater on Tuesday. He has missed several starts this spring with back problems and is day to day. ... OF Domonic Brown still has tendinitis in his left achilles. There is no timetable for his return.

Braves: The depleted staff maybe getting a break. Mike Minor will start pitching off the mound on Wednesday. Minor has been out all spring with lingering left shoulder discomfort that started last season when he went 6-12 with a 4.77 ERA.