If Rhys Hoskins homers and no one is there to see it, did it actually happen? 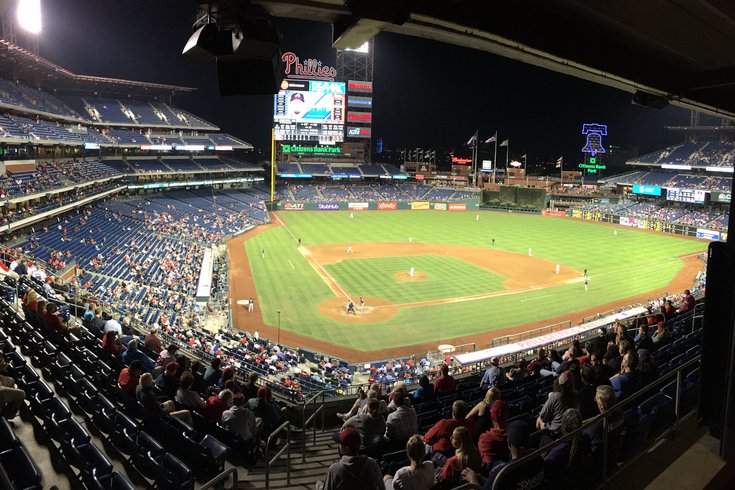 The Phillies announced a paid attendance of 15,154 on Monday night. It was the smallest crowd of the year and the lowest paid attendance at Citizens Bank Park since Oct. 1, 2015.

On a night when Eagles long-snapper and illusionist Jon Dorenbos, the longest-tenured athlete among Philadelphia four major pro sports teams, was traded to the New Orleans Saints, the magic ran out at South Philadelphia’s 14-year-old ballpark, too.

The Mighty Rhys Hoskins did not homer. But there was still joy in Philliesville.

While his run of homering in five straight games (and in eight straight days the Phillies had a scheduled game) came to an end, Hoskins still finished 2-for-4 with an RBI and two runs scored. Hoskins’ one-out, run-scoring double in the sixth inning came a half inning after the Atlanta Braves tied the game and would go down as the game-winning hit.

All of this makes you think it’s been the kind of history-making performance (no one has ever reached 11 home runs faster in MLB history than Rhys Hoskins) that it would energize a dormant fan base, right? Hoskins homering in every game of the homestand (save the nightcap of last Tuesday’s doubleheader) would have to bring Philadelphians through the turnstiles on a cool but comfortable August evening with Aaron Nola on the mound, too, right?

The announced attendance on Monday night at Citizens Bank Park: 15,154.

It was 71 degrees when Nola delivered the first pitch.

"Hopefully," Mackanin continued, "as we go along fans will come out and see (Hoskins), as well as a few other guys."

If thats the paid, gotta take at least 4,000 off the top for actual gates.

About that Oct. 1, 2015 crowd: it was the fourth-to-last game of a season in which the Phillies barely avoided losing 100 games, on a school night (a Thursday night), with the NFL in full swing (the Ravens beat the Steelers in overtime that night). Also, starring in that Oct. 1 , 2015 game: Chase d’Arnaud started at shortstop and Jeff Francoeur hit cleanup.

About Monday night: Hoskins, who has made his plate appearances must-see events in the last week, hit cleanup. Perhaps people were tuned in at home on their TVs.

“Well, I guess all other eight of us aren’t good enough,” joked catcher Cameron Rupp, who hit his 14th home run of the season in the Phillies win.

The Phillies are just four games under .500 since the All-Star break. But, yes, still the worst team in baseball.

But, also the team that has baseball’s hottest home run hitter this side of Giancarlo Stanton in the middle of their lineup. Isn’t that something people would want to come see for themselves on an August night?

Rupp asked a media relation person if schools are back in session.

So, Pennsylvania suburbs then, I guess.

Wait, not all of them. A fellow reporter with young kids who lives in the PA suburbs said his kids aren’t back in school until next week. Where’s that thinking emoji when you need it.

It's quiet up here... pic.twitter.com/lCm1r2Vocz

Whatever, it was just puzzling (and for Phillies' brass, troubling?) that the smallest crowd of the season coincided with a day that began with Hoskins having the chance to become the first player in the 135-year history of the Phillies to homer in six consecutive games.

But he didn’t homer, so, you win, Fans Who Stayed Home.

“They didn’t miss anything tonight,” Rupp said. “He only hit a double. Clearly, it wasn’t very good.”

Hoskins, of course, did just fine in collecting the game-winning hit and running his hit streak to 10 straight games and his RBI streak to six straight. Hoskins’ 25 RBI this month are the most by a Phillies rookie in a month since Willie Montanez drove in 29 in June of 1971, the first year at Veterans Stadium.

“I didn’t even want to give him a high five,” Rupp said (while wearing a smirk) of Hoskins’ go-ahead double. “‘Dude, that’s not good enough. I mean, what you’ve been doing the last 10 days, where’s that been for the last four at-bats?’”

Hoskins will have an opportunity to get his act together and stop letting people down on Tuesday night, when the Phillies and Braves play the second of a three-game series at Citizens Bank Park. Perhaps a few thousand people will show up to the ballpark, too.

A random sampling of Twitter reaction to the irony of the lowest attendance of the season coinciding with Hoskins' scorching run (see, even though people aren't at the game, they are at least watching!):

Guess all those fans who claimed they weren't coming to any games until prospects were called up are all out of town tonight. 🤔 https://t.co/AOquDXkNHZ

I'm sure they have their Rhysons for not coming.

Some folks take this week for vacation also,, summer is winding down

maybe Rollins was right. Philly fans complain about state of sport franchises but only 15K show up to see Hoskins & Nola.

Wait, what was it Jimmy Rollins said again? Oh, right.

According to the folks at baseball-reference.com, the Phillies have only had two games since 2003 with lower paid attendance than Monday night.