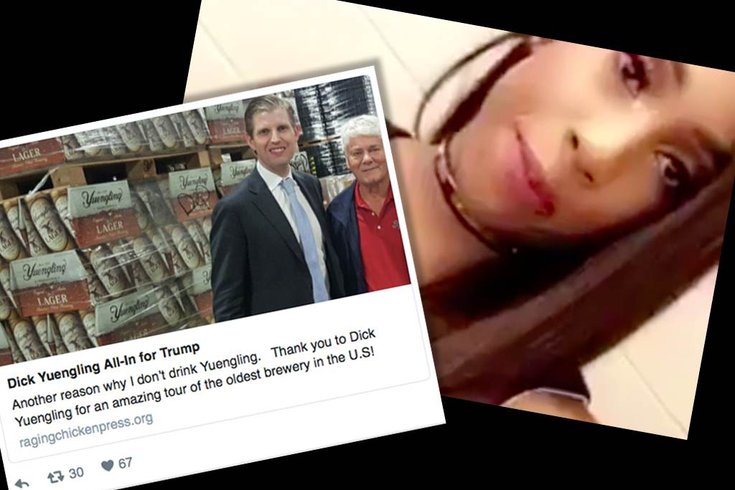 Today’s as good a day as any for a discussion about boycotts, what with the outcry regarding a Pennsylvania beer company’s apparent support of Republican presidential candidate Donald Trump.

It hinges on six words uttered by beerman Richard “Dick” Yuengling Jr. to son-of-candidate Eric during a Monday campaign stop in Pottsville.

“Our guys are behind your father,” Dick told Eric, a comment that opened the gates of criticism/threatened-boycott hell.

Though two of the 73-year-old brewery owner’s words spoke on behalf of “our guys,” that shouldn’t be construed to mean that everybody – well, every male – who works for the company backs Trump. The outrage train stops for no nuance, though.

“The only thing we love more than hearing our opinions validated is seeing someone squash the rights of others to share an opinion with which we disagree."

What Dick did was speak his mind, which is exactly what the potential boycotters are doing, as well.

There’s nothing wrong with that. This is America, a land of freedom to drink, or refuse to drink, whatever second-rate beverages we want.

One thing struck me about the day’s vehement, politically-based reaction as I flipped over to the Sixers game during a World Series commercial, though.

It was then that I saw one of the team’s dancers performed the anthem in lieu of a pre-advertised performance by Amber Denise “Sevyn” Streeter. Shortly thereafter, Streeter explained to her Twitter followers what had happened.

She was supposed to sing the anthem, but minutes before she took the mic, the team “said I couldn’t because I was wearing a ‘We Matter’ jersey.”

It would have been an in-your-face reminder of the Black Lives Matter movement, a heated issue to say the least, but no less heated than the morality cesspool better known as the presidential election.

Once controversy bubbled up on what should have been a celebratory night (despite a loss and middle finger-based ejection), the team issued a statement that can be described as tone-deaf at best:

The Philadelphia 76ers organization encourages meaningful actions to drive social change. We use our games to bring people together, to build trust and to strengthen our communities. As we move from symbolic gestures to action, we will continue to leverage our platform to positively impact our community.

Those three sentences say absolutely nothing about what happened Wednesday night.

Here’s what the Sixers actually did: They took steps to pre-emptively punish someone for wanting to speak their mind (well, express their political leanings through a garment worn at a high-profile moment, but still).

On my 20-minute drive into the office this morning, I listened to callers to a conservative talk-radio show bash Yuengling haters and celebrate the Sixers’ decision. They didn't realize they were saying, “The only thing we love more than hearing our opinions validated is seeing someone squash the rights of others to share an opinion with which we disagree.”

Not that it qualifies as scientific polling data, but a Twitter search for “Sixers boycott” exposed roughly three dozen tweets while the “Yuengling boycott” search has, well, more than that number in the past few minutes.

Still, these situations are a lot more similar than they appear.

Bashing Yuengling boycotters is a way of punishing them for wanting to punish someone else for expressing themselves.

Backing the Sixers is a way of celebrating those who punished someone who merely wanted to express herself.

Anything less is selective hypocrisy. Freedom-of-speech isn't a malleable construct; it's an all-or-nothing, take-the-good-with-the-bad proposition.