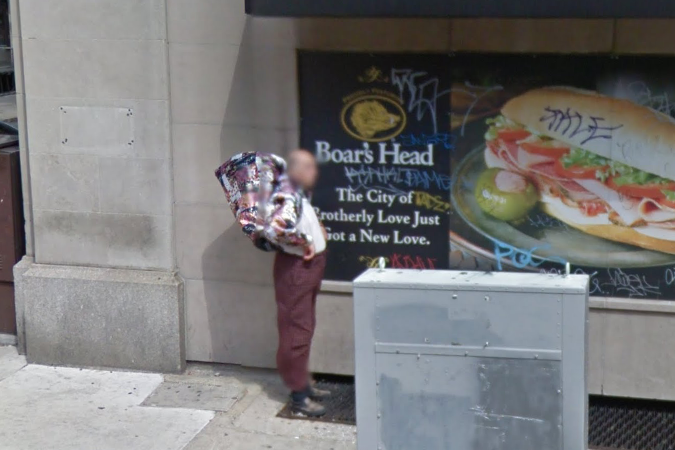 This dude airs himself out on a vent in Center City everyday.

Over the holiday weekend, I saw a wonderful Reddit thread that necessitated further sharing.

Yeah, yeah, yeah, I could’ve just retweeted it and called it a day, but this one’s special enough to save until after a holiday weekend.

The question that Redditor isshun-gah posed: “What is the weirdest s--- you've seen anybody do anywhere in the Philly Metro Area?”

Dear Lord, where would I even begin?

I mean, Milton Street’s coffin press conference immediately came to mind because of course it did.

That’s the mountaintop as far as it comes to political coverage this century. I’m sure there’s more that didn’t arise initially in my holiday-weekend mind, including a few from our "Odd News" files. (You may have been from Jersey, but RIP Blast anyway.)

Instead, here are the top five responses in that thread:

1. “People who continually take pictures of a dude minding his business while standing atop a vent grate.” (Context)

2. “Steal a cop car whilst under arrest, drive it over the Ben Franklin bridge, and continue to drive around Port Fishington until apprehended.” (Context)

4. “Saw a dude at like 3pm on a Friday that was 100% completely sober perform the most amazing act of controlled vomiting. It occurred in the big pots filled with plants along broad street near city hall.” (Thankfully, no context available)

That No. 5 entry was a bit of a stretch. It isn’t among the strangest things to ever happen in Philadelphia, obviously. Rather, it’s emblematic of A) condemnation of me posting it even further and B) the sudden realization that the other responses were way too ribald or tragi-pornographic for inclusion.

Obviously, we’ve all seen stranger stuff that warrants inclusion on such a list. You’re invited to add yours to the Reddit post – because it's just not right to swoop in and steal credit from the original source – or right here in the comments if you’re not on Reddit.