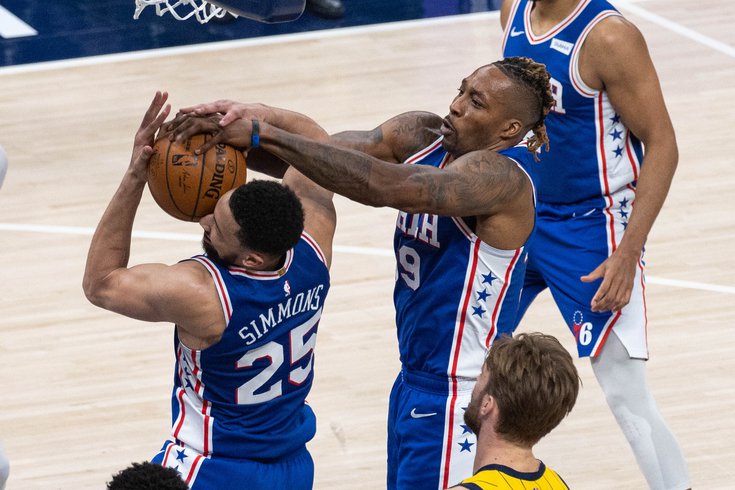 The Sixers are still working on clinching the No. 1 seed in the East.

The Sixers had a chance to lock up the No. 1 seed in Indiana on Tuesday night, falling short in a 103-94 defeat to the Pacers.

• Someone needed to step up and lead in Joel Embiid's absence, no matter how bad you think this version of the Pacers is. With a small lineup and shooting around him, Ben Simmons took that responsibility for himself in the first half, pacing Philadelphia with an opening stretch that should (keyword: should) have put this game out of reach.

Utilizing a smaller look with Mike Scott as the nominal center, Simmons had more driving lanes to attack than he could have asked for against Indiana. Still, that has been the case at times in the past with no results to show for it, and seeing Simmons power through that space to get to the rim is always a welcome sight.

To me, the most important part of Simmons' start was that he didn't allow so-so efficiency to dissuade him from attacking. A 3-for-7 start wasn't used to shift completely into playmaker mode, and by continuing to hunt his own offense, Simmons opened up more opportunities for himself as a passer, and by extension more open shots for his teammates.

This was the sort of performance they needed from him. At least, it was for the fist 24 minutes or so.

• It has been an absolute delight to watch Tyrese Maxey go to work lately, and it's scary to think that he has been able to take a step forward in spite of an inconsistent role and perhaps the weirdest NBA offseason for rookies of all time. I keep writing that he probably won't be in the playoff mix, but man, isn't he making Doc Rivers think hard about it?

Maxey's willingness to seek out contact and get to the rim is miles ahead of where it was when he started this season. His size appeared to be holding him back early on, with Maxey struggling to even attempt shots near the basket, and now he's finding pockets of space to score with relative ease. He has figured out how to overcome NBA size and length around the rim, critical progress if he's going to make it at this level.

There's just a little something extra with Maxey at the point of attack. His speed allows him to put pressure on the rim, and it is opening up passing opportunities for him on lobs and kicks to the corner, opportunities he is increasingly taking advantage of.

While we're on the subject of rookie performances, Isaiah Joe looked a little out of sorts during his minutes in the first half, and understandably so. The kid has been out of the normal rotation for a long time, and he was only thrust into action as a result of injuries ahead of him.

Credit to the young man for rallying when it mattered in the second half. Joe made a couple of big shots to preserve a narrow lead for Philadelphia, and in rather shocking fashion he made a defensive play or two as a help defender. The rookies are getting it done when their numbers are called, and it's a testament to the unseen hours in the gym.

• It's hard to figure why Seth Curry passes up as many open three-point attempts as he does. Early in this game, he was absolutely killing the Pacers, and he wasn't doing it by canning wide-open threes. On the contrary, he was banging home pull-up threes, sidestep threes, and pull-up jumpers, looking like a guy who could help carry the offense on a night off for Embiid.

But after that opening flurry, Curry created record-scratch moment after record-scratch moment, passing up great shots and forcing the Sixers to work that much harder for their offense. On a normal night with their full lineup, that's problematic for these Sixers, but it's even worse when Curry is having a lot of the offense run through or for him, only to turn down the quality looks they're able to create.

He has been more aggressive as of late, but he's still nowhere close to where he could be. Let it fly!

• If anybody could use a break between now and the start of the playoffs, it's Danny Green, who looked like he was moving in cement for a lot of Tuesday night's game. Doug McDermott is a decent NBA role player, but he was blowing past Green like he is one of the best athletes the league has to offer.

The worst sin Green committed against Indiana was getting absolutely cooked by McDermott (among others) on backdoor cuts, though he was far from alone on that front. With the Sixers opting to go small for long stretches of the game, you could see the impact a lack of rim protection made, with Domantas Sabonis picking them apart as a passer thanks to the vacated space in the paint.

(For the 300th time, that's one of the reasons I will always be skeptical about the ability to go small around Simmons on a more permanent basis. The Sixers were better than usual on defense out of that look, but the holes are easily exploited with even cursory studying from the opponent.)

Even if they get him burn in the games to come, Green will get some guaranteed R&R as a result of the play-in tournament between the end of the regular season and the start of the playoffs. That's good news for all of the vets, but especially a guy who has been on tons of deep playoff runs and looks a bit sluggish right now.

• I hope there is a better small-ball center option than Scott next year, because there is no universe in which this should be their top option when downsizing. You could argue that Doc Rivers could simply play a different look, and I would agree, but Daryl Morey could certainly stand to put a credible stretch five on this roster.

• Doc Rivers' refusal to use his challenges is pretty infuriating as a neutral party, so I can only imagine how it feels for you guys watching at home. Simmons' fifth foul was dubious at best, and since Rivers took a timeout on the very next play anyway, why wouldn't you just give it a shot in the hopes that you could erase a big call?

If you're telling me you're satisfied with a possession where he catches the ball at the three-point line and no one within 10 feet of him, only for it to end in a tightly-contested three from Scott in the corner, we simply won't be able to agree on much. When it is time for the best players to get their team over the line, Simmons is nowhere to be found on offense. That has been the case always, and it's still the case now.

And look, this was a good Simmons game! That is still true despite the second-half slowdown. But this is what you get with him.

• Seriously, those passed up Curry threes are brutal. If it was a bad shooter doing this, I get it, but come on!