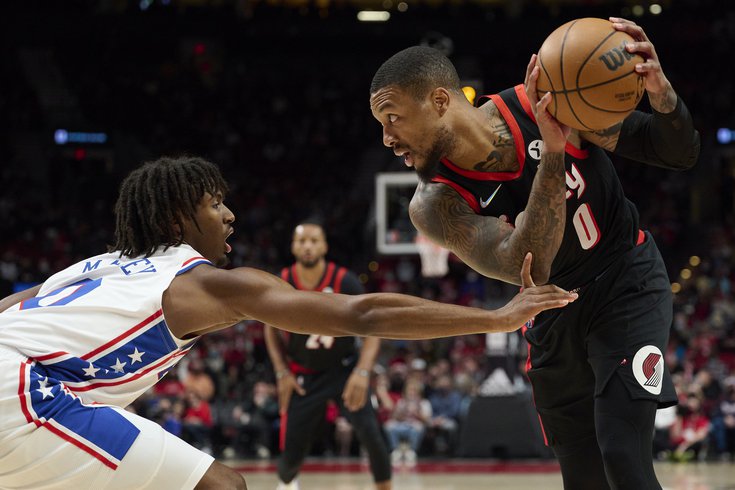 The Sixers were unable to contain Damian Lillard and the Blazers Saturday night.

Tyrese Maxey's fourth-quarter outburst allowed the Sixers to hang tough in Portland, but his efforts ultimately weren't enough in a 118-111 loss to the Blazers.

• For the first 2.5 quarters of this game, this was not an all caps TYRESE MAXEY performance that dragged the team to within arm's reach of a win, but there were a number of moves in this game that felt like the flashes people look back on later in a player's career and think that those moments were when they knew they were watching a future star. A spin move through two bigs to finish a layup in traffic, an and-one where he absorbed contact from Norman Powell and deposited a shot off the glass, and solid, no-frills playmaking to set up teammates for good looks that were few and far between.

Once the Sixers began to run the offense through him more, Maxey came up with some huge buckets in the fourth quarter to keep the game within reach, helping the Sixers claw back into this one in spite of how poorly they played for most of the night. It should scare opposing teams that Maxey has already figured out how to absorb contact and finish through and around bigger players, given how averse to contact he was when he first stepped onto the scene last year.

Some fault for the loss also belongs in the hands of Maxey, even though he played well relative to the rest of the group. If the point guard's job is to keep everyone happy and get the right guys touches, it was his job to call his own number earlier and more often. This should come with time, but he has to find a way to be even more assertive in such a situation.

But he's not the guy who deserves to get much blame after another excellent evening at the office. Watching this kid grow before your eyes has been the one shining light during a brutal stretch for Philly, and if he can sustain anything near this level once Joel Embiid returns, the Sixers will be off to the races.

• I have been pleasantly surprised by Charles Bassey's decision-making on the offensive end of the floor, where he has barely put a foot wrong over the last two games of meaningful action. Bassey's role is pretty simple — set hard screens, dive hard to the basket, and run the floor when they're on the break — but he's excelling in that context, picking his spots nicely and showing the potential for additions to his game as time wears on.

Bassey's passing has risen above expectations so far, with the Western Kentucky product making smart, instinctual passes when his other options are blocked off in the painted area. Whether he is coming down with offensive rebounds, catching a lobbed entry, or on-the-move after rolling toward the rim, Bassey has been able to keep his wits about him and find the open guy if and when the paint is walled off. For a guy with comparatively little basketball experience to his peers, he looks right at home on an NBA floor.

It'll sound crazy given their resumes and levels of experience, but I think he should be given a real shot to compete for the backup minutes behind Embiid when the franchise center returns. It has been rough for Andre Drummond as of late, and though I doubt Rivers goes this way, Bassey gives the coach and the team plenty to work with.

• This was a weird Tobias Harris game, and we'll get to the bad parts of it below. But this is one of the better games he has had attacking from the three-point line in a while, with Harris winning a lot of short foot races against Robert Covington to pile up points and even score through contact around the basket.

It shouldn't be a huge surprise when Harris thrives out of these sort of looks, because this is always when he looks his best. When Doc Rivers first arrived last season, Harris playing quick-decision basketball was the coach's major point of emphasis coming into the year, and he played his best when he embraced that philosophy, failing in the playoffs and late in the year when he played a slower, more deliberate basketball from the mid-post and in isolation.

If not for some tough calls against him in the first half — he got absolutely hammered for no call on a play in the first half, and picked up a phantom goaltend on a ball he never touched — it could have been an even better night for him.

• We have focused most of our negative energy on Philadelphia's defensive miscues recently, but this was the first time in a while you could say their offense was by far the biggest problem for the group. They did just about nothing right against the Blazers for roughly 3/4 of the first half on Saturday night, playing sluggish, sloppy basketball that led to a lot of possessions with late-clock attempts and ugly misses from all over the floor.

Some of it is a function of their personnel, surely. There were far too many possessions where the ball went to Shake Milton or Furkan Korkmaz to start a possession with very little movement or distribution of touches. Plays they attempted to run were slow-developing, and when the Sixers couldn't create an open look off of their initial execution, you could see a sort of panic set in as they reverted to isolation, hero-ball nonsense on too many occasions.

On a mission to bail them out of those issues, Tobias Harris ended up being the biggest culprit. After getting off to a hot start attacking former Sixers forward Robert Covington, Harris' luck ran out quickly, and he took too many possessions down to the mid-post where they would die in his hands. Instead of taking advantage of the difference in foot speed, Harris tried to go through him physically, and Covington ended up winning a lot of those battles with core strength and quick hands.

The frustrating part with Harris specifically is that he had a good night when he was a secondary option on the weak side of a play. When Philadelphia ran pick-and-rolls using another player and left Harris in a spot in the corner or the free-throw line extended, he got good looks from three and attacked closeouts with pace and power, getting to the rim and drawing fouls. But he ended up dooming them with his bad habits, which ended up being more meaningful than anything else about his night.

When the Sixers did create good looks, they also shot poorly as a nice cherry on top. Seth Curry's dry spell from deep continued, Furkan Korkmaz's cold stretch looks like the Arctic Circle, and Georges Niang was basically the only guy to get in any sort of groove.

• One thing Maxey needed to do better — the Sixers needed him (and other players, in fairness) to be more of a risk-taker when the Blazers sent traps early in possessions. With a pass over the top or splitting his defenders in that scenario, Maxey is hitting Drummond or Bassey going downhill with the ability to attack a small tagger or hit an open shooter if the defense collapses. By letting the Blazers trap without getting the ball to the next level, Maxey and Philly's other guards allowed Portland to chew up valuable time on the shot clock even when the traps didn't force turnovers.

Passing safety works to Maxey's benefit sometimes, but he will need to get bolder to beat different styles of defense.

• Here's hoping the Sixers get a better version of Andre Drummond when Joel Embiid finally returns to the lineup, because he has been absolutely brutal in a high-volume role for most of the last two weeks. This isn't anything new for regular readers of this column, but it's shocking how big of a difference there is between locked-in Drummond and space cadet Drummond.

You could argue Drummond hit a new season-low on a play early in the second quarter, when Tobias Harris threw him a lofted inbounds pass that Drummond was out to lunch on, letting it drift over his head for a turnover while barely moving. It was so bad that I was honestly a little surprised Rivers didn't call a timeout and/or bench Drummond immediately after because it was the culmination of a half's worth of little-to-no effort.

To his credit, Drummond did seem to find himself late in the second half and to start the third quarter, showing active hands to disrupt a few plays on defense. But he's just not offering a whole lot right now.

• Matisse Thybulle made an impact on this game defensively in his first game back, but he made some absolutely mind-numbing plays on offense in this one, bringing the universe to a balance as I suppose it should be. His turnover when the Sixers had a potential fast break midway through the fourth quarter was a killer, and it's a mistake he has made a number of times already this season. Can't happen.

• Typically, the big man is the guy making defensive calls on the back end, and Charles Bassey has already earned strong reviews for his communication so far. But whether he was the guy calling coverages or the rookie was just taking instruction from his coaches, the strategy against Portland's pick-and-rolls was mystifying, playing into the hands of a backcourt that wants to get up a lot of pull-up threes.

Combining for six threes in the first half alone, the Damian Lillard/CJ McCollum combination stepped into a lot of clean looks against Philly, and the looks did look a bit cleaner with Bassey in the game, because his tendency to drop was a constant rather than a play-to-play variation. Scouts noted that Bassey needed a lot of work out of coverages other than drop coming out of college, and perhaps that's why we're seeing him in the style he's comfortable in early on in his career.

Whatever the case is, you can't let Portland's guards just walk into threes. That's not going to cut it even with Lillard's shooting slump continuing into late November.

• Don't really have a lot to say about the nights of Milton and Korkmaz other than to highlight that they were bad and probably shouldn't have outsized roles on a team with real aspirations.

It's a little more concerning that Curry is in an extended funk from deep, but given the track record he has as a shooter and the chemistry he has with Joel Embiid, all signs suggest he will pull out of this.

• The officiating in this game was just absolutely horrific at times, which is something you can say about far too many NBA games these days. I generally like the shift they've made this season to allow guys to play a touch more physically on defense, and support the decision to get rid of the "grifting" fouls wholeheartedly, but you can't let offensive players just get hammered without calling something. A line needs to be drawn somewhere.