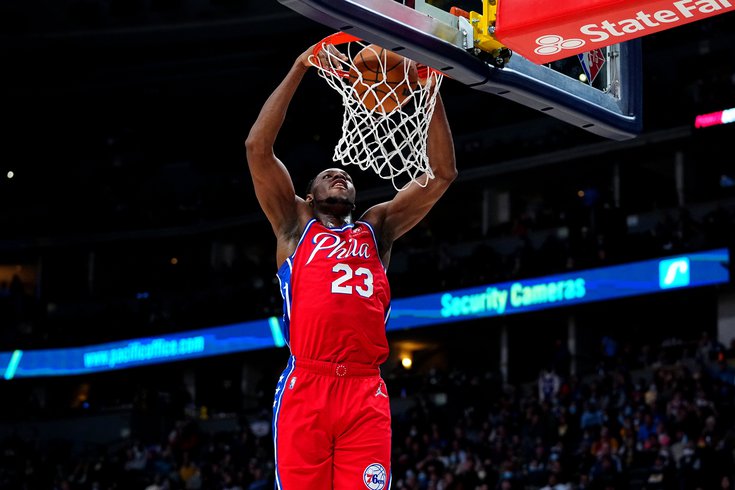 Philadelphia 76ers center Charles Bassey dunks the ball in the fourth quarter against the Denver Nuggets.

Desperate for a win in the middle of a grueling trip out west, the Sixers seemed unlikely to find a victory a mile above sea level in Denver. But the Sixers came up with one of their better team wins of the season on Thursday night, riding starters like Tyrese Maxey down to end-of-bench rookies like Charles Bassey to manufacture a tough, comfortable win on the road.

Here are a few of the things that stood out.

Charles Bassey getting a shot in the rotation at all was an eyebrow-raiser early in Thursday's game. Paul Reed has made an impact on the team since Joel Embiid went out of the lineup, and Bassey has been buried on the bench most of this season aside from some spot minutes he played in Utah on Tuesday. But Doc Rivers told media in Denver after the game that Bassey has been earning strong reviews from assistant coaches, who convinced Rivers to take a look at the rookie center.

"What we just kept noticing is his talk on defense for a rookie. They don't talk, rookies don't say a word usually. He's really talking and seeing things," Rivers said. "You saw it in the shootarounds, we've been going pretty hard in our shootarounds. We make them talk. [Assistants Dwayne Jones and Jason Love] have been in my ear for about a week just saying, 'He's ready, I'm telling you he's ready.' And he was."

That's an understatement. Bassey would end up with a line of 12 points, seven rebounds, three blocked shots, and a whopping +20 on the stat sheet in just over 19 minutes of action, helping to swing the game with his effort off of the bench. Bassey was most immediately impactful as a defender, skying through the air for impact plays at the basket, but he did more than just block shots on that end. Battling Nikola Jokic is as tough a job as any this season, and Bassey ended up preventing the reigning MVP from making a single shot while he was guarding him. Jokic managed to bait him into two fouls for free throws, but Bassey was disciplined otherwise, forcing Jokic to try to shoot over or get around his long arms.

There's nothing fancy about a possession like this, but it's the sort of play young bigs struggle to make, often taking themselves out of the play instead of trusting their size:

As Rivers noted after the game, a performance like this from a guy like Bassey is uplifting for your whole team. When an end-of-bench guy can come out of cold storage and impact the game despite a matchup with an All-NBA opponent, it raises everyone's spirits in a way that is hard to quantify.

"He's a good kid and the guys love him, so he gave us a lot of energy because guys are so happy for him," Rivers said. "That kind of filters through your team when stuff like that happens."

The key for Bassey otherwise was understanding and starring in his role on offense, a three-point attempt late in the game notwithstanding. Bassey was a relentless screen-and-roll presence, avoided dribbling if he ended up with the ball in transition, and cycled passes to the perimeter rather than trying to force up tough shots outside of his wheelhouse, creating an open look or two for teammates. There were even some possessions where it seemed the attention he drew toward the rim on the roll opened up opportunities on the weakside, with Bassey impacting the game even without touching the ball.

Expecting this from him on a regular basis probably isn't wise with an unpolished rookie, but he made an effective case for more PT on Thursday night.

Seeing Tyrese Maxey blow by opposing defenders is quickly becoming one of the best parts of watching this Sixers team. He's there one moment, patiently dribbling the basketball as plays develop around him, then his defender turns their head and he's gone, challenging the big man at the rim before anyone knows what hit them. When Maxey makes a decision, he makes and commits to it with speed, a point of separation between him and a lot of young players.

One of the best examples of that is how he attacks an opposing defense immediately after catching a pass. Maxey does what you usually tell wide receivers not to do, thinking about the run after the catch before he completes the initial catch. But that instinct and soft hands allow him to get a jump on whoever's guarding him, punishing any cheating toward a Sixers teammate. That often means Maxey gets a clear look at the rim by receiving passes right at the start of a cut, and it is also one of his most reliable paths to creating open threes for teammates, with the initial breakdown throwing defenses into chaos.

Watch that play a few times and you'll see it's not as easy as Maxey makes it look. That pass is hauled in with one trailing arm, switched to the left hand for a single dribble, and then fired into the corner directly into Niang's shooting pocket, allowing him to rise up and can a three before Aaron Gordon has any chance to close out on him.

Unless you're an Olympic sprinter, speed is only impactful if it can be tied together with other skills and traits. And Maxey's functional pace is excellent as a result of complementary skills that tie everything together.

Look, we don't need to dwell too much on Andre Drummond's night against Jokic, because that dude is absolutely cooking opposing big men right now. But the effort and discipline issues that have impacted Drummond for years have jumped off of the screen in a bigger role, and they are habits that will matter a great deal when the Sixers are (presumably) in high-leverage moments come playoff time.

Two very different plays here, with Drummond flat-footed on one and out of control on another, both eventually leading to baskets for Jokic at the rim.

You can excuse him for the gamble as he tries to make a play before Jokic can get the ball, but getting caught standing still is just inexcusable. When he's not actively protecting the rim or asked to do something other than drop coverage, Drummond has been mostly bad on defense.

MORE: Rich Paul is creating the Ben Simmons noise he claims is hurting his client

It has not exactly been the best of times for Furkan Korkmaz recently, with the Turkish wing turning in some absolutely ghastly performances from deep in recent weeks. The early season fun of Point Furk aside, Korkmaz's value is back to (mostly) swinging back and forth dependent on his jumper.

At the very least, Korkmaz has been game to compete every night, one of many guys on this team trying to push this team forward with effort if the shots aren't falling. After failing to cash in a layup in transition midway through the second quarter, Korkmaz stuck with the play and ended up getting an extra point for his troubles:

The Sixers remain undermanned, but they are giving it their best in their attempt to hold down the fort sans Embiid. That's all you can really ask for.

In a move reminiscent of a baseball manager rather than an NBA head coach, Nuggets coach Michael Malone stormed the court in the third quarter on Thursday in what looked like an attempt to fire up his team. It wasn't immediately clear what was happening when he first ran onto the floor, and it was even less clear when NBC Sports Philadelphia cut away from the moment for a generic replay of something not involving Malone at the time. Confusion reigned supreme until they were finally able to get an alternate angle of Malone's antics, as the broadcast team tried to sort through the mess with everybody else.

It is just one of many examples this season where the remote nature of the local TV crew impacted a big moment within a game. From what I can tell on the rewatches, things are humming as usual on the home broadcasts, but highlighting and breaking down big moments on the road has been a constant struggle as a result of self-imposed limitations. The audience is suffering, and complaints shall continue.