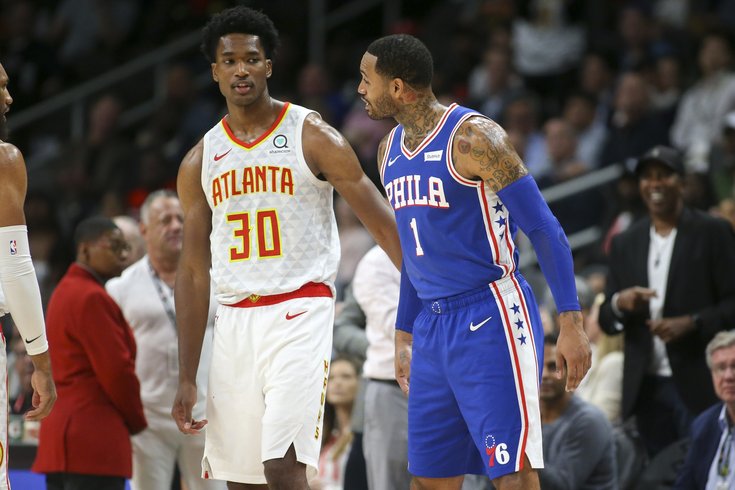 Philadelphia 76ers forward Mike Scott (1) talks to Atlanta Hawks center Damian Jones (30) after being ejected from a game in the second quarter at State Farm Arena.

The Sixers trailed for large stretches of the game on Monday night, but with Joel Embiid back in the lineup and leading the way, they eventually outlasted the Hawks for a 105-103 victory in Atlanta. Philadelphia is the last undefeated team remaining in the Eastern Conference if you can believe it, and they'll get a chance to move to 4-0 on Wednesday night against Minnesota.

Here's what I saw in the win.

• If you weren't aware coming into the game, you're certainly aware now that Trae Young is absolutely burning down the nets this year. He came out looking sensational against the Sixers, powering Atlanta to an early first-half lead.

The only thing stopping him from going supernova was the presence of Matiss Thybulle. Philadelphia's rookie wing came in and took Atlanta's top assignment immediately, and he made it much tougher for Young to initiate the offense. He got up into Young's chest and didn't even allow the ball to get to Young on several possessions, picking off errant Hawks passes and sending Philadelphia running the other way.

Thybulle had three steals and two blocks before halftime, and I'm feeling pretty good about my preseason predictions regarding his steals numbers.

• Welcome back to the lineup, Joel Embiid. After missing Saturday's game with an ankle issue, Embiid made it look easy against the Hawks' frontcourt on the offensive side of the ball.

Monday's performance highlighted the importance of Embiid doing work early in possessions to set up shop. When he doesn't fight to get possession and is forced to improvise with his handle or rely on faking defenders out of their shoes, it's a total mixed bag. But he's an imposing figure, and with a commitment to early offense, he can bury guys under the rim and either force them to pick up fouls or concede easy layups and dunks.

He did just that against Atlanta on Monday, picking up 19 first-half points as they tried to figure out what to do with him. Doing the early work as a big man is not always the most fun thing in the world, but as you can see when he commits to it, it makes a world of difference for Embiid.

He kept growing in stature as the game went on, pounding the Hawks inside deep into the fourth, and the Sixers rightfully kept feeding him right up until the final possession. He delivered at the free-throw line to win the game, and he finished with a monster line: 36 points, 13 rebounds, five assists, and three steals in 33 minutes.

And let me tell you what you should absolutely not do with him — challenge him at the summit when he has a head of steam going, as John Collins found out the hard way on Monday night.

That man has a family, Joel, you didn't have to do him like that.

• Great draw-up by Brett Brown to go hi-lo on the final possession of the game. The Hawks had no answer for Embiid all night, and they made sure to get the franchise player the ball.

• Have to reiterate this again — Shake Milton is the young guy who should be getting minutes if Brett Brown really wants to "grow a bomber" to give them a lift. The shooting touch is there, the attacker's mentality is there when he has lanes to the hoop, and he is just good enough at enough things to hurt you on the offensive end of the floor. Furkan Korkmaz is the alternative option, and he feels like a worse one.

But "The Ugly" is that he took an awkward fall toward the end of the third quarter, and while he walked off under his own power, non-contact knee injuries are always a bit scary. The Sixers ruled him out for the rest of the game with a left knee hyperextension, according to Rich Hofmann of The Athletic, so let's hope that's all that is.

• A win is a win is a win. It would obviously be more comforting if the Sixers were blowing teams out in style to start the year, but they all count the same in the standings.

We'll get into this more later, but I thought they did an excellent job of buckling down on defense after a horrific start. Atlanta's 40-point first could have buried them, but they came together to give themselves a chance in the end.

• I actually thought the Sixers did a good job of mixing up coverages to throw at Trae Young. When he hurt them in standard looks early, they tried blitzing him in the halfcourt and even unleashing a fullcourt trap at times, trying to make sure he saw a variety of looks and couldn't settle into a groove. Being set in their ways has been a problem in the past, and after an offseason of promising to try new things, it's good to see some follow-through. And, it's worth noting, they did slow down the Hawks after Atlanta had a monster first quarter.

The problem for Philadelphia is that they didn't actually execute all that well when they tried to play a more aggressive style vs. Young. Atlanta's players often ended up with open looks on plays where Philly trapped him, and they look like a team that is much more comfortable in their base style than this one at the moment. That's excusable this early in the season, but I don't think anyone should expect this to be a cure-all just yet.

• Woof, what a miserable game for Tobias Harris after his big game in Detroit on Saturday. A handful of his misses were wide-open threes that he never even gave a chance to go in, clanging off the front of the rim and bouncing harmlessly away from the basket. That's something Brown often harps on, by the way — he wants his players to at least "give it a chance" to go in, and would much rather see them miss long.

It's honestly kind of mystifying for a guy who had the shooting pedigree he did when he arrived in Philly. Shooters go through hot and cold stretches for sure, but most of the guys who hit the 40-plus percent tier don't have periods where they are completely off the way Harris gets.

On top of that, and we've discussed this before, there has to be more of an effort from Harris to take over on offense. They didn't pay him $180 million to defer on offense in a lineup featuring Shake Milton, Matisse Thybulle, and Kyle O'Quinn. He doesn't need to turn into a chucker, but he absolutely has to call his own number more.

But hey, the man delivered a huge bucket in the game's final minute with the offense on both ends an absolute mess, so at the very least, it's always good to have a guy who doesn't vomit all over himself when he has to dribble the basketball. ISO basketball has many flaws, but it can help you reduce turnovers, at least.

• I think it's a little easier for fans to get worked up about guys who very obviously shouldn't be on the floor. Furkan Korkmaz, for example, is probably public enemy No. 1 on the Sixers right now, and I can't imagine his time in the rotation is going to last deep into the season.

But look, this is still a team that is built around a talented starting five, and there are very real issues with their top guys. Lloyd Pierce, among other coaches, has shown he can take Ben Simmons out of games for long stretches of time. Al Horford, versatile though he may be, is still a big man, so it's not like he can respond to tough nights in the post by just taking people off of the dribble over and over again.

Shooting is going to be a concern every night of the season for the Sixers, who had another bad night there on Monday. Harris is supposed to be their lifeline in that department, and he finished 1/9 from deep. Perhaps they will regress toward their (presumably) above-average mean as a group because they're getting good looks, but it's something that's hard to ignore in today's NBA.

• One potential concern I have for Philadelphia's defense is their ability to defend big men vertically. While Embiid and Horford have many gifts as defenders/rim protectors, they are not necessarily best equipped to deal with lob threats out of the pick-and-roll.

Admittedly, it's an even harder task when the guard in the pick-and-roll is someone like Young, who forces guards to go over every screen, which then allows him to get downhill a bit easier. The bigs have to walk a tightrope there, especially when someone like Collins is the screener. Something to monitor moving forward.

• I didn't think Josh Richardson had a great night defending Trae Young, but good grief, some of the calls that went against him were outrageous.

This is not an exaggeration — Richardson picked up a foul in the fourth quarter because he had the nerve to get elbowed in the face by Young.

I'm not sure how you guard a guy when they're getting these sort of calls.

• If you want to argue that the foul on Mike Scott late in the first half was a flagrant one foul, I think that's perfectly reasonable. He didn't make much of a play on the ball, so it's not strictly "a basketball play" as defined by the rules. But a flagrant two with an ejection for this? Absolutely ridiculous.

Softest ejection of all time? Be better @NBA pic.twitter.com/ZSg86WoceM

For me, this is a textbook example of what a hard foul should look like. Nothing overzealous, no intent to injure, just making sure the player in transition doesn't get a free look at the rim. I have to imagine this one is going to get looked at by the league, and I would be mildly stunned if it didn't get reduced later on.

But in the short-term, Scott's ejection was obviously a big deal for Philly. He's one of their few reliable bench pieces from deep, and they had to go without him for the entire second half. Not ideal.

• I honestly hated the technical foul on Embiid more than the flagrant two. Player safety is one thing. Not allowing players to talk shit after putting someone in a goddamn body bag is anti-fun and anti-sports. You posterize someone like that, they should have to shine your shoes after the game.