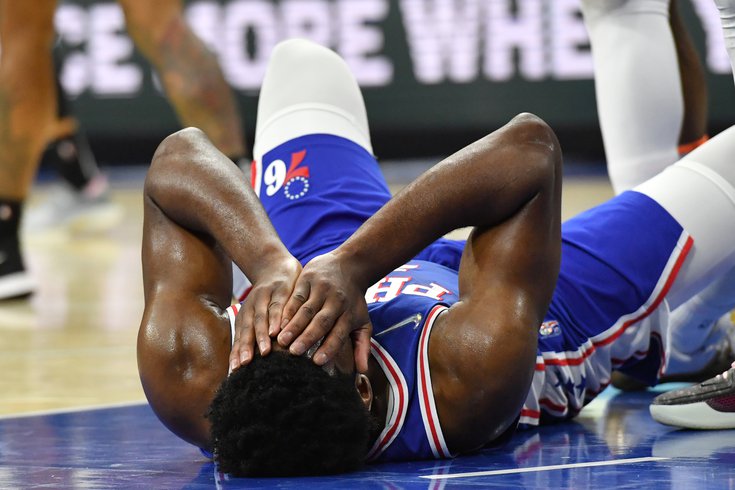 Joel Embiid reacts to a foul in the Sixers' blowout loss to the Nets.

The Sixers got a playoff-caliber crowd and decided to meet it with a preseason-level performance, getting absolutely shellacked by the Nets in a 129-100 loss. With Ben Simmons looking on from the bench, his new teammates beat Philly up in every way possible.

• I struggle to call this an outright good game for Joel Embiid. Some of his bad habits from early in his career bubbled to the surface, with Embiid playing with tunnel vision on offense and getting a little too interested in playing the foul game. But he was basically the only guy on the team that seemed at all ready for this moment and this game, and he was a one-man machine at the free-throw line, marching to the line 19 times in the first half alone.

Well, that was the end of his journey to the free-throw line for the night, as it turned out. The line is better than the performance probably was, but I still believe the Nets are going to have a difficult time dealing with him if they end up in a playoff series together. There will just be a lot more fear of this Nets team than there was even 24 hours ago.

• We don't have to bury the lede here — James Harden was absolutely horrendous in this game. All the issues he has been accused of having when it matters in the playoffs came roaring to the forefront in a game with all eyes on it, and it was probably the single biggest reason the Sixers found themselves down 20 points early in this game. Brooklyn's perimeter stars played at an A1 level, and Harden was a mess, turning the ball over and getting his shot packed whenever he tried to get into the painted area.

There were far too many attempts from Harden to sell contact and draw fouls when he could have simply played basketball. He didn't look particularly good or shoot well even when he tried to reach deep into the stepback bag, but that was frankly a secondary issue. Throughout this game, Harden looked without a hope or a plan after spending most of his time here to date completely controlling games.

You look at Harden's passing a lot differently when the other team has completely shut him down as a scorer. There were moments in Thursday's game where it felt like Harden was so in his head and stuck in the mud that he simply wanted to get rid of the ball, uninterested in attacking the teeth of Brooklyn's defense. And this isn't even a good defense! Far from it, in fact. It's almost hard to describe just how bad and detrimental to the cause Harden was in this game.

I'm not saying you need to use this game as evidence for anything more than a bad game for Harden, but there's a reason a lot of people have asked questions about him as a go-to guy when things really get tough. He has some downright baffling clunkers on his resume, some of which have even been lost in history after other teammates and role players managed to bail him out. That doesn't mean he's going to fail here in Philly, but he does have to rewrite the story of his career to some degree. This was a small opportunity to perform with pressure and attention on him, and boy did he fail the test.

A lot of people (rightfully) spent the lead-up to this game discussing the anger and disrespect that would be pointed in Ben Simmons' direction. Locally, we probably did not give enough time to the opposite angle, the consideration that James Harden's former teammates would rev it up to try to make him look bad for leaving them. Kevin Durant carries slights around with him to the point of running burner accounts to clap back at people disparaging him, and you had to know he was going to come into this game with a point to prove.

• The most concerning thing coming out of this game for Philadelphia is something we have focused on even as they've gotten off to a good start with Harden. This team does not have a lot of defensive options on the perimeter, and there's a non-zero chance they're going to be drawing dead when they play teams with multiple threats on the perimeter in the playoffs.

There's an idea among some people that Tyrese Maxey trying hard seems to mean that he's a better defender than he actually is in reality. He has his moments as a helper, and he has been more of a defensive playmaker since Harden joined the lineup. But the Nets put young Maxey in a blender on Thursday night by hunting him repeatedly in different actions and forcing him to try to rise to the occasion. To say he didn't meet the moment is an understatement. Maxey died on screens, bit hard on just about every pump fake he saw, and even got bullied in the post a little bit by Kyrie Irving, admittedly a nightmare matchup for anybody to guard.

Putting it all on Maxey would be a disservice to the kid, of course, because basically everybody who was not named Joel Embiid had an absolute disaster class on that end. James Harden botched switches or helped off of players he shouldn't have. Tobias Harris somehow managed to lose Kevin Durant (of all people to lose!) when he was in off-ball configurations, allowing Durant to step into some impossibly easy shots. Georges Niang, bless his heart, tries hard on defense but doesn't have the foot speed to deal with a lot of like-for-like matchups, let alone ones where he has to chase a smaller player around in a switch.

They simply do not have defensive-minded players on this roster outside of Embiid and Thybulle, unless you count Danny Green, whose legs have looked slower this season as he deals with soft-tissue injuries and a battle with Father Time. Brooklyn had a far above-average performance shooting the basketball, which shouldn't go unnoted, but the Sixers didn't exactly offer a lot of resistance and haven't since they ended up in this configuration of the team. I am not sure where the defensive spine comes from when it's time for them to stop teams like the Nets in the playoffs, even if you could rightfully say there aren't many teams like these Nets.

The Sixers are a route one team with one realistic path to glory: elite offense. When that isn't there, they are in a lot of trouble. And it should concern you if you are of the mind that they can and should be gunning for a title this season. Reinforcements are not coming.

• Needing Thybulle to be an impactful defender is a pretty huge problem for this team, because he is the guy teams are going to choose to simply ignore when they're locked in a playoff series. And we saw a familiar problem play out on Thursday night, bringing back memories of Philly's second-round loss to the Hawks last year.

Remember when Trae Young got to just hang out in the corner and do nothing on defense for most of seven games? Seth Curry was able to pull that off for almost the entirety of Thursday's game, with Thybulle spending a lot of time spacing in the corner and accomplishing absolutely nothing by doing so.  So Brooklyn's worst defender in their starting lineup, and probably their worst defender on the roster, got to show off all of his offensive strengths without being punished for any of his weaknesses.

It took until the Sixers were down nearly 30 points for Doc Rivers to try to put a gallery of shooters around Embiid, and by that point, the guys on the floor were checked out of the game in a major way, going through the motions and firing half-hearted passes around the floor. Or more accurately, they tried to throw half-hearted passes around the floor, and mostly ended up throwing them to Nets players who were happy to rip them off.

(Here's the worst part — Thybulle wasn't even useful on defense in this game. There were a bunch of defensive possessions where Kyrie Irving coasted past him with very little resistance. There were a couple of nice plays, sure, but by and large he was out of his depth, just slightly less crappy than the rest of the group. Not exactly a team of high achievers on that end.)

• This team was simply not ready for the game. I asked Doc Rivers at practice this week if there was any danger of the circumstances making them too amped up for this game, and his retort was that they had their focus on the basketball portion of the evening. If that was true, they didn't focus very well. If it wasn't true, which I suspect was the case, they were the ones who ended up wilting in the spotlight. Pretty brutal.

• DeAndre Jordan absolutely stinks, man. If you guys want to convince yourselves that his line was representative of his ability to make an impact on a game in 2022, be my guest, but don't expect me to come around anytime soon.

• Ben Simmons coming out pregame and not taking a single shot, save for a rim-grazing dunk that earned huge cheers from the crowd, is just an incredible commitment to the bit. I'm not going to say you have to respect it, obviously, but going out on the floor and doing nothing except for passing to Patty Mills is hilarious.

• This game is a great example of why, despite their team being a complete disaster for most of this season, nobody will want to play the Brooklyn Nets in a first-round series. It doesn't matter that they're slapping this together at the end of the season, it doesn't matter that they have roster construction concerns, it matters that they have Kevin Durant, who can go god mode on basically anybody and anything you put in front of him.

Unfortunately for the Sixers, they are especially short on options to deal with Durant. With due respect to Tobias Harris, who has actually done a decent job guarding top perimeter options in a limited sample size recently, he has less than zero chance to stop Durant.

• Everyone even adjacent to the Sixers was terrible in this game. After the Sixers broke a scoring drought with a Matisse Thybulle dunk, PA man Matt Cord started calling him Tyrese Maxey before catching himself midway through. When it rains, it pours.