Instant observations: Sixers get blown out by Spurs in second half of back-to-back 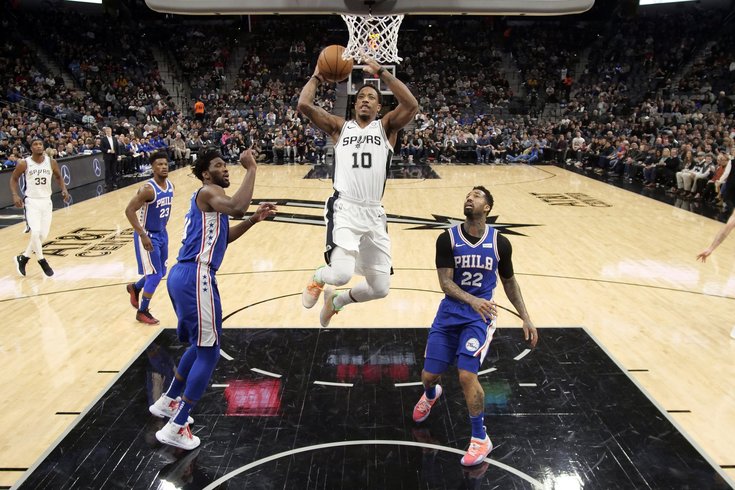 San Antonio Spurs shooting guard DeMar DeRozan (10) goes in for a dunk past Philadelphia 76ers power forward Mike Muscala (31) and Wilson Chandler (22) during the first half at AT&T Center.

They came, they saw, they sucked big time. The Sixers got absolutely obliterated by the San Antonio Spurs on Monday night, falling 123-96 in the second half of a back-to-back.

There are nights when you just don't have it, and this was like if you combined one of those games with the bench of a mid-tier team in the Adriatic League. A terrible game on almost every front, as you can read about below.

• Joel Embiid has been an all-world defender from basically the moment he hit an NBA floor. But his shot-blocking instincts sometimes take him away from where he needs to be, clearing space for a pass or a layup at the rim.

In recent weeks, there have been signs of Embiid stifling his desire to snuff out all comers, with Embiid doing an excellent job of keeping himself planted to the ground when opponents try to get him to bite on pump fakes. It's subtle, but it's an important line for him to walk.

He has long been one of the NBA's best players at using his length to deter drives toward the rim. Doing so without risking fouls or taking himself out of position is ideal, so long as he can find a way to do it effectively.

• Good job by Wilson Chandler on Monday for looking like one of the only Sixers players with a pulse. You know times are dire when Chandler is one of the major positives from a game.

• The Legend of Shake Milton continues to grow.

• There are positives and negatives to Philadelphia's switch-heavy scheme. Having DeMar DeRozan guarded by T.J. McConnell on a regular basis because of that strategy is firmly in the negative column.

Speaking of misguided defensive decisions, I understand the Sixers don't want to send help on big men and would prefer to stay home on shooters. However, after the fifth straight possession of LaMarcus Aldridge abusing Mike Muscala in the post, maybe send a little help defense and make someone else beat you.

Fatigue was always going to be a factor on a road back-to-back, so that's where you really need to make up the difference with sound decisionmaking and smart adjustments. The Sixers did none of that, and they couldn't hit a damn shot on top of that. Not a recipe for success.

• The biggest reason Ben Simmons needs to be able to shoot is so he can simply get the eff out of the way when the Sixers are trying to run plays for Embiid. Philadelphia tried several times to run sets through Embiid in the first half on Monday, even some rare pick-and-rolls with Embiid and Butler, and Simmons' propensity to sit in the "dunker's spot" completely junked things up.

It makes life needlessly difficult for Embiid when teams can clog the paint without being punished for it. The usual repercussion for sending a hard double is an open shooter on any other team. When teams send hard doubles at Embiid, they're often not moving more than a few feet to swipe at the ball, and it's no surprise that turnovers can pile up in that setting.

Embiid and Simmons each did some great work individually, but it's difficult to point to stretches where they're benefitting from one another on the offensive end of the floor. Examples come in fits and starts, but for as talented as they are, they don't come often enough.

• Not sure if Embiid was playing with a different basketball than everybody else, but he was fumbling the ball all over the place. It's one thing when he's being doubled, but he was coughing up the ball under minimal duress and playing a big part in clogging up the offense.

Hard to get mad at a guy who routinely carries the team, but he's better than this by a longshot.

• That was the worst Jimmy Butler has looked in a Sixers uniform. Not sure that needs any more detail — he flat out sucked on offense. Not a surprise in a back-to-back as he works his way back from a soft-tissue issue.

• I admire the fighter's spirit, but I think Brett Brown has to know when to throw the white flag for this game. Bringing back a bunch of tired starters to begin the fourth quarter was a waste of everyone's time and energy, particularly when this team is thin to the point that those guys have to win you games every night.

It sure seems like the Sixers could have used another valuable rotation player from the Bryan Colangelo era. And by another one, I mean a single one, since Simmons is basically the only player of consequence they acquired under his direction.

• Pretty much all of T.J. McConnell's first-half minutes fall under this category. He was brutal on both ends of the floor, with the Spurs hunting him on switches and content to basically leave him alone on the offensive end.

The limitations of McConnell are crystal clear when he is asked to play a consistent role. His effort can be infectious, but that has a shelf life. Unfortunately, the Sixers don't exactly have an alternative right now. Not great.

But other than that!

• Not sure who decided it was a good idea to have a road back-to-back that took the Sixers from Cleveland to San Antonio, but boy was that brutal to watch.

It still shouldn't have been that ugly against one of the worst Spurs teams in recent memory. It is a reflection of the team's terrible depth when they get killed in this sort of game. There is no recourse for Philly if their stars are sub-par. They shouldn't have to have A+ games every night for Philadelphia to win.