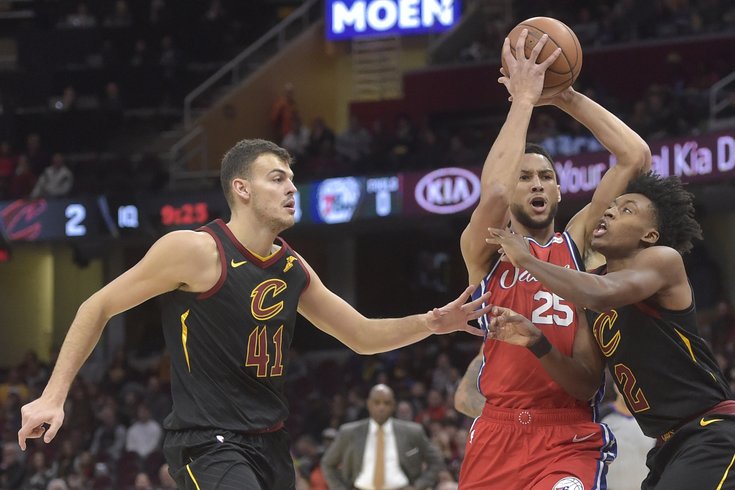 Ben Simmons has to be one of the least fun players to discuss out of everyone in the NBA. The second-year Sixers star has camps on both ends of the spectrum — those who will yell at him to, "shoot a three, coward," and those who point to his triple-doubles and all-around skills and compare him to all-time greats.

It's not all that rewarding to be in the middle area of that debate. But what if I told you that we can celebrate the things Simmons is capable of right now, while still being concerned about the jumper that needs to come down the road? Sunday's win over Cleveland felt like the perfect representation of where Simmons is vs. where he needs to be.

The numbers, as they often are, were incredible for Simmons against Cleveland. With 22 points, 11 rebounds, and 14 assists with zero turnovers, Simmons became the youngest player in NBA history to put up a 20-10-10 line with zero turnovers, beating out the likes of LeBron James, Magic Johnson, and any other all-around talent you can think of.

The more important thing for Simmons, and thus the Sixers, was the approach to the game. The Sixers were struggling to deal with the Cavs yet again on Sunday after suffering their first home loss of the year to Cleveland weeks prior. A game that was billed as a bit of a revenge game by Joel Embiid and Co. was not going according to the script.

It was Simmons who made sure the Sixers got back on track. He did a little bit of everything, making hit-ahead passes in transition, cutting off the ball in the halfcourt, operating out of the post, even bodying some smaller players who had the misfortune of picking him up in the paint.

Put simply, Simmons played like the athletic marvel that he is. Cleveland had no one on the court who could stop him from getting to his spots, and the only thing holding him back from a bigger night was his own failure to convert shots around the basket. Simmons missed two or three bunnies around the rim, each a little more perplexing than the last.

Those plays are perhaps a window into Simmons' brain. He misses shots from time to time where he's simply the victim of his own hesitation. Instead of going up strong and inviting whatever comes with it, you can see the gears churning in Simmons' head as if he has to think about what to do before he can execute it. It leads to some downright comical misses for a guy his size.

Maybe that's a reflection of the biggest gap Simmons needs to bridge. Not every team will play him the same way, so you can't expect him to dominate in the same way on a nightly basis. But for a player who always talks about wanting to be peers with the game's greats, consistency in mentality remains one of his biggest hurdles.

There are much worse problems to have, in fairness. Being able to turn it on and dominate at all is the most important piece of the puzzle here. But for the Sixers to take the next step as a team, it's Simmons who has to make the biggest leap forward. He has to take ownership of the minutes when Embiid sits, as Jimmy Butler has already mastered the art of taking over games when the moments present themselves.

This is where Simmons can prove that the rocky fit with Embiid is an issue to be tabled for later. With Mike Muscala playing backup center and the Sixers surrounding him with shooting, the Sixers are giving him the keys to that second unit. And as we saw during the team's hot streak to end last season, Simmons can make that group look really, really good, even if it's against subpar competition.

I'm not sure how (or if) you coax this sort of play out of Simmons more often, but the ceiling of the team is different when they can get him going. They can't play Cleveland every night, but they should demand excellence from Simmons more than they have to date.

A lower-stress night for Joel Embiid

The biggest beneficiary of Simmons' change in approach may have been Embiid, who put up another great stat line (24 points, nine rebounds on 10/16 shooting) without having to do half the work he normally does to get there.

On an average night, Embiid spends far too much time trying to dismantle the opponent through the post. Whether he can do it is a separate idea from whether he should do it. Backing guys down and winning against double teams for 48 minutes is not sustainable, and we've seen Embiid wear down in second halves because of the reliance on this style of offense.

Against Cleveland, we saw what it can look like for Embiid when he doesn't have to work so hard for his points. Frankly, it should be a point of emphasis moving forward.

This is pretty simple logic, but the less a seven-footer has to dribble the ball, the better off you'll be as a team. There are too many things that can go wrong when you're asking Embiid to create for himself all the time. The problem has been two-fold: the Sixers don't have enough players who put pressure on defenses otherwise, but Embiid also has to do the work to establish early position, and that can be easier said than done.

Both sides of the equation held up their end of the bargain on Sunday. Embiid had a number of buckets around the rim where the bulk of his work was just getting into position, with one or less dribbles setting up dunks and layups.

We obviously still got the usual assortment of rip-through moves, Euro steps, and other Embiid staples, but with Butler in the mix, the Sixers should be looking to get this version of Embiid more often.

An understated return for Jimmy Butler

In his first game back, Butler was hardly involved at all in the early stages of Sunday's game. That was probably good for health reasons, but it's even better for team-building purposes.

The All-Star forward had a sizable impact on Sunday's game without having to dominate the ball. That was one of the primary concerns many had about bringing Butler to Philadelphia aside from the off-court/chemistry stuff, and it looks unfounded so far.

One reason I was bullish on the fit in Philadelphia was Butler's ability to make catch-and-shoot threes. The problem has never been his ability there, but whether he was taking enough of them and how open he was on the attempts. Butler delivered on Sunday, knocking down 3/4 attempts from deep en route to 19 points in 25 minutes. Not bad for his first night back.

With attention shaded toward Embiid and Simmons, Butler is getting a lot of open shot attempts. He's shooting 50 percent on catch-and-shoot threes since joining the Sixers, per the NBA's stats database, and over 20 percent of his shot attempts are coming on shots the league's tracking designates as "open" or "wide open" shots. He'll probably regress over time, but Butler is shooting 47.2 percent on threes in either of those two categories, a staggering number for players with his overall scoring ability.

You certainly don't want to take the ball out of Butler's hands altogether, but so far he has proven capable of jumping in and out of roles as the team demands it. For a group with lots of inflexible role players, Butler's shapeshifting is key.

(And by the way, shout out to Landry Shamet for his shooting performance against the Cavs. I don't have a whole lot to add other than, "Boy, that kid can shoot.")