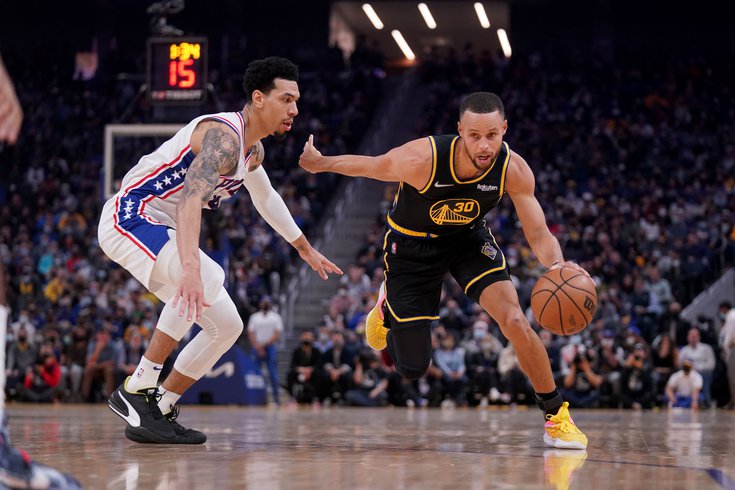 The Sixers just don't have enough firepower to keep up with teams like Golden State without their stars on the floor.

The Sixers surged to an 18-point lead in the first half against the Warriors, but Golden State came roaring back to send Philly home with a 116-96 loss to end their long road trip. It's another frustrating loss, but it does mean the Sixers are coming home.

• The level of progress Tyrese Maxey has made over the last year seems downright impossible at times. A huge early performance against the Denver Nuggets aside, the start of Maxey's rookie year was filled with ups and downs, the biggest question each night being whether he would be in the rotation at all. Now, he's a 21-year-old who looks ready for prime time, and he continued to cook on Thanksgiving Eve.

Very few players in the league appear to have the foot speed to stay with Maxey when he hits the turbo button out of the backcourt. But the speed has always been there, even when Maxey was settling for runners and floaters almost exclusively. As a national audience saw on Wednesday night, he has started hunting and scoring through contact a lot more once he gets past the first level, as he did on this beautiful move against Steph Curry:

Tyrese Maxey falling away... plus the foul!@sixers in control on ESPN pic.twitter.com/Lz8H9N0s1u

His improvement as a contact-seeker will allow him to dictate the terms of a game more over time as he hones that skill. Draymond Green, Golden State's defensive ace, picked up his third foul midway through the second quarter, and Steve Kerr risked further damage by leaving him in. Maxey immediately went at Green and forced him to pick up his fourth foul, a huge get for Maxey and the Sixers before the halftime buzzer sounded.

(Getting to the line as much as he has over the last few games almost certainly isn't sustainable. But as long as he can get there with some regularity, it'll make a huge difference for this group.)

It was tougher sledding for Maxey in the second half, but drawing fouls helped him sustain his offense somewhat even though shots weren't dropping, and figuring out ways to get by when his percentages inevitably fall is the next step in his evolution.

• This game did not go according to the script everyone expected early, with the Sixers getting out to a double-digit lead in the first quarter in spite of the noteworthy absences in their lineup. And the guy doing most of the damage was the other Curry brother, with Seth returning to the floor and immediately producing after a one-game layoff.

Over the years, the Sixers have had far too many games (and series) go awry because the other team was capable of hunting mismatches and targeting whoever the weakest defender on the floor was for Philadelphia. This time around, Curry was one of a few guys going at Nemanja Bjelica, punishing the Warriors for trying to play him in this matchup.

But even when he didn't have that favorable matchup, Curry was on a roll, using nifty footwork and shoulder shimmies to create a scoring window. He made a couple of beautiful arcing shots off of the glass in the first half, and when combined with his midrange barrage that just doesn't quit, he looked sensational early.

If only he could find his touch from deep.

• Was Matisse Thybulle made to look silly a few times on Wednesday night? Of course, but that's the cost of doing business when you're the primary defender on Steph Curry. The important thing is that Thybulle left a sizable impact on this game, flying around the floor and getting his mitts on passes and shots that few players in the league could make plays on from the same position.

Philadelphia's early success is owed at least in part to Thybulle, who almost singlehandedly turned this game into a chaotic mess as the Warriors struggled to find their footing. The Warriors' Curry had a good game, but not a great game, and Thybulle deserves plenty of credit for the way he hounded him throughout this one.

• Some Sixers fans have been convinced that Danny Green's absence has been a good thing, and while he hasn't been at his best this season, that idea is lunacy. Having another guy in the rotation who can make shots and defend at an adequate level is always going to help your team, and Green came out firing in his first game back.

He wasn't as loud on the defensive end as Matisse Thybulle (very few players are), but Green was all over their strong start to the game on that end, flying around in rotations like a maniac and beating Warriors players to spots to clutter up possessions. As always, he also had active hands when the Warriors had the ball, picking up a few deflections early.

It also helps when the guy makes shots, and Green was on in this one, going 4/4 from the field in the first half with a pair of threes to his credit, helping the Sixers create early separation from the team with the league's best record.

(Rivers was also wise to bring him off of the bench and keep him in a diminished role after playing him far too many minutes in Green's last return from injury. They don't need a hamstring problem lingering all season for one of their vets. Perhaps they would have kept it closer in the end if he could play more, but discretion is key.)

• I like Isaiah Joe getting a chance to play in this sort of game, and he made enough plays on offense to justify the decision to boot. The only way he's going to inch closer to playoff-ready player is if you thrown him into hostile environments against good teams, and he looked like he belonged in this one.

• Saying the wheels came off for the Sixers in this one is probably a bit unfair to them, and a bit unfair to the Warriors for that matter. The Sixers were never going to make this a 20+ point blowout against the league's current best team, though they definitely lost their composure and gifted the Warriors a chance to get back into this one that Golden State hardly needed in the form they're in.

The most indefensible part of the comeback was Philadelphia's poor transition defense. The Warriors can be an absolutely devastating team on the break with the passers, athletes, and shooters they have to run the floor with, and the least you can do is meet their level from an effort and energy perspective. But the Sixers struggled to match them step-for-step, getting beat down the floor and punished for losing that battle.

Ugly turnovers did not help their cause, and if you name a Sixers rotation player, there's a good chance they had a bad giveaway. Matisse Thybulle had several braindead passes, Andre Drummond's Magic Johnson impression went poorly, and even Maxey joined the giveaway gang against Golden State, a rare occurrence for a guy who sometimes plays a little too carefully.

Once it became a seesaw game in the third quarter, you figured it was only a matter of time until the Warriors found the closing kick to put this one out of reach. The Sixers deserve credit for battling hard down so many guys at the end of an exhausting road trip, but wins are still the point of playing the games.

• Andre Drummond honestly looks like he's trying to put a medicine ball in the basket when he does anything other than dunk the ball. It doesn't matter if he's posting up against a smaller player, rolling toward the hoop, or trying to create off of his own dribble, every single layup attempt is a freaking adventure. And they're not even fun adventures where you believe he might make one every so often.

His lapses in concentration on defense are also a lot more noticeable against a team like the Warriors, who move the ball with pace and demand a lot out of every guy on the floor. When he's in situations where he needs to fly out for a closeout or make a smart rotation before a play can develop Drummond is nearly always several steps slow, and the Warriors were able to punish those moments of hesitation repeatedly.

Early in the fourth quarter, Drummond fell asleep on a baseline out-of-bounds play, then fouled Juan Toscano-Anderson as he made the ensuing layup and converted a three-point play, a huge momentum swing late in the clock. Minutes later, JTA absolutely smoked Drummond in space before Drummond realized what was happening.

Looking down the road, these are the exact sort of mistakes that absolutely kill you when they happen in the playoffs. Not a guy you can probably trust in high-leverage moments. And given that Drummond can't space the floor and has the aforementioned finishing issues, there's a decent chance he's closer to unplayable than impactful in the games that really count.

• There is no shame in the fact that Georges Niang is not a starter-level player. When he was in a proper bench role to open the year and playing off of Joel Embiid in some mixed-unit lineups, he looked the part of a valuable role player. The shine has worn off some recently. and it's mostly because he should not have to play this many minutes and get this many reps every night.

Thrown into the starting lineup to replace Tobias Harris against the Warriors, Niang was in a position where he had to self-create far too often, leading to a number of possessions where he was hoisting shots he had no business taking from midrange. Once he's back in the role he's supposed to be in, I'm not worried about him getting back in more of a groove.

The things you can't afford are the stupid fouls Niang took on Wednesday night. Whether or not you think he should have been called for a flagrant foul in the third quarter, Niang played physically past the point of it being legal, and it cost him and his team.

• To get the matchup they wanted with Matisse Thybulle on Steph Curry, the Sixers had to live with the downside of Tyrese Maxey spending a lot of time on Andrew Wiggins. With Wiggins' tendency to drift in and out of games, that wasn't a crazy bet for the Sixers to make, but the Warriors began to exploit it early in the second half, getting the ball to Wiggins in spots where he could use his size advantage to turn the screws on Maxey.

It does make you wonder what the Sixers will do if they're relying on a Maxey-Curry backcourt when it matters. A problem for another day.

• The Sixers really need Furkan Korkmaz to get going from deep again.

• Officials who don't call fouls until after shots rim out infuriate me. Either it's a foul you think is worth calling or it's not, the shot should not factor into the equation.

• Here's hoping Maxey does not have any after-effects from the collision he had in the third quarter. Maxey is a tough kid and continued to play, but he had to be a bit woozy after getting hammered like that.