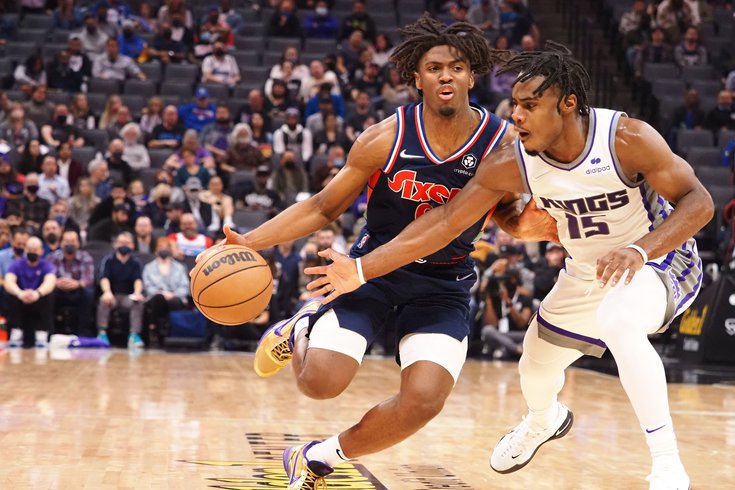 The Sixers earned a big gut-check win on the road despite missing all of last year's starting lineup, stealing a 102-94 victory over the Kings as their road trip nears its end.

• This was one of the better two-way games we have seen Matisse Thybulle play in a while, partially because he has not been in the lineup at all and partially because offense is still a bit of a minefield for him. But he got himself involved as a cutter for a couple of early baskets, and he did even better to turn his defensive mastery into easy baskets in transition.

Even by his standards, this was an electrifying night on defense. Thybulle appeared to get a hand on any ball that came within five feet of him, deflecting passes and knocking away lazy dribbling on seemingly every other possession. On a couple of possessions, Thybulle was able to break up plays before they ever got rolling in the first place, soloing for some emphatic dunks that drew oohs and aahs from the Sacramento crowd.

Transition baskets aren't something we normally celebrate a whole lot around here, but Thybulle can be an adventure even in that setting, and his Euro step finish with around five minutes to go was a huge bucket at a critical juncture, a spot where you normally can't trust him to do much more than defend. He continued to buckle in on defense the deeper the game got, allowing the Sixers to shut off the Kings when it counted.

When Thybulle can avoid the cheap fouls on defense, he is absolutely mesmerizing and can take over a game by turning it into a chaotic mess. Thybulle is still getting his legs under him, but this was a good reminder of who he is and what he offers.

• I've given Andre Drummond a lot of grief recently, so it's only fair that he gets his fair share of kudos for an excellent effort in Sacramento on Monday night. It all starts with his approach to the game — Drummond came out ready to compete against the Kings, and that makes all the difference in the world for him. He was active on the offensive glass, a shot-blocking machine on the other end, and engaged with his teammates throughout possessions, offering the best version of himself in a game where they really needed him.

Down all of last year's starting lineup, Drummond had to wear a ton of hats in Monday's win. But he made his biggest impact in the area where he has made his money throughout the years — rebounding. The Kings did not have a prayer when trying to keep him off of the glass late in this one, with Drummond creating a ton of extra possessions for Philly in the second half. By the time it was all said and done, he had 23 total rebounds and seven of those on the offensive end, a box score number that matched the physical dominance he showed when it mattered.

Drummond's passing was also a big asset in this one, even if Sixers teammates didn't always cash in on the cross-court dishes he was making all night (looking at you, Furkan Korkmaz). Whether he was dealing from the baseline or near the top of the arc while waiting for a dribble handoff, Drummond caught the Kings off guard by looking for guys over the top of the defense, creating open looks that they never would have gotten otherwise.

They don't get this one without him.

• Tyrese Maxey nearly got himself banished to the bench in this one thanks to two early fouls in Sacramento, an understandable problem when chasing around a speedster like De'Aaron Fox. It's a good thing for the Sixers that he righted the ship from there, because his indispensable set of skills helped them get rolling in the first half.

No matter how often you see him do it, it still hasn't gotten old watching Maxey hit new opponents with a burst of speed to get to the rim. This is good stuff:

Lol, this kid's something else. pic.twitter.com/IbbJssFUa4

The Sixers were having a lot of trouble getting toward the bucket on Monday night — not too surprising given the personnel — and Maxey made it a one-man mission to change the dynamic, putting pressure on the basket even when his layup and runner attempts didn't fall. As he began to get there with regularity, the Kings started to cheat off of shooters in the corners to help on Maxey's drives, and that opened up passing lanes for the second-year guard. Maxey had a nice drive-and-kick to Isaiah Joe in the first half that should hopefully become an example of a regular play for him to make.

On the negative side of things, Maxey is going to have to make sure he keeps his confidence from deep even when he's in the middle of a tough game from deep. His aggression early in the game was a welcome sight, but there were a couple of possessions in the second half where shot opportunities came his way and died as a result of hesitation. I would rather see him go 0/10 from three if it means avoiding recycled possessions and late-clock offense.

Still, Maxey didn't let his struggles from deep (or even some struggles elsewhere) stop him from attacking late, and the pressure he put on the cup loosened things up for everybody else.

• Shake Milton is a bit of a Dr. Jekyll/Mr. Hyde player, the sort of guy who can either help shoot you to a victory or derail the offense to a point that it is unrecognizable. On a night where they had few players available to suit up, the Sixers were fortunate to have Milton on one of his good nights, confident from three and feeling himself from the in-between areas to boot.

Milton's ambidextrousness has been a big asset for the bench guard this season, with Milton pouring in a lot of points using sweeping lefty hooks and layups around the basket, avoiding shot-blockers who likely think he wants to get to his right shooting hand. Moves like those help him build confidence as a scorer, and Milton was definitely feeling himself in this one, canning stepback threes with ease to help pick up an offense that sputtered at times in the first half.

Sprinkle in some tough, disciplined defense against De'Aaron Fox with the game hanging in the balance, and he had himself a good night.

• The Furkan Korkmaz experience has been absolutely miserable lately, and the shame of it is that he's one of the few guys who is consistently getting open-ish looks on this undermanned version of the Sixers. His ability to brush defenders off of him using screens is good, he's getting to decent spots in pick-and-rolls, but he just can't buy buckets, which is, unfortunately, the name of the game.

(By the way, Korkmaz is a surprisingly mediocre free-throw shooter, given that his NBA skill is supposed to be shooting.)

Speaking of guys whose shots weren't falling, Korkmaz was joined in the stinker category by Georges Niang, who seemed to get open look after open look in the corner and still failed to convert most of them. Niang did try to break up the monotony of the misses by attacking the basket and trying to score by other means, but he had just as little success on those attempts.

The problem with both of these guys is that when their shots aren't dropping, they're also liable to hurt you on the other end as well. Both guys compete hard and Niang is probably a better team defender, but both guys get regularly eaten up by screens and struggle to track quicker guys on-ball when they're in space.

• It wasn't all bad for Charles Bassey on Monday night, as the rookie big continued to show off plus passing skills and instincts early in his NBA career, but this was a good example of how tough it is to rely on young bigs as contributors. Bassey was punished repeatedly for the stuff almost every big has to learn not to do over time — picking up dumb fouls by jumping at shot fakes, taking themselves out of plays by pursuing a block they can't get to, and struggling to guard a small in isolation in plays where they get switched.

Up against vet big Tristan Thompson for most of his minutes in the second half, Bassey just absolutely got his ass kicked. Thompson, who is only playing about 13 minutes a game this year, overwhelmed the rookie big with his activity around the basket, taking advantage of every misstep and misread Bassey made in the second half. That was most of the difference in this game, and it should be a familiar feeling for Sixers fans that a backup center undid a lot of the good work they did otherwise.

The good news is that these are all mostly correctable problems. And Bassey has offered more good than bad lately, that just wasn't the case against Sacramento.

• Paul Reed has yet to make a three in an NBA game, and until that changes or he looks like he's even going to come close on one, it's going to be very difficult to play him as a forward instead of a center. You can probably get away with it (and the Sixers did) if you stick him next to a guy like Embiid, but with rim-bound centers like Drummond and Bassey, it's just asking for trouble.

• The Kings should be absolutely ashamed of themselves losing this one. With a new coach boost and the Sixers undermanned to a comical degree, this should have been a walkover game. The idea that anyone on their roster could be untouchable in trade talks is downright comical.

• I understand (even if I disagree) with a coach's instinct to sub out a player who picks up two early fouls, but Doc Rivers taking Tyrese Maxey out of the game less than five minutes into this one felt like a self-inflicted wound. Maxey does not pick up many fouls even as he has transitioned to a higher-volume role, and while he would have had to play more passive defense, they're not exactly relying on him to be a stopper as it is.

At this stage of his career, there's even more incentive to take the risk and allow him to get some experience playing with foul trouble. Develop the kid, including in situations like these.