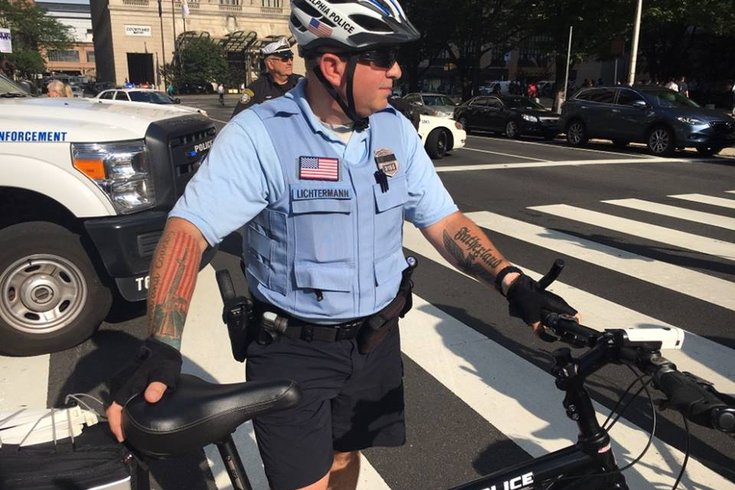 An Internal Affairs investigation has found a Philadelphia officer did not violate department policy by having an apparent Nazi tattoo on his left arm.

The Internal Affairs investigation cleared Lichterman of any violations, closing the case in December, police said. They did not respond to follow-up questions inquiring whether any specific determinations were made about the tattoos.

Meanwhile, nearly five months after the controversy erupted, police brass have yet to deliver a promised tattoo policy for its ranks.

Photos of the tattoos, posted to Facebook by Evan Parish Matthews, showed a German eagle beneath the word "Fatherland" on Lichterman's left arm. The post indicated the photos were taken on July 26, 2016 at Philadelphia’s #BlackResistanceMarch during the Democratic National Convention.

The eagle appears to resemble one depicted in the Nazi Party's partieadler emblem, a symbol included in the Anti-Defamation League's "Hate Symbols Database."

That symbol features an eagle with outstretched wings, its head pointed left, and holding a wreath containing a swastika. The photos of Lichterman's tattoos did not show whether his eagle was perched on a swastika.

Mayor Jim Kenney, who previously called the tattoos "disturbing" and "incredibly offensive," released a statement that voiced the same reaction. But without an existing tattoo policy,  Kenney said police could not dismiss Lichterman.

"I am deeply offended by the tattoo and I think it is completely inappropriate for any law enforcement officer to have such a tattoo given its impact on those they are sworn to protect and serve. Since the investigation determined that the officer couldn't be dismissed because PPD does not have a policy against tattoos, we will draft such a policy so this cannot happen again.

Additionally, PPD will continue to conduct thorough background checks and psych tests for new recruits. We also work to foster a culture of acceptance, diversity and inclusion throughout the police academy and the force.

That spirit has been on display the past several weeks as officers have protected thousands of individuals’ right to protest and done so with respect and with dignity, and not a single arrest. I am confident that the actions of this officer is not reflective of our entire force."

On Tuesday, John McNesby, president of Fraternal Order of Police Lodge No. 5, reiterated his prior statements defending Lichterman, saying there was "nothing wrong" with the tattoos.

"There was nothing there to investigate," McNesby said. "He had a tattoo. There was no policy. He had it for years. He had no discipline. There was no issue with it."

McNesby said he did not know what investigators determined the eagle to represent. He declined to make Lichterman available for comment.

"I don't know what they looked at," McNesby said. "It is very rare that they find no violations."

After the photos spread across social media, Philadelphia police pledged to determine an "appropriate policy" regarding tattoos, saying the department "does not condone anything that can be interpreted as offensive, hateful or discriminatory in any form."

A tattoo policy has not yet been finalized, police said Monday.

"I know they're looking at one," McNesby said. "They haven't really showed it to us yet. Coming into the department now, they are screening a little bit more stricter. When they have something finalized we'll look at it. We'll either give a yay or nay."

Many — but not all — police departments have policies regulating tattoos.

The Pennsylvania State Police, which bans officers from wearing visible tattoos, found several troopers in violation and reportedly is advocating for them to have the tattoos removed. The union is pushing an alternative solution.