The Facebook account representing South Philadelphia's Italian Market has once again taken to the social media platform, this time in an attempt to bury the hatchet and issue an apology to Councilwoman-at-large Helen Gym after posting a lengthy call for her resignation when she advocated for removing homages to former Mayor Frank Rizzo.

The initial post, which has since been deleted from the public account with more than 21,000 "likes" that represents the outdoor market, also denounced Jane Golden, executive director of Mural Arts. Golden recently wrote an op-ed for Philly.com that said it's time for a public discussion on the future of a Rizzo mural that overlooks the Italian Market.

The emotional call for their dismissal came after both the statue of Rizzo outside the Municipal Services Building and mural were defaced last week.

"The shock and disappointment of these events were exacerbated by additional acts of vandalism and violence that occurred in our business district," read the apology posted late Wednesday. "The postings, edits and deletions by a page administrator on our Official Social Media page over the past few days should have never happened and all been since removed. We sincerely regret not having the proper protocols in place to prevent this from occurring. We denounce all forms of violence, vandalism, and hate while seeking peace in our streets, in our neighborhoods and in our hearts."

The group's entire Facebook was disabled as of Thursday afternoon. 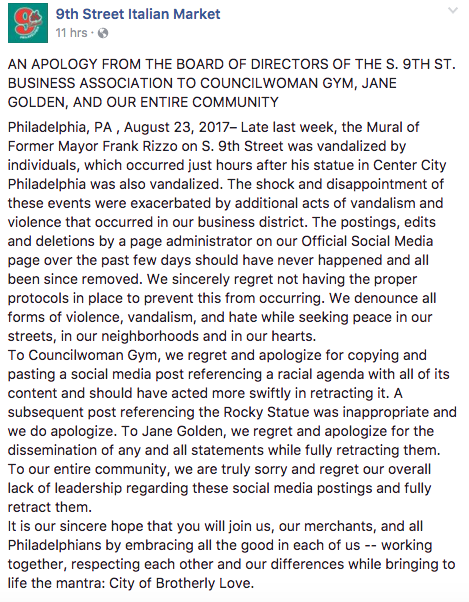 The post that spurred the apology, archived and shared on Twitter by Jon Geeting, director of engagement for Philadelphia 3.0, a political organization, called Gym "a danger to police" and "to the safety of Philadelphia" for "encouraging hate."

"My call is and has always been for a respectful public process to move the statue to a better location," Gym said in a public reply. "I'm committed to that."

Here's my reply. We need to be able to have this important conversation with empathy & respect. Like 9th St itself, ours is a diverse city. pic.twitter.com/o02AG3FrGJ

But, the story takes yet another turn. The rant was allegedly written by Jody Della Barba, who once served as Rizzo's secretary and recently appeared back in the limelight after she vocalized her opposition to the city's cyclists in an interview with Philadelphia magazine.

That small detail was revealed by the Italian Market's Facebook in yet another post that was deleted.

"We recently shared a post written by Mayor Rizzo's former Secretary," the message read, according to Philadelphia magazine, which first reported the unfolding Facebook drama. "For her this upheaval with the Rizzo Statue and Mural is personal. For us, the Rizzo Mural is part of the tapestry of 9th Street. It is a gathering place, a popular picture spot, an iconic work of art."

A revised post that's still on the page said the account had "made a mistake" by copying and pasting the status of another "user" and sharing it Saturday. Della Barba's Facebook is private.

Wednesday night's apology post was instead penned by the board of directors of the South 9th Street Business Association.

While the conversation on the removal of Rizzo's statue and mural have been raised in the past, the recent events in Charlottesville have cities and towns across the nation calling for the removal of public works dedicated to honoring Confederate or other controversial leaders.

In addition to serving two terms as mayor, Rizzo was a former Philadelphia police commissioner who used harsh tactics to reduce crime that did little for race relations.

His obituary in The New York Times is titled, "Frank Rizzo of Philadelphia Dies at 70; A 'Hero' and 'Villain.'"

"All around the country, we're fighting to remove the monuments to slavery & racism," she wrote on Twitter on Aug. 14. "Philly, we have work to do. Take the Rizzo statue down."

Lauren Hitt, spokesperson for Mayor Jim Kenney, followed up with a statement that said that "now is a good time to have that conversation about the statue's future."

Kenney said earlier this week that the decision to remove the statue is up to the city's Art Commission.