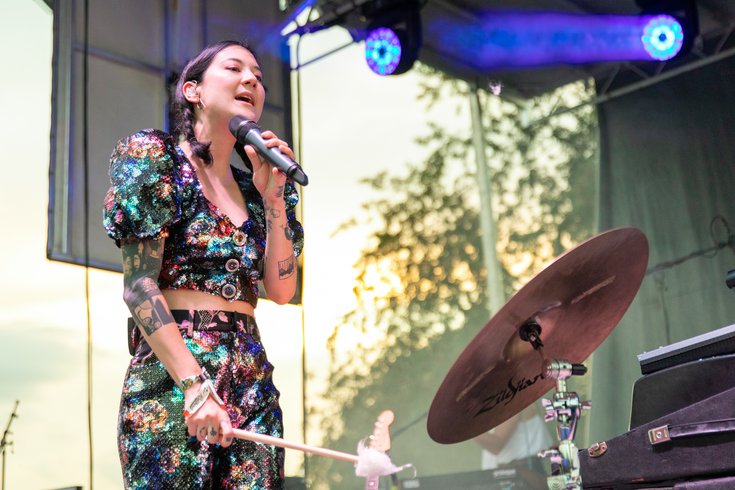 Michelle Zauner of Japanese Breakfast performs during the Railbird Music Festival at The Grounds at Keeneland on August 28, 2021, in Lexington, Kentucky. The Philly-based indie band just released a new live EP recorded at the famed Electric Lady Studios commissioned by Jimi Hendrix in the late 1960s.

Michelle Zauner has had a prolific year as a creator, releasing a New York Times best-selling memoir and a celebrated new album, "Jubilee," with her Japanese Breakfast bandmates.

The indie rockers have now added a live EP to the bonanza of output for their fans, who turned out in full force for a string of August shows that reopened Union Transfer in Philadelphia after a pandemic-related shutdown.

The EP. released on Spotify is part of the platform's "Live at Electric Lady" series, which puts artists in the famed Greenwich Village recording studio to capture the energy of decades of influential music produced there.

Among the great albums recorded at Electric Lady is Weezer's self-titled 1994 album, aka "The Blue Album," which includes the band's all-timer, "Say It Ain't So."

In a nod to Weezer, Japanese Breakfast recorded a live string interpretation of the song, with Zauner singing gently overtop and relishing the song's novelty in this arrangement.

“I played a very sloppy basement cover of ‘Say It Ain’t So’ once with my band in college (Post Post), so it was fun to revisit it from the opposite angle, stripped down with a string quartet,” said Zauner, who studied creative writing at Bryn Mawr College. “[Bandmate] Craig Hendrix did the arrangement and Quartet 121 performed the hell out of it.”

The front seven tracks on the new EP feature live versions of songs from "Jubilee" and other projects, with a mix of strings and keys that should excited Japanese Breakfast fans.

“Recording at Electric Lady was truly the perfect experience," Zauner said of making the E.P., via RollingStone. "The longer I’ve worked as a recording artist, the more I’ve realized it’s the simple, stripped-down songs that are the hardest to get right. Having the opportunity to revisit the core catalog of my songwriting in a room with so much history, surrounded by engineers and gear of the highest caliber, it was just a dream come true.”