Jay Leno on the Clintons, Bush, politics and that famous sex interview

And what he did with all that 'Tonight Show' salary 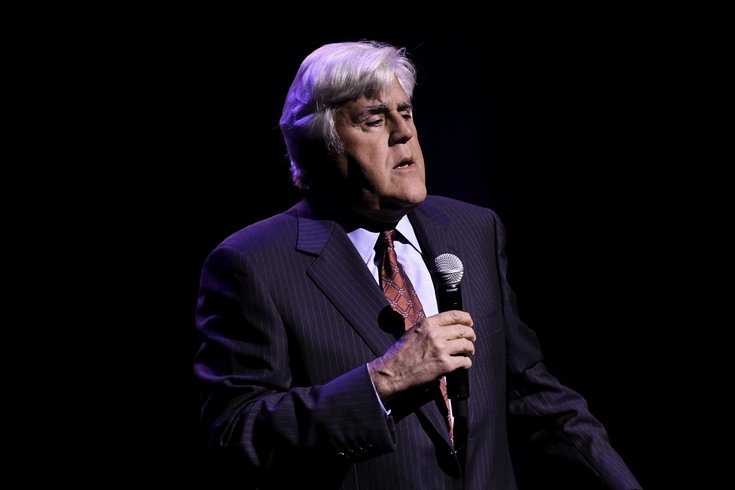 It should come as a surprise to no one that Jay Leno continues to tour as he approaches septuagenarian status.

While hosting "The Tonight Show" for 22- years, Leno typically worked 16-hour days during the week and delivered stand-up around the country on weekends.

Leno, 69, who will perform a sold-out show Saturday at the Parx Casino, reveals what Bill and Hillary Clinton are really like, if he really lived on his standup money and banked all of his "Tonight Show" paychecks and that he's no Charlie Rose.

Q: While watching you host "The Tonight Show" or catching your stand-up, fans have no idea where your stand politically. That's quite a contrast from contemporary late night chat show hosts.

A: It is. Everyone has to know your politics these days. I didn't go that route. I followed what (iconic "Tonight Show" host) Johnny (Carson) did. I would joke about both sides of the fence. I got hate mail from Republicans and Democrats. When that happened I knew I was doing something right. People thought I hated the Clintons and people thought I hated the Bush family. That was not so. I was just doing my job.

Q: But you are friends with the Bush and Clinton families. We all know what Bill and Hillary Clinton are like in front of large crowds stumping for votes. But what are they like at a small gathering?

A: That's really a really interesting question since the answer is not what most people would think. Bill comes across as suspicious and aloof and Hillary is incredibly funny, warm and charming.

Q: What did you learn about George W. Bush, who you skewered for years, after hanging out with him?

Q: Burt Reynolds once told me your shows were too rah rah for him. He didn't believe your questions were deep enough.

A: Charlie Rose I'm not. I'm guilty as charged. But I tried to have fun with the show.

Q: You also have a lot of fun as a stand-up. You've always been playful live all of these years. Many of your peers have dialed it down in terms of dates but your schedule has always been loaded. How have you avoided burning out?

Q: Is it true that you lived off of your stand-up earnings and banked your "Tonight Show" check when you hosted the show?

A: That approach goes back to when I was a kid and I always had another job. Yes, I would bank one check and use the other to live off of. It's just the way I did it.

Q: Who was the best on "The Tonight Show?"

A: Character actors who came prepared with incredible stories. Guests who I could honestly ask anything.

Q: It seemed as if that was so when you interviewed Hugh Grant after he was caught with the prostitute Divine Brown.

A: Exactly! When Hugh Grant got caught with the hooker, he came and what was remarkable was that there was no publicist or manager saying, "Don't ask Hugh about whatever." Hugh said, 'Go ahead, ask me what you want to," and he was really funny. He basically said, "I'm a guy," when he was asked about the incident. These days people talk about having sex addictions, which is hilarious.

You made a bad decision. You're not an addict. It's absurd.