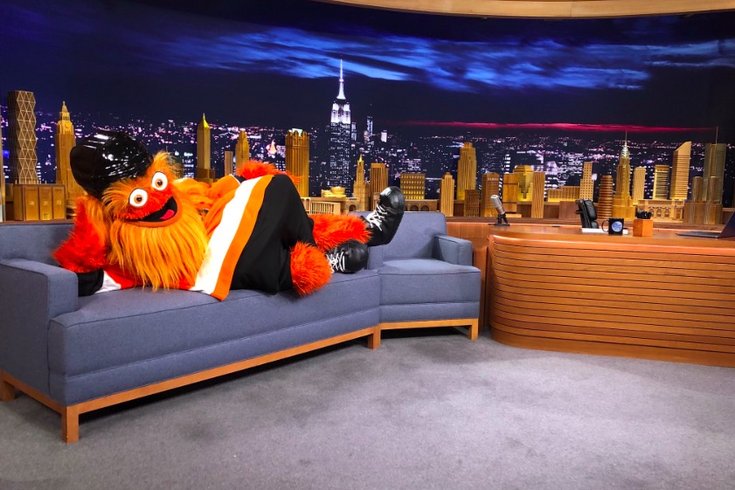 In the four days since the Philadelphia Flyers premiered its new mascot, the drunk-eyed, orange creature known as Gritty, the local reactions have morphed from a knee-jerk WTF response to, in true Philly form, one of blind respect.

RELATED: True Gritty: What the Flyers don't want you to know about their nightmarish new mascot | Flyers mascot Gritty inspires Broken Goblet Brewing to create beer in his honor

Some on social media summed up Gritty's week one trajectory best.

Philadelphia 24 hours ago: “What is this abomination of a mascot? What were they thinking?”

Philadelphia now: “I would take a bullet for Gritty”

Philly: What the f*ck is this?

National Media: What the f*ck is this?

Philly: YOU LEAVE GRITTY ALONE HE IS A NATIONAL TREASURE

As we continue to adjust to this new fixture in the city, the hosts of late night also continue to react (and recoil) from the new mascot. Earlier this week Stephen Colbert introduced Gritty to the world stage on the "The Late Show," but last night Gritty appeared in the flesh (fur?) on "The Tonight Show Starring Jimmy Fallon."

Ricky Gervais and Fallon are casually dancing to – what else? – Boyz II Men's "Motown Philly" in the show's cold open when Gritty tries to cut in. Take a look below.

The appearance was teased on social media as well.

Thanks for the New York minute, @jimmyfallon.

Earlier this week "The Daily Show" also discussed Gritty during the "I Apologize for Talking While You Were Talking" segment.

"That thing looks like a Muppet that got kicked off Sesame Street," Roy Wood Jr. said.