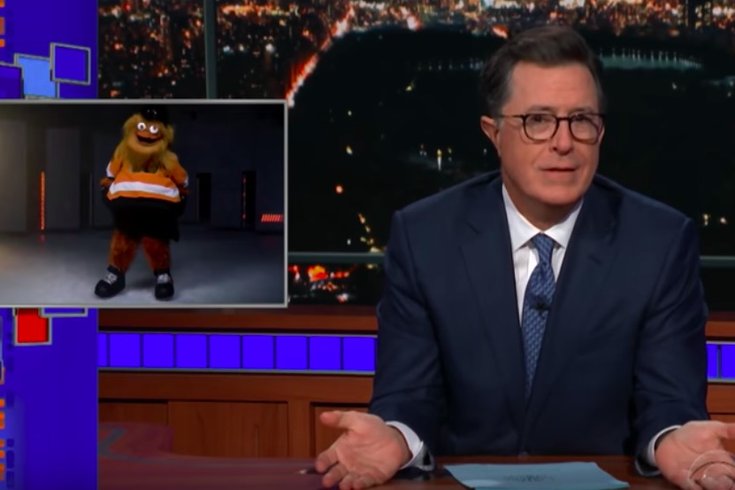 The world is still reacting and recoiling to the Flyers' new mascot Gritty, including Stephen Colbert.

“I did not realize I had taken mescaline before the show tonight,” Colbert quipped.

“That thing is horrifying. He looks like if Ed Sheeran exploded.”

On Monday, The Philadelphia Flyers debuted the newest mascot for the Broad Street Bullies since 1976’s Slapshot, who had a short-lived run of one season. Gritty is described in his official Flyers bio as “a bully…talented, but feisty, a fierce competitor, known for his agility, given his size.”

Colbert went on to relay bits from Gritty’s bio, which claim that "he’s been around for a lot longer than we know, and recent construction at the Wells Fargo Center disturbed his secret hideout, forcing him to show his face publicly for the first time."

“Nothing friendly gets disturbed from hibernation by a construction project. No movie starts with: ‘Scientists have awakened an ancient evil in the arctic. Let’s put blades on its feet and teach it how to Macarena.’”

While Gritty made his debut in person Monday at the Please Touch Museum and news of his arrival on Earth spread like wildfire on social media, it took little time for him to hit the ice – and hit it hard he did.

During "The Late Show" segment, Colbert played a clip of Gritty slipping and falling on the ice at the Wells Fargo Center.

“Don’t worry, that cloth extension two feet above his head was wearing a helmet,” he said.

Earlier in the day Tuesday, fans also posted videos to Twitter of Gritty on center ice shooting a fan in the back with what appeared to be a T-shirt cannon.

Gritty shooting Flyers fans point blank with a T-Shirt cannon is the least shocking thing of all time. Hey mascots, keep your head on a swivel. There is a new sheriff in town. pic.twitter.com/Dz3S49iBdN

Stay safe out there!