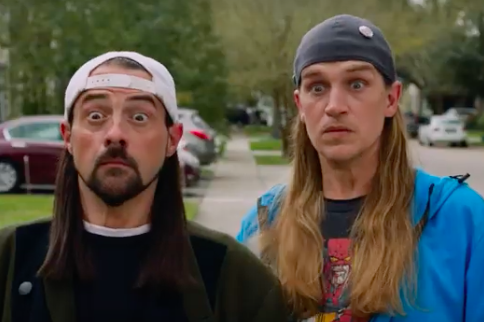 Kevin Smith's "Jay and Silent Bob Reboot" hits theaters Oct. 15, 2019. A trailer for the film is full of cameos and coarse language, as expected.

Jay and Silent Bob are back, and they're as vulgar as they've been since the dawn of the View Askewniverse.

There's a lot going on in this trailer — almost all of it not safe for work — but the very meta gist of the movie is that the duo is trying to thwart Hollywood's creation of a "Bluntman and Chronic" reboot. It's a reboot about two characters who are trying to prevent a reboot from being made about them.

Is the world ready for Jason Mewes tucking? Kevin Smith obviously thinks so, but then again he is the author of the worst tweet known to mankind. Sorry if you clicked on that.

An interesting thing about this movie is that it was something of a last resort for Smith. He had been hoping to create a "Mallrats" sequel or television series that he wanted to film at the since-demolished Granite Run Mall in Delaware County, and later at the Exton Square Mall in Chester County. Those plans fell through, as did plans for a third "Clerks" movie.

RELATED: John Leguizamo on his one-man show, Latin history, and running into Trump at the club

Smith has taken flak in recent years for struggling to create movies that live up to his '90s glory days, or else boldly move past them. While the times have shifted away from his style, he's remained a cult hero and an indie filmmaking authority.

You know what you're getting when Jay and Silent Bob are involved, and the promise of so many cameos in this reboot (including Ben Affleck, who had a long-running beef with Smith) gives the project some added excitement. We'll see how it fares when it hits theaters Oct. 15.