John Leguizamo on his one-man show, Latin history, and running into Trump at the club

The actor talks to PhillyVoice ahead of his Kimmel Center appearance this weekend. 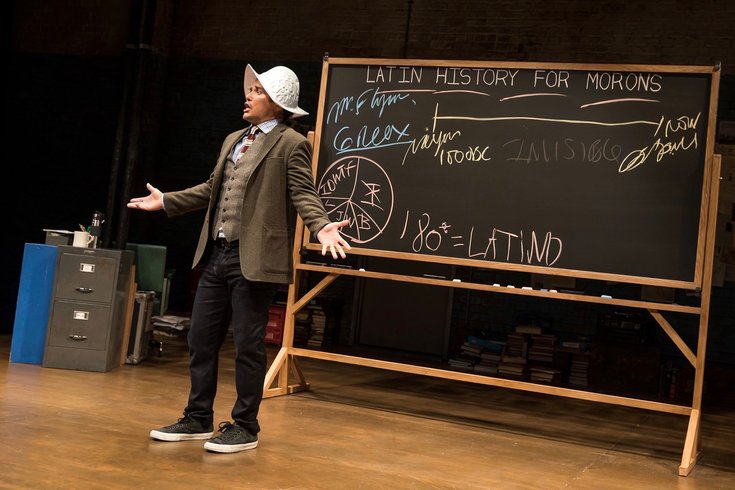 John Leguizamo has been active performer since the early 1980s, splitting his prolific career between movie and TV acting and a series of one-man shows. Leguizamo's six stage shows have all been personal to different degrees, but his latest one, "Latin History for Morons," is especially of the moment.

"The genesis of the show is that my son was being bullied at school in 7th and 8th grade, and racially profiled, and I wanted to weaponize his information," Leguizamo told PhillyVoice in an interview this week. "I wanted to give him facts, and data, and Latin war heroes and all kinds of information to empower him."

But once he did the research for that purpose, the Colombian-born, New York-raised actor found that he was the one who was learning about that history.

"I was the one that was un-moronized, de-stupified, and un-dumbificated. I was one that started feeling incredibly proud knowing that Latinx people have made huge contributions to the world, and to the making of America."

The result was a show that debuted at New York's Public Theater in 2017, later moving to Studio 54 on Broadway. The following year, it was nominated for a Tony award for Best Play.

Leguizamo is bringing "Latin History For Morons" to Philadelphia this weekend for a pair of shows at the Kimmel Center's Merriam Theater, on Friday and Saturday nights.

The show takes the form of Leguizamo in a classroom setting, in which the performer is the teacher and even writes on a chalkboard. Leguizamo said he had to do a lot of practicing with drawing certain things on the chalkboard, such as the shapes of countries as well as "anatomical parts."

While there's nothing specifically about Philadelphia in the show, the performer thinks there's a lot people from the region will relate to in it.

Leguizamo's show arrives in Philadelphia in a specific week when questions of race, identity, and American-ness are being discussed, in often raw and angry terms, in the news each day.

"It definitely makes the show more impactful, unfortunately, and ironically," he said of the recent comments by President Donald Trump. "The worse the administration gets, the more important my show becomes as an anecdote to what's going on in this administration."

Leguizamo and Trump, oddly enough, both grew up in Queens. And while, he said, they "were not in the same circles," the actor remembers seeing the future president out and about in New York.

"When I had some success… I saw him in all the clubs, always stalking the models, the young models," Leguizamo said of Trump. "I saw him in every club, he's always hanging by the door."

The actor's other big project this year was "When They See Us," the four-part Netflix series from filmmaker Ava DuVernay about the Central Park Five case. In the series, which debuted on Netflix in May, Leguizamo played Raymond Santana Sr., the father of one of the four young men, also named Raymond Santana, who was falsely convicted in the notorious 1989 case. Leguizamo did some of the more moving work of his career, in scenes mostly set after his son is released from prison.

"I would have paid to be a part of that show, that's how important I thought it was," Leguizamo said.

"The show has had a lot of great, huge consequences," he added. "One, it's the number one show on Netflix since it aired on May 31, which is a huge coup for black and Latinx people of color, to see that our shows can be number one." In addition, he said, there have been professional consequences for two of the prosecutors from the case, including best-selling mystery writer Linda Fairstein who was dropped by her publisher in the wake of the show.

Leguizamo's movie career has run the gamut from the first two "John Wick" movies to Baz Luhrmann's "Romeo & Juliet" and "Moulin Rouge" to the drag comedy  To Wong Foo, Thanks for Everything! Julie Newmar.

But the actor said one of his favorite films was "Summer of Sam," Spike Lee's 1999 drama about the Son of Sam killings and other events in New York City in the summer of 1977. The film has been frequently referenced this year, as it's marking its 20th anniversary, and even the past week, when another New York blackout reminded some of the 1977 blackout's depiction in that movie.

"That was the most fun I've ever had on a film," Leguizamo said. "Working with Spike, he's an actor's director. We were pushing boundaries and places where maybe I thought I was gonna go mad and never come back. It was really some of my best acting that I've done."

"Latin History For Morons" will have two performances at the Merriam Theater, on July 19 and 20, both at 8 p.m.