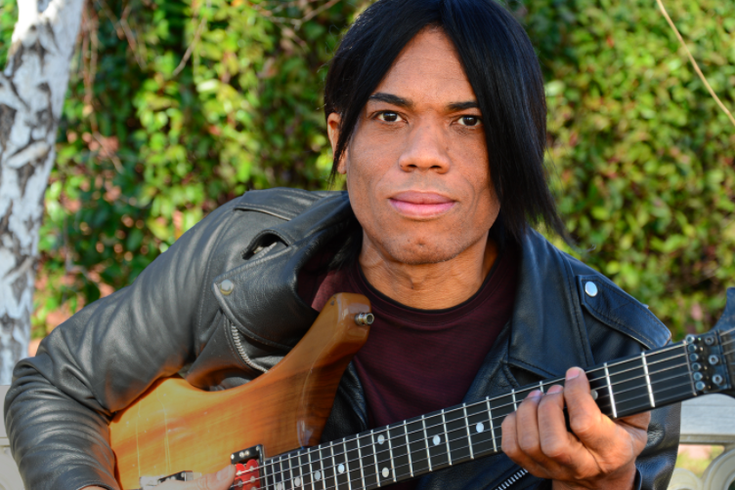 When discussing Philadelphia-born jazz-bo Stanley Jordan, his innovative work as a guitarist - his "touch style" of fretting with both hands on the neck - is just the beginning of what makes him fascinating.

Known initially for percussive, piano-style hammering on the six string and compositions with a pop-soul feel, Jordan has evolved into a still-rhythmic sound that's languorous and fluid. That trembling tone is just right for the jam band musicians he's played with of late, such as Phil Lesh and Dave Matthews. As a person, too, Jordan has, within the last decade, opened himself to a gender fluidity that defies easy categorization, something "trans," but without labels. And being label-less is just perfect for Jordan, as fans will witness during a rare homecoming show in Philly at South Kitchen & Jazz Parlor this Sunday.

"I did find that there were some things that I could only do with a piano," said Jordan via phone from his home office in Sedona, Ariz.

"And I still have most of the expressiveness of the guitar at my command. People still, after all this time, don't always think of me as a guitarist because I don't play conventionally. I assure you, however, I do consider myself a guitarist. The touch technique really is just the best of both worlds, a nice in-between. It has always offered a whole new ground."

Anyone listening to Jordan recordings, from his early Blue Note albums (e.g. 1985's "Magic Touch"), to his latter day work (2008's "State of Nature") can attest that the guitarist continually finds fresh firmament.

"Compound lines or playing two different lines with the left and the right hand - the possibilities have really opened up everything I do as a player and as a composer."

Jordan claims that anything can make a huge difference when you're playing guitar with the hammering precision of a piano.

"It could be temperature changes in the room, the humidity outside or the strings being old after just one song. During one show, everything can shift. I can get a cold sticky sweat on my fingers and that could radically alter everything."

Then there are the personal changes in Jordan's life. Just as he doesn't fit an easy mold as a musician, Jordan embraces gender fluidity (for the record, he's not uncomfortable with gender-specific pronouns). When discussing the outward changes in his dress and hair, the guitarist sees those shifts in league with who he is as an artist.

It could be temperature changes in the room, the humidity outside or the strings being old after just one song."

"I believe it happened gradually over a period of time, but as it was happening - the more I decided and was able to be myself - the more I felt that it was helping my music. I could come through more authentically. After that, there was no turning back. I'm happy to have occupied different spaces in my life. I like the body that I have, but am curious as to where this will go."

The challenge for Jordan going forward is to integrate all that he is and feels - inside and out - just as he has his diverse musical tastes throughout his career.

"It would be inauthentic for me otherwise…in many different ways. I'm still a work in progress. You see how people might call me a jazz artist and find that limiting. I love being called a jazz artist. I would just add that 'jazz artist' isn't enough to fully say what I do. It doesn't say anything about improvising or putting my personal stamp on the music. That's the same with who I am as a person. Calling me a guy is fine, but it doesn't resonate completely with who I am. Besides, even the word 'trans' is in flux. I don't have a word for what I am, save to say, that the traditional box of maleness and masculinity didn't work for me."

What we can define Jordan as - despite his move to Arizona - is a proud Philadelphian who finds soul in everything he does, and easily equates that to his hometown.

"Most of my earliest memories are of living in Mount Airy and the sights and smells of the area. When I came back to jam in Philly as a young adult, I recall comparing the sound of players there to my experiences in Manhattan. There was a soulful thing to Philly that I couldn't get anywhere else."