The donation is from philanthropists Sidney and Caroline Kimmel; the new building will create labs for 56 NIH-funded research teams 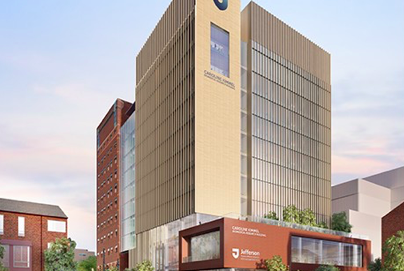 A $70 million gift will help Thomas Jefferson University fund the construction of the Caroline Kimmel Biomedical Research Center at Ninth and Locust streets in Philadelphia, shown in the rendering above.

The planned building at Ninth and Locust Streets will be called the Caroline Kimmel Biomedical Research Building. It will replace and existing Jefferson parking garage.

The total cost of the project is expected to fall between $300 million and $350 million, with a bridge connecting the facility to the Bluemle Life Sciences Building, according to the Philadelphia Business Journal.

”This gift will have a profound and lasting impact on Jefferson’s ability to further pursue scientific discovery,” said Mark Tykocinski, provost and executive vice president for academic affairs and dean at the Sidney Kimmel Medical College at Thomas Jefferson University.

The gift from the Kimmels builds upon more than $200 million in funding the university has accepted from the couple in recent decades, paving the way for the Sydney Kimmel Cancer Center and the renaming of the Sidney Kimmel Medical College in 2014.

A timeline for construction and completion of the project was not revealed Tuesday night.