The robot provides a fresh, healthy food option – particularly when the hospital's cafeteria is closed 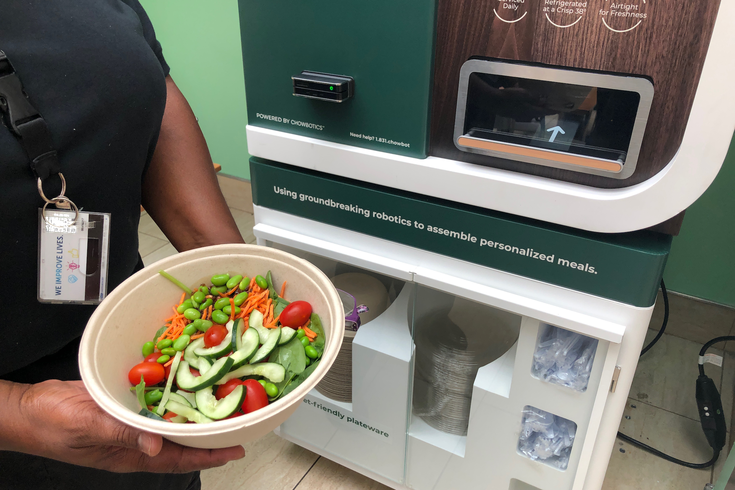 The latest healthy food initiative at Jefferson Health is bringing people face to face with a robot on its Center City campus.

Dubbed "Sally," the robot custom prepares salads for employees, patients and hospital visitors at all hours of the day. People can select salads made of up to 22 ingredients, including peppers, tomatoes and grated cheese.

For those overwhelmed by the options, the robot also has preprogrammed salads and grain bowls on hand. Most salads cost between $7 and $8.

The robot – the first of its kind in Pennsylvania – is designed to provide all people at the hospital with fresh, nutritious meal options at any time, but particularly when the Thomas Jefferson University Hospital's cafeteria is closed.

Employees working late and overnight shifts have limited healthy choices, said Richard Webster, president of Thomas Jefferson University Hospital. In the middle of the night, especially, the most convenient food is often not the most healthy option.

"We have the convenience of being in Center City, where people can walk out the door and find something, but, again, they're not always healthy options," Webster said.

Have you met our new salad-making #robot yet? 🥗😋 @chowbotics pic.twitter.com/Dzp2yibHEy

Simply Good Jars are refrigerated, pre-made salads that contain dressing on the side. But it is the robot that has captured people's attentions.

"There's a little bit of the coolness of it, watching it swirl around and deposit the various ingredients that you're adding," Webster said.

But the robot brings more than convenience and coolness. It reduces the risk of foodborne illness and cross-contamination by separating ingredients in canisters. Ingredients are restocked each morning and evening to maintain freshness.

"It's our food, our staff that are stocking the containers," Webster said. "That's been a win. Especially the younger generations – our new residents and interns coming in, I think many of them are much more focused on healthy options."

ICYMI, we now have a salad-making robot at @TJUHospital and it’s awesome!

Jefferson Hospital is among several hospitals that are participating in the Philadelphia Department of Public Health's "Good Food, Healthy Hospitals" initiative, which urges hospitals to provide healthier and more sustainable food and drinks to employees, patients and visitors.

Over the years, Jefferson has eliminated its deep fryer from its cafeteria and organized vending machines so that the healthiest options – water and juice – are at eye level, Webster said.

Now, it's got a robot dishing salads.

"It's always been a careful balance of trying to meet the preferences of both patients and employees while trying to promote healthy choices," Webster said.