Increasingly, the future of oncology care is moving away from hospitals and clinics 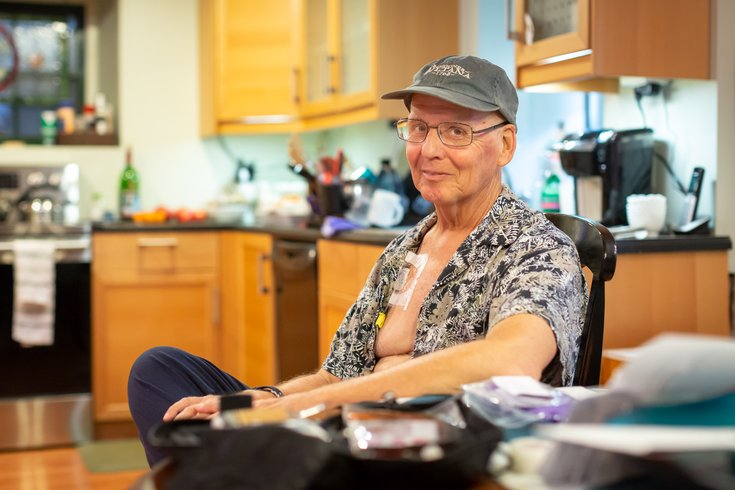 Ed Poppert receives a chemotherapy treatment intravenously in the kitchen of his home in Royersford, Montgomery County, Tuesday, Aug. 6, 2019.

Ed Poppert spent five days this month carrying a chemotherapy bag at his side – no matter where he went.

But he was free to go virtually anywhere in and around his Royersford, Montgomery County home, a 19th century church building that he and his longtime partner, Mary Jeffers, have converted into a house.

And that sure beat spending four nights in a hospital.

Poppert, 67, was diagnosed with Stage 2 lymphoma earlier this year. Thanks to an initiative offered by Jefferson Health, Poppert has received most of his chemotherapy treatments at home – a rare option among U.S. health systems. But one likely to expand in the not-so-distant future.

Traditionally, patients under the same chemotherapy regimen as Poppert are admitted into a hospital. That's because the regimen, known as EPOCH, must be administered continuously for 96 hours. Other chemo regimens also may require hospitalization, but many simply require patients to shuffle back and forth between an outpatient infusion center for several days at a time.

But doctors anticipate this all changing in the years ahead as health systems, like Jefferson, transition to a value-based model that prioritizes patient-centric care.

"The idea that care has to happen in a clinic or in a hospital is one that we're moving away from," said Dr. Nathan Handley, a medical oncology specialist at Jefferson. "It's not just us in oncology. It's an organizational trend here and something that I think is really important to the goal and mission that we're doing."

In Poppert's case, he completed his first chemotherapy cycle in the hospital to ensure that he would not suffer any complications. But subsequent cycles could take place at home, as he preferred.

Now, Poppert only visits the infusion center at the start and conclusion of his cycles, when a portable infusion pump is connected and disconnected. A nurse then visits him every day at home to change the chemo bag and complete a checkup – a process that takes about an hour.

"If you go back 50 years, where did people see a doctor? They saw them at home. They didn't go to the doctor, the doctor went to them." – Dr. Nathan Handley, medical oncology specialist, Jefferson Health

"That's it, the rest of the time is yours," Poppert said. "You can do whatever you want. You're completely mobile."

The initiative provides patients with a comfortable environment during a treatment that can be taxing and have unpleasant side effects. In Poppert's case, it also saved Jeffers, 54, hours of commuting along the Schuylkill Expressway.

"For us, we live 35 miles out of the city," Jeffers said. "It's definitely less of a hassle for him to be here. Inpatient – to get the chemo and for me to drive back and forth every day – that was a lot. Now, it's just one visit to get hooked up and another visit at the end to get disconnected. It's much, much nicer."

The experience also offered the couple a glimpse at the future of cancer care. 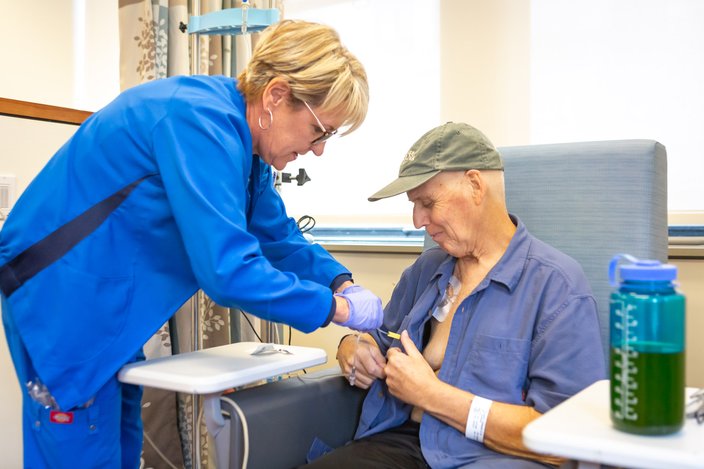 Ed Poppert is connected to a pre-treatment infusion by Diane Murray, a nurse at Thomas Jefferson Health in Center City Philadelphia, in early August.

Most cancer care in the United States occurs in outpatient settings, though hospitalizations sometimes are necessary for planned treatments, including some chemotherapy regimens, or unplanned complications.

But Handley and other doctors envision health systems eventually shifting more cancer care to the patients' own homes, including much of what happens now in the hospital.

"If you go back 50 years, where did people see a doctor?" Handley said. "They saw them at home. They didn't go to the doctor, the doctor went to them."

"It was just a really good experience. The experience in the hospital was good, too. They have a good and caring staff. But the thing of being at home is really nice." – Ed Poppert of Royersford, cancer patient

Research suggests that "hospital at home" programs improve both patient outcomes and satisfaction while reducing health costs. Some U.S. health systems already have launched such programs to treat a variety of other acute issues, like congestive heart failure exacerbations and chronic obstructive pulmonary disease flare-ups.

Cancer care could be next, with at-home chemotherapy serving as the starting point.

One study found that more than 20 regimens typically administered in the hospital could be successfully given at home. Such services are commonplace in Europe, Handley said.

They are far more limited within the United States, as is medical research. But another study found that at-home EPOCH infusions – like Poppert's – saved $3,291 per cycle by avoiding hospitalization costs and another $4,939 per cycle for drug acquisition.

Additionally, patients overwhelmingly preferred the comfort of their homes to the hospital – a finding reflected in other similar studies. 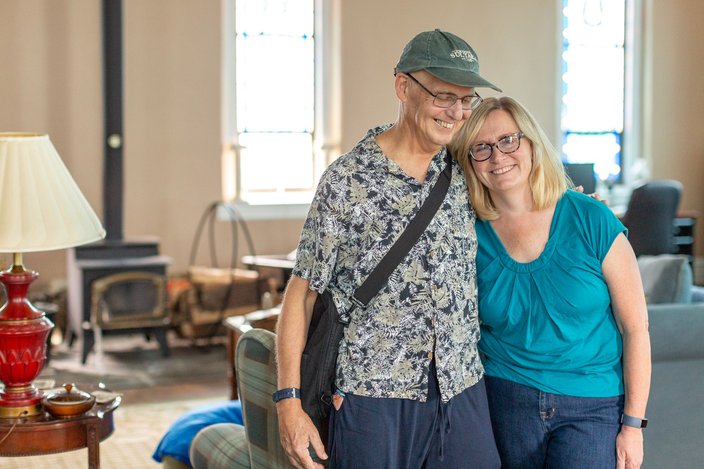 Ed Poppert and his partner, Mary Jeffers, have spent the last 16 years converting an historic church into their home in Royersford, Montgomery County. “It was just a really good experience,” Poppert said of his chemotherapy treatment. “The experience in the hospital was good, too....But the thing of being at home is really nice.”

'BEING AT HOME IS REALLY NICE'

Poppert now echoes that attitude, though he and Jeffers initially had some reservations.

Following his first chemotherapy cycle, Poppert spent several days in the hospital as he struggled to eat and stay hydrated. Still, his oncologist, Dr. Adam Binder, encouraged the couple to give at-home chemotherapy a shot.

"After four days in the hospital, I thought, 'Do we really want to do this at home?'" Jeffers said. "It seemed a little daunting. Dr. Binder is pretty calm and was just like, 'Let's just try it.' So we did."

Several institutions have demonstrated that at-home infusions are safe, Palmisiano said. Patients must receive their initial dose at Jefferson's infusion center, where nursing staff examine the patients and complete a safety checklist.

Once the patients head home, on-call staffers, including nurses, are available to troubleshoot technical issues and respond to any medical complications. Patients also must have reliable transportation in case of an emergency – even if that means calling an ambulance.

"What we don't want is for something to happen in the home in the middle of the night and patients to feel that they're unable to call in and get to the hospital in a timely manner," Binder said. 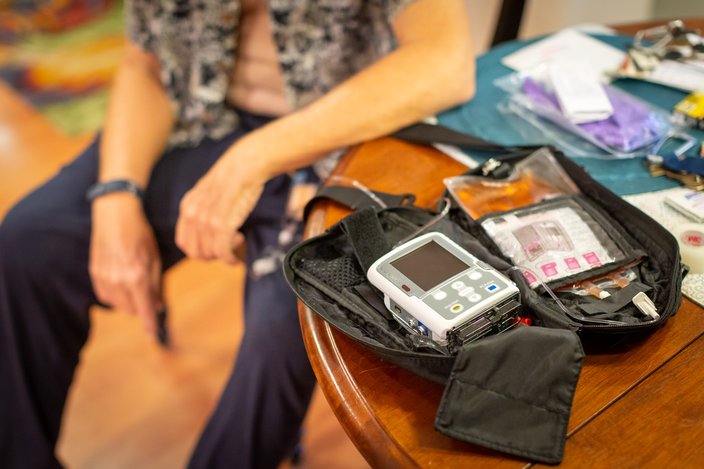 Ed Poppert's chemotherapy infusion pump and a 24-hour bag of medicine sit on the kitchen table of his home in Royersford, Montgomery County.

Poppert has only experienced two minor hiccups – both on his first day receiving treatment at home. His pump began beeping due to an air bubble as he and Jeffers drove home from the infusion center. Over the phone, a staffer helped him fix it.

When the issue reoccurred at dinner time, a nurse arrived at the home within 20 minutes. She showed Poppert how to position the bag in a way that prevented bubbles from occurring.

Now, Poppert expects to complete his remaining three cycles at home, praising the responsiveness and geniality of his care team.

"They were proficient, professional – you name it. Very personable," Poppert said. "It was just a really good experience. The experience in the hospital was good, too. They have a good and caring staff. But the thing of being at home is really nice."

During his latest cycle, Poppert and Jeffers completed yardwork in the garden outside their home. In a previous cycle, they went out to lunch and took a few walks – activities they might do on any weekend.

"You feel like you have a little bit more control," Jeffers said. 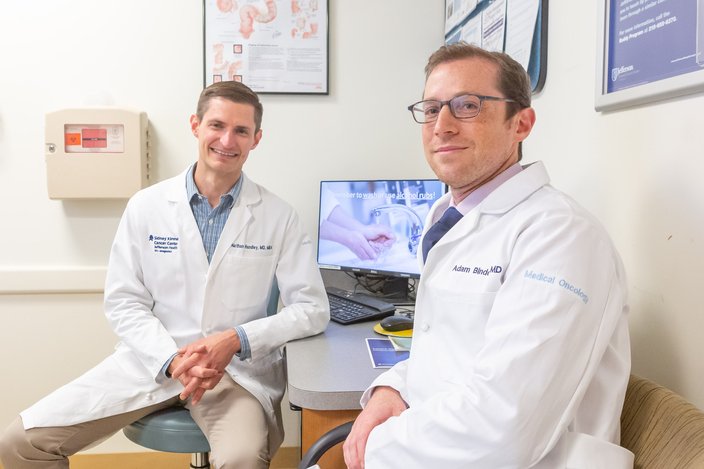 A FUTURE DEPENDENT ON REIMBURSEMENTS

Establishing – and expanding – such initiatives has its share of barriers.

Some chemotherapy regimens carry a higher risk of complications and, in turn, need the backup support and resources more readily available in an infusion center, Binder said.

Delivering chemotherapy drugs presents a logistical challenge, as some are only stable for relatively short periods of time. A mobile pharmacy is one possible solution to that, Binder said.

"We're probably not making as much money as we would if we brought them into our infusion center or in the hospital. But our department and leadership feels like we should be doing what's right and patient-centered as opposed to what might be the most profitable." – Dr. Adam Binder, Ed Poppert's oncologist

And while staffing adds another logistical hurdle, one study found that nursing costs were 77 percent lower for intensive chemotherapy regimens delivered at home. Total costs were more than 50 percent lower, including overhead and transportation expenses.

But just because costs may be lower, that doesn't necessarily mean the endeavor is profitable for health systems.

But that could shift as more cancer care payments become bundled.

"We're probably not making as much money as we would if we brought them into our infusion center or in the hospital," Binder said of Jefferson's at-home chemotherapy initiative. "But our department and leadership feels like we should be doing what's right and patient-centered as opposed to what might be the most profitable."

For at-home chemotherapy initiatives to become more sustainable, Handley said, payers and providers need to become more aligned. But doing so requires taking some ginger steps, given the many variables at play.

Handley likened it to getting into a canoe. Step recklessly from the dock and the whole canoe could flip its passengers into the water.

"If a program were to just up and change everything very quickly, it would be very unlikely to be sustainable in the reimbursement environment in which we live," Handley said. "It could lead to a collapse of a hospital."

Many chemotherapy side effects that prompt hospitalizations could be safely treated at home, he said. And hospitalized patients that typically would be discharged to a skilled nursing facility may be able to go straight home.

"Being able to manage those patients at home is on the horizon," Handley said. "We have the same kinds of financial and logistical challenges associated with that. But we know that it can be done."