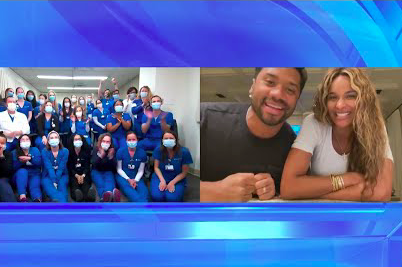 The 'Swab Squad,' a team of nurses at Thomas Jefferson University Hospital in Philadelphia, joined Ellen DeGeneres for a group interview about its dance routines. The nurses are operating a COVID-19 testing site outside the hospital in Center City.

The team of nurses known as the "Swab Squad" at Philadelphia's Thomas Jefferson University Hospital made an appearance on "The Ellen Show" on Tuesday morning, receiving words of encouragement from pop star Ciara and her husband, football star Russell Wilson.

The nurses, who have been working at Jefferson's COVID-19 drive-thru testing site in Center City, drew national attention when they began posting videos of group dance routines to popular songs, from Ciara's "Level Up" to The Weeknd's "Blinding Lights."

It’s Tik-Tok Sunday everyone! The ORIGINAL Swab Squad, #levelingup entering into this new week. 🏥 🏥 Friendly disclaimer- we waste no PPE. We take our jobs, our patients, and the resources we use seriously. However, we also take our team morale and mental health just as serious. 🏥 🏥 This is a fun way we can build up our teamwork during #covid times. #together #wegotthis

Head nurse Jeff Doucette told Ellen that the team has tested more than 2,000 people for COVID-19 during the last month.

"This team has come together formed this amazing family that has really kept this community safe," Doucette said. "And we are so incredibly proud of them and everything that they're doing."

"It's very scary," said the nurse, who identified herself as Joanne. "We go out, we don't know which patients are positive, which aren't. They're coughing in our faces. We're trying to stay safe. But on the other hand, we're nurses. We're here to inform our anxious patients, let them know what to do, what steps to take, and then we're reassuring them all the time that it's going to be okay."

Jeff Salvatore, the site coordinator for Jefferson's drive-thru testing site, said the "Level Up" routine began as a way to get the team prepared for long days.

"Every morning, we kind of come together and we talk and boost ourselves up," Salavatore said. "How are we going to be able, from 8 to 5, stay focused and do our job taking care of these patients? And 'Level Up' just has that message and we listen to it often in the morning."

She made a surprise appearance on "The Ellen Show" to further share her appreciation.

"You guys are doing something so amazing and so special," Ciara said. "You are giving the world joy in a time when we need it by dancing and leveling up. Your 'Level Up' challenge was amazing and I want to encourage you guys to keep on going strong because we're all in this together."

"What's up, Squad?" Wilson said. "You guys keep leveling up! Keep doing your thing. Keep making a difference. You all are true, true heroes."

Through tears, one of the critical care nurses on the Jefferson team explained that despite the quarantine guidelines keeping each of the nurses apart from their respective families, they have all bonded through their work together.

"I had an experience last week when I found out that the day had come that I was back in the medical ICU, basically the epicenter of the COVID-postive patients needing ICU-level care," the nurse said. "I was scared. I just reached out in our group chat and say, 'hey guys, I'm going to the ICU today and I'm scared.' And every single one of them responded immediately, just giving me words of encouragement."