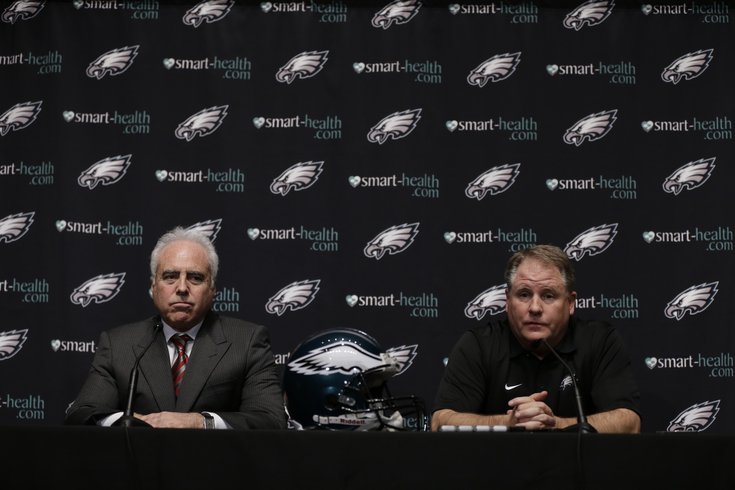 This was less than three years ago.

It is less than a year since Jeffrey Lurie gave Chip Kelly "the juice," or "full control" of the Philadelphia Eagles, which proved to be too much, too soon for the unique head coach. And now, Kelly is gone, just shy of three years after compiling a 26-22 career professional record.

It would have been easy for Jeffrey Lurie to stick with Kelly for at least one more year, as most expected, but Kelly's deteriorating system warranted a change and Lurie made the difficult but correct decision to cut bait.

Kelly's tenure started off with an emphatic bang in Landover, MD, when the Eagles went on the road to face the reigning NFC East champion Washington Redskins. Kelly unleashed his fast-paced offense on the NFL, and the early results were impressive. Washington and many other teams seemed completely unprepared for Kelly's frenetic style, as the Eagles set an all-time NFL record with 99 plays of 20+ yards in Kelly's rookie campaign.

However over the next two years, many teams around the league began to implement hurry-up looks in their offense, and opposing defenses became far more prepared to handle Kelly's approach. The numbers declined dramatically, as shown below by the Eagles' "per drive" stats from 2013 to 2015:

Part of the downfall of Kelly's offense was his decision to replace a number of great Eagles players during his tenure. DeSean Jackson was unceremoniously dumped in 2014, and Kelly was unable to replace his big plays. LeSean McCoy was traded to the Buffalo Bills and replaced with a wholly ineffective DeMarco Murray. Evan Mathis was released over a minor contract disagreement despite the Eagles' complete lack of youth and depth along the offensive line. The list goes on and on, but the end result was that Kelly's roster got significantly worse.

Kelly's drastic offseason maneuvers might have been more palatable if the team was building toward long-term goals, however, it was clearly of the "win now" variety, as it went from the second-youngest in the NFL when Kelly became the head coach to the fifth-oldest.

A big part of the reason for Kelly's decision to jettison those star players was to create a culture of men who would buy into Kelly's ideals. Adding "culture fits" was less of an innovation, or more of a necessity, as many former players harshly criticized Kelly's fast-paced practices, fewer days of rest, and sports science (cough, big brothering) initiatives, such as sleep monitoring and urine analysis.

During his first six years as a head coach at Oregon and Philadelphia, Kelly racked up a 66-19 regular season record. His culture appeared to stay intact when the team was winning, but it seemed to unravel during the immensely disappointing 2015 season. Meanwhile, Kelly's more popular ideas are now the norm around the league, as other franchises quickly caught up to Kelly, who was unable to stay ahead of the game.

Going forward, one of the major decisions the Eagles will have to face this offseason is the selection of a quarterback, whether that be the incumbent Sam Bradford, a rookie draft pick, or "other." After Kelly faltering to the level he did in 2015, if Kelly's decline accelerated in 2016, he would have already steered the franchise in a direction at quarterback that would potentially not suit a future head coaching hire. By replacing Kelly now, the new coach and general manager in charge can select a quarterback who can most effectively carry out their long-term vision and groom him accordingly.

Stability at the head coaching position is a common trait among the most successful franchises in the NFL, and its importance cannot be understated. However, at some point, there comes a time to recognize when the franchise is clearly going in the wrong direction, and a long term plan is not evident.

That time came for Kelly. Kudos to Lurie for taking action.