The 13-story-tall ride, inspired by Pine Barrens mythology, has a top speed of 58 mph 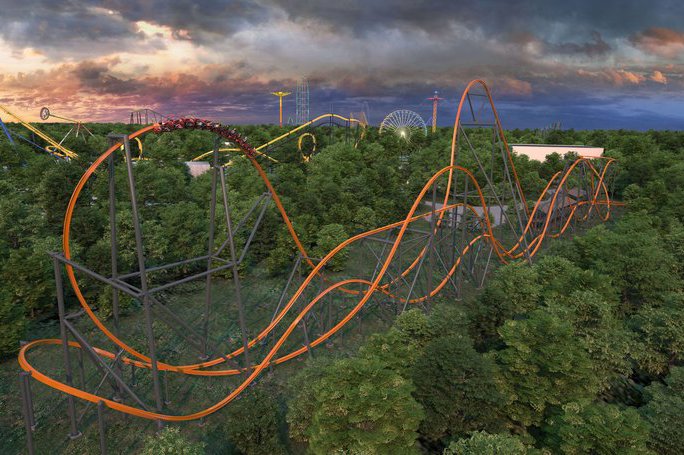 The Jersey Devil Coaster will be the tallest, fastest and longest single-rail roller coaster when it debuts at Six Flags Great Adventure in Jackson, New Jersey, in the near future. It gets its name from the legend of the Pine Barrens' Jersey Devil.

Six Flags Great Adventure is putting the finishing touches on one of its most anticipated roller coasters to date — the imposing Jersey Devil Coaster.

Named after the mythical creature of Pine Barrens folklore, the new coaster is nearly two years in the making and has been touted by the amusement park as the world's tallest, fastest and longest single-rail roller coaster. It towers 13 stories and reaches 58 mph as it blazes along 3,000 feet of rail.

As New Jersey legend has it, Mother Leeds cursed her 13th child upon its birth in 1735 and the infant transformed into the winged beast we know as the Jersey Devil. The mysterious Pine Barrens denizen has been the subject of alleged sightings over the centuries — including one creepy video shot in Pennsylvania in November 2015 — but there's no firm record of the mythological demon's existence.

Legend actually has it that the Jersey Devil, a strange mix of kangaroo, goat and vulture, killed Mother Leeds shortly after its birth and transformation. Maybe she's been a water person all this time.

The Jersey Devil Coaster will feature four trains of 12 passengers. The lift-hill alone climbs 130 feet in the air. The ride's intense elements include a steep 87-degree first drop, an overbank cutback and three dramatic inversions — a 180-degree stall, raven dive and zero-gravity roll.

"Jersey Devil folklore has been a source of fear and intrigue here in the Pine Barrens for more than 200 years, and this iconic piece of New Jersey history inspired the design for this monstrous scream machine," said John Winkler, the park's president.

Additional ride testing, inspections and New Jersey state certification remain to be completed, but Six Flags Great Adventure plans to announce an opening date in the near future.

On Saturday, the park will update its mask guidance and other COVID-19 mitigation measures. Vaccinated guests will no longer need to wear masks outdoors, but they will still be required in indoor areas.

An update to our safety protocols.

Posted by Six Flags Great Adventure on Wednesday, May 19, 2021