The sculptures will be installed on a temporary basis, but organizers hope it becomes a long term project 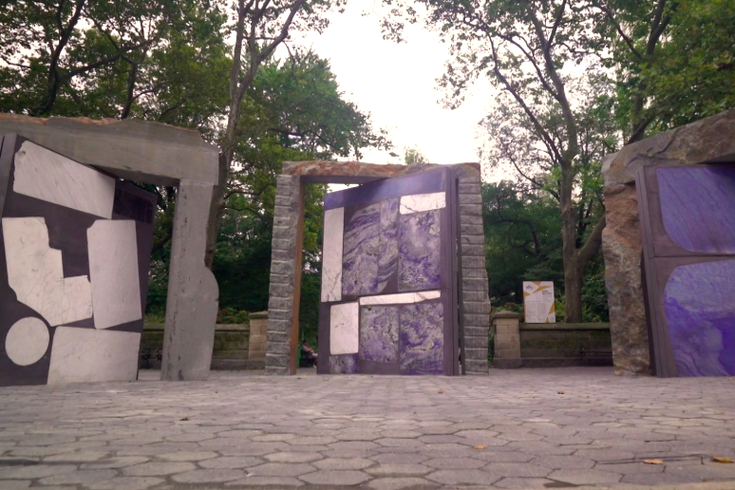 The Philadelphia Contemporary will install a series of sculptures along the Delaware River waterfront over the next year on a temporary basis. One of the sculptures set to arrive is 'Doors for Doris' by Brooklyn-based artist Sam Moyer.

A rotation of artwork installations along the Delaware River is set to begin next month and last at least one year.

Called "Water Marks," Philadelphia Contemporary is bringing the project to the riverfront, and a new piece of artwork will come to the waterfront every few months, Director Harry Philbrick said.

"One of our goals is to get people down to the waterfront because I think it’s a really underutilized resource for the city, and DRWC has put so much into it," Philbrick told WHYY.

While all the sculptures set for display will be temporary and on view for at least a year, Philbrick said the goal is to make it a long term project.

First up is a sculpture of tall polls topped with bronze birds called "A Moment Without You," which will appear on the Race Street Pier in June. It was made by London-based artist Tracey Emin, and was first installed in Hong Kong in 2017.

In October, three large stone-slab gateways called "Doors for Doris" will be installed. It was created by Sam Moyer, a Brooklyn-based artist, and is currently on display in Central Park in New York City.

Philadelphia Contemporary will present a trio of works from Jean Shin, Radcliffe Bailey and Hugh Hayden after that.

This isn't the first time Philadelphia Contemporary has displayed artwork along the waterfront. Philbrick previously worked with the Delaware River Waterfront Corporation to host an arts festival during the opening of Cherry Street Pier.

Philadelphia Contemporary's next exhibition, "Unfolding," which features local artists, starts May 28 and runs through July 23. Everything from photography, sculpture, painting, writing and music will be on display. It will be hosted at the Atelier Art Gallery.

Philadelphia Contemporary currently hosts an exhibit pop-up at the Please Touch Museum called "Double Rainbows," which runs until June 27. It features a collection of rainbows created by children across the region that they hung in windows to spread joy and hope with their neighbors during the pandemic.

Families are encouraged to create a rainbow to add to the gallery, the Contemporary said.