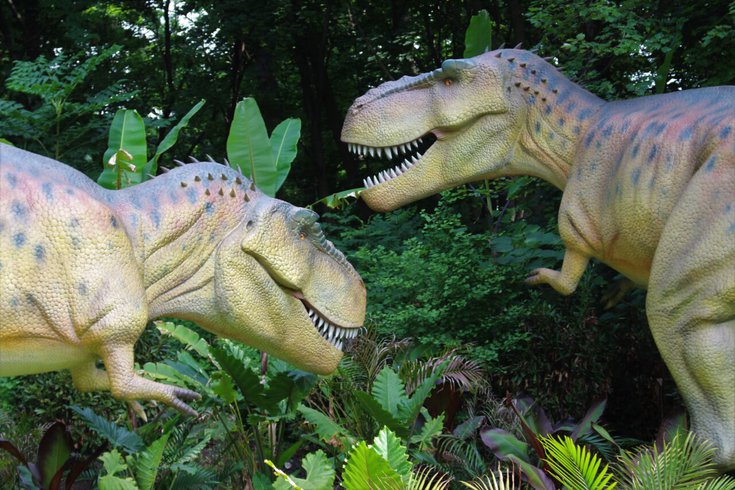 Paleontologist and natural historian Don Lessem will appear on an episode of ABC's 'Shark Tank' on May 21, 2021. He'll pitch an upcoming exhibition for his famed dinosaur robots. The dinos pictured above are from the Philadelphia Zoo's 'Big Time' exhibition, which features 24 animatronic dinosaurs made by Lessem's Dino Don, Inc. in Media, Pa.

Dinosaur expert and robotics pioneer Don Lessem will be appearing on an upcoming episode of ABC's "Shark Tank," where he'll pitch a new animatronics exhibition to the show's feisty investors.

The Delaware County native, known for his breathtaking animatronics exhibitions around the world, will be featured on the show on Friday, May 21 at 8 p.m.

Lessem, who is based in Media, told Planet Attractions that he recently appeared for a taping of the show and apparently had success attracting investments from unnamed sharks.

"A new version of our robots will be debuting later this year. I can’t go into specifics but I went on a television show that gives people money and they gave me the funding to create our new touring exhibition," Lessem said. "It’s good for COVID times because this would be like a safari and you drive through a park. As you drive through, you encounter different scenes with these animals and now they can have personalities to them. It will be a lot of fun to do something that hasn’t been done that way before."

Dino Don, Inc.'s famed exhibitions date back to 1993 and include work that evolved from his role as an advisor to Steven Spielberg during the making of the original "Jurassic Park" films. Lessem's company is among the world's only manufacturers of life-sized robotic dinosaurs — a collection of 200 prehistoric beasts, many of which are displayed at the company's Delco headquarters.

Twenty-four of Lessem's dino robots currently are on display as part of the "Big Time" exhibition at the Philadelphia Zoo. He even has a dinosaur, Lessemsaurus, named after his contributions to paleontology, which include 52 books published on natural history and philanthropic donations from exhibition proceeds.

Lessem told Planet Attractions that his latest work builds on advances in robotics that will allow for more multifaceted, interactive and life-like animatronics.

"We’re now at a point, if we want to, that we can make our dinosaurs rap, lip sync to music and generally interact with each other," Lessem said. "We can run a number of programs, so you can have the dinosaurs act more docile in the day and maybe get them to be scarier at night for example. It’s very exciting and means we can do things that we haven’t been able to do before."