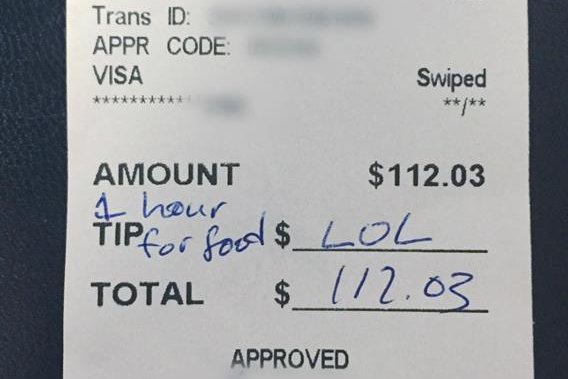 A Belmar waitress posted this receipt from a customer that left "LOL" on a $112 bill instead of a tip.

A waitress in Belmar, New Jersey, was not happy about a customer's tip on a large dining bill that left a text abbreviation in lieu of money.

Jessica Corrine is a 20-year-old server at D'Jais Bar and Grill who works to help pay for her education at Rutgers University, according to the Asbury Park Press.

Corrine was working on Aug. 17 and serving a party of eight. She said in a Facebook post that she informed the party the kitchen was busy and that they did end up waiting an hour to get their food but were satisfied with drinks until their meals arrived.

In the post, she added a picture of the group's receipt, with all of the personal information blurred out. The bill was $112.03 and in the spot where the tip should go the customer wrote "LOL." The reasoning for stiffing Corinne was because they had to wait "1 hour for food," the patron wrote.

Corinne chided the group, saying that waiters and waitresses often work very hard and rely on their tips to get by. In her case, she said her hourly pay is just $2.50. She also had a message for future customers at any eatery:

My experience with this table was cruel and unnecessary but sadly it's not uncommon. With that said: Please be good to your waiters. I know it's annoying when things aren't right. I know how aggravating it is to receive a hefty bill when all night you've been wondering why the table that came in after you was served before you. But waiters are mere messengers most of the time, and it's wrong to shoot them, however bad the news.

Her post about the absent (not to mention taunting) tip has gone viral, getting picked up by several national news outlets and receiving more than 6,500 shares on Facebook.

Although the customers aren't identified, the lesson here is clear: If you don't tip your servers, there's a good chance you'll be publicly shamed. Just ask LeSean McCoy.