Fauci: FOX News host Jesse Watters 'should be fired' for urging young conservatives to 'ambush' him

At AmericaFest, the pundit and Philly native riled up his audience with a needlessly violent metaphor 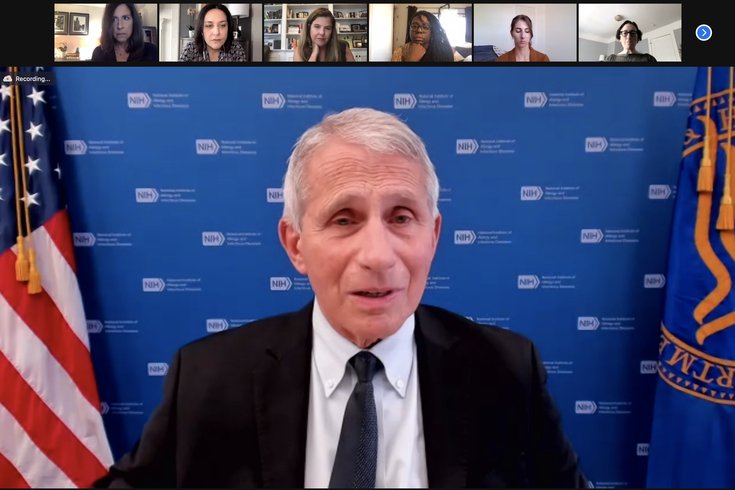 Dr. Anthony Fauci, director of the U.S. National Institute of Allergy and Infectious Diseases, said FOX News host Jesse Watters should be fired for inciting an audience with violent language at the conservative AmericaFest conference recently. Watters said college students should 'ambush' Fauci in order to generate a viral clip that will create scrutiny of his transparency during the nation's pandemic response.

Political "festivals" are not reliable places to find fact-based discussion about pressing issues of the day. They are essentially rock concerts of rhetoric, where featured speakers are encouraged to use hyperbole in order to gas up followers who traveled to get their money's worth of righteous indignation.

AmericaFest, a tour led by the conservative Turning Point USA, has been at the Phoenix Convention Center over the past few days with a roster of guests including FOX News hosts Jesse Watters and Tucker Carlson, Georgia Rep. Marjorie Taylor Green and acquitted Kenosha shooter Kyle Rittenhouse, among others.

It would be nice to still believe that this kind of setting is nothing more than a harmless exhibition of how debased political culture has become in the United States.

But less than a month away from the anniversary of the Jan. 6 insurrection at the U.S. Capitol, an event that was a master class in the enabling power of demagogues, incendiary remarks made by Jesse Watters at AmericaFest underscore that egging on pissed off people with aggressive language has gotten to be too casual for comfort.

Watters, a native of Philadelphia's Germantown and East Falls neighborhoods, took aim Monday at Dr. Anthony Fauci, the nation's top infectious diseases expert, who has been much-maligned across the political spectrum for different facets of the government's handling and transparency surrounding the coronavirus pandemic

In a clip that has circulated widely on Twitter, Watters called on his conservative followers to "ambush" Fauci in public by demanding that he answer questions about the U.S. government's past funding of controversial virology research in China, playing into armchair conjecture about the origins of SARS-CoV-2 and misrepresented connections between the NIH's funding of a nongovernmental organization called EcoHealth Alliance and the Wuhan Institute of Virology.

If young college students were to confront Fauci, Watters suggested, they could deliver a "kill shot" that unravels Fauci's image as a trusted public servant.

The incendiary, dangerous, violent rhetoric against Dr. Fauci continues at AmericaFest. Fox News host Jesse Watters tells them how to go after him to harass him in public: “Now you go in with the kill shot - deadly. Because, with an ambush, he doesn’t see it coming.” pic.twitter.com/V34YZwDdPD

"Boom! He is dead! He is dead! He's done!" Watters said of this hypothetical ambush, which would be best if it came with a viral video clip for FOX News or another station to profit from, ideally.

On Tuesday, Fauci appeared on CNN and responded to Watters' remarks in an interview with host John Berman.

JUST NOW: "I mean, that's crazy. The guy should be fired on the spot. "

"That's horrible. That just is such a reflection of the craziness that goes on in society," Fauci said. "The only thing that I have ever done, throughout these two years, is to encourage people to practice good public health practices ... And, for that, you have some guy out there saying that people should be giving me a 'kill shot'? To 'ambush' me? I mean, what kind of craziness is there in society these days?"

Fauci added that Watters should be "fired on the spot" for making such remarks.

There are a few bigger-picture things to consider about Watters' speech, beyond the festival theater of it all.

The substantive, open-ended issue of coronavirus research — the quest to determine the timeline and causes that landed the world in a deadly pandemic — is too easily used by Watters as an unqualified shorthand for directing petty agitation at an influential figurehead.

If you're looking for Watters' own scientific bona fides to discuss the coronavirus lab-leak theory or "gain-of-function" research, you won't find it in his takes on climate science, for instance.

"You can fight climate change with suntan lotion," Watters said on FOX News in 2019. "It's not that big of a deal."

Even hardline skeptics of climate change, or its impact on society, would know better than to trot this kind of lazy act out if they had any hope of respectably defending their opinion on scientific grounds.

But to merely say that scientific interpretation is better left to scientists — and that the scientists need better public message-bearers than Watters — is a view that pundits and festival attendee-types hold in contempt. They believe that their political opponents blindly accept "Big Science," represented by people like Fauci, as dogma in order to serve as gatekeepers of a truth that they base largely on hunches and gut feelings rather than facts.

Scientific consensus typically takes a long while to form. It's marked by contention, and it's subject to political and professional pressures. The greatest disservice done to science is not understanding how far it has come despite all of that, and the risks of science going too far because of it.

There has been ample reporting on the debate over whether the coronavirus pandemic emerged from nature or leaked from a lab. The subject is far, far more complex than Watters and others like him, including Kentucky Sen. Rand Paul, have ever proven capable of handling without a political agenda.

Watters is a panelist on FOX News' 5 p.m. show "The Five" and also has a FOX News show on Saturday nights. He got his start at the network on former host Bill O'Reilly's show, where his "Watters World" segment sometimes featured ambush-style interviews with public figures.

More often than not, Watters has succeeded only in looking like a person with questionable ethics as a journalist. His "kill shot" tactics don't elicit much reporting value and don't prove anything other than that he's willing to put people on the spot because it makes him appear tenacious — not because any of the people he wants to make squirm actually take him seriously.

FOX News provided a statement to the Washington Post that claimed Watters' comments at AmericaFest were "twisted completely out of context" and that the host was "using a metaphor for asking hard-hitting questions to Dr. Fauci about gain-of-function research."

Since when did the encouragement of hard-hitting reporting necessitate a metaphor in which college students are instructed to ambush someone and deliver a kill shot? It's too easy to underestimate what angry people will do, and easier still for people like Watters to escape responsibility for planting those seeds.

Who was Kyle Rittenhouse, if not someone who had been listening too eagerly?