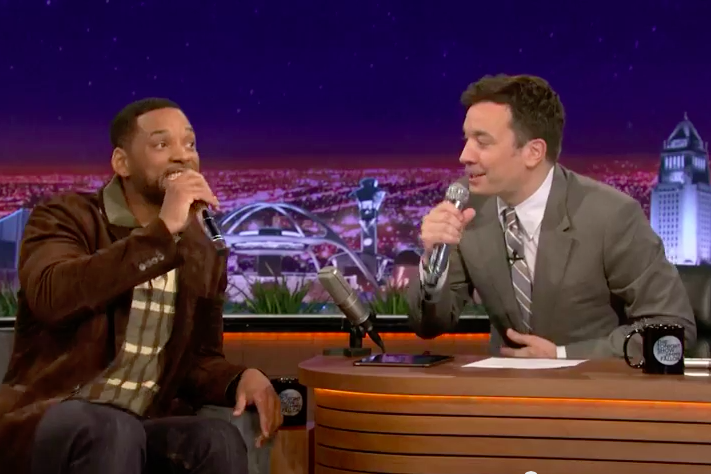 Jimmy Fallon and Will Smith make a beatbox loop using an iPad app to sing "It Takes Two" by Rob Base & DJ E-Z Rock on "The Tonight Show."

Hollywood superstar Will Smith joined Jimmy Fallon for "The Tonight Show's" last night in Los Angeles on Thursday, and of course, it was television gold.

"The Tonight Show" arrived back in Los Angeles on Monday in style. Fallon recreated "The Fresh Prince of Bel-Air" opening and reunited with most of the "Saved by the Bell" cast in the halls of Bayside High.

"You're a famous rapper, and I'm a classically trained beatboxer, so I want to try something fun with you here," Fallon told Smith, as he took out an iPad.

The pair then used a beatbox music app to layer their voices together, creating the perfect background beat for Rob Base and DJ E-Z Rock's "It Takes Two."

Then the rapping began. Watch the magic below.

Considering Smith hasn't released new music since 2005's "Lost and Found," this video is proof that the multiplatinum rapper formerly known as the Fresh Prince still knows how to entertain a crowd.

Fallon has used the music app on his show before. Last year, he and Billy Joel used it to perform a doo-wop cover of "The Lion Sleeps Tonight."