Over the last two or so months, we have published five "Eagles-only" seven-round mock drafts. For the first (and final) time, here is our one and only full first-round mock NFL Draft:

1) Arizona Cardinals: Kyler Murray, QB, Oklahoma. In March of 2018, GM Steve Keim signed Sam Bradford to a one-year deal worth $20 million. A week later, he signed Mike Glennon to a two-year deal worth $8 million. In the 2018 NFL Draft, he traded Arizona's first-, third-, and fifth-round selections (15th, 79th, and 152nd) to the Raiders to take Josh Rosen at 10th overall. And finally, two months after the draft, he plead guilty to an "extreme DUI." Bradford and Glennon are gone, and Rosen is soon to follow, and yet, the Cardinals allowed Keim to keep his job, and he'll make perhaps the most important draft selection in franchise history. I guess there's perhaps something redeeming in not sticking with a quarterback in Rosen who doesn't appear to be very good, and making sure you get the most important position right. Or will they? Some are beginning to believe the Cards will just roll with Rosen and take a position player. If so, what an insanely dumb franchise.

3) New York Jets: Quinnen Williams, DT, Alabama: The Jets are begging to trade out of this pick, but if they stay, they will almost certainly draft one of Quinnen Williams, Ed Oliver, or Josh Allen. Williams and Oliver are better players, in my view, while Allen is more of an immediate need. I believe that the Jets will opt for the best player. So then the debate becomes, who is better between Williams and Oliver? There's talk that the team prefers Oliver, which to me is crazy, and probably a smokescreen.

4) Oakland Raiders: Dwayne Haskins, QB, Ohio State: After the Eagles' win over the Oakland Raiders in December of 2017, an angry Raiders personnel guy stormed through the elevator area of the press box screaming about how much his team's $100 million quarterback sucked. In 2020, the Raiders will be able to get out of Derek Carr's contract with minimal pain. With a new regime in place, Jon Gruden and Mike Mayock find their quarterback, and allow him to ease in with Carr on the roster for one last season.

5) Tampa Bay Buccaneers: Devin White, ILB, LSU: Last offseason, GM Jason Licht invested a lot of resources in the Bucs' defensive line, and they still didn't get much in the way of production up front. They should address the D-line in this draft, as there are all sorts of compelling options available, but it's hard to trust a general manager that knows so little about positional value that they traded up for a freaking kicker in the second round. I think they go BPA here, unwisely, on a very good linebacker, but at a position that isn't anywhere near as important as one who can affect the quarterback.

6) New York Giants: Josh Allen, Edge, Kentucky: Because the Giants made a scheme change from a 4-3 to a 3-4, they traded away Jason Pierre-Paul and Olivier Vernon, despite taking on a boatload in dead money to do so. As such, they are in desperate need of an edge rusher, and Allen (17 sacks and five forced fumbles for Kentucky in 2018) would be a great fit in James Bettcher's scheme.

7) Jacksonville Jaguars: Jawaan Taylor, OT, Florida: Taylor is a mauler, and the Jags want build their team around the run game, which is stupid. Taylor is a good player, and a great fit for the misguided way Jacksonville is trying to win.

8) Detroit Lions: Ed Oliver, DT, Houston: Matt Patricia is trying to build another Patriots-like roster in Detroit, and one of the things the Pats have been known for is their love of versatile defenders. Oliver can be a disruptive presence, playing all over the line. An offensive lineman is a possibility here as well.

9) Buffalo Bills: Christian Wilkins, DT, Clemson: The Bills signed like 30 offensive linemen in free agency, so the thinking here is that they'll try to sure up the trenches on the other side of the ball. Wilkins will help a defense that had the seventh-fewest sacks in the NFL in 2018.

10) Denver Broncos: Drew Lock, QB, Missouri: Lock has good size, a strong arm, and some athleticism, kind of like, well, John Elway, though obviously he is a very poor man's version. There's some thinking that Elway might pass on quarterbacks in this draft to pursue one next year, but that would assume that Elway thinks he'll have a high pick in 2020, and that's just not how he is wired. In my view, Lock has a chance to be very good if he can get some accuracy issues ironed out. He's the type of quarterback that always goes higher in the draft than projected.

11) Cincinnati Bengals: Devin Bush, LB, Michigan: There are two great linebacker prospects in this draft, and then it falls off drastically. The Bengals get their replacement for Vontaze Burfict.

12) Green Bay Packers: T.J. Hockenson, TE, Iowa: The Packers have taken a defensive player with their first pick in each of the last seven drafts. I think that changes this year, if Hockenson is still available, as he'll give the Packers an already complete tight end who Matt LaFleur can use creatively.

13) Miami Dolphins: Jeffery Simmons, DT, Mississippi State: The Dolphins have needs all over their defensive line. Inside, outside... wherever. Simmons is a top 5 talent who can't play this season, and the Dolphins are tanking anyway, so what do they care? I think they trade back and nab Simmons, but we'll still project him here.

14) Atlanta Falcons: Rashan Gary, DE/DT, Michigan: Gary's college production leaves a lot to be desired, but he is an athletic freak with inside-outside versatility who should fit well in the Falcons' defensive scheme.

15) Washington: D.K. Metcalf, WR, Ole Miss: I wouldn't rule out Dan Snyder and Bruce Allen doing something absurd for a quarterback, but if they stay put, they could simply over-draft Metcalf because they have one of the worst wide receiver corps in the NFL.

16) Carolina Panthers: Jonah Williams, OT, Alabama: Williams' best fit in the NFL is probably at guard, and he could start at LG for Panthers from Day 1.

17) New York Giants: Daniel Jones, QB, Duke: There's a good chance the Giants get clowned into trading up from this spot, but ultimately, I think they end up drafting a quarterback with a premium resource, five years too late, and they land a guy who probably shouldn't even be a first-rounder.

18) Minnesota Vikings: Garrett Bradbury, C, North Carolina State: The Vikings' OL has stunk for years, and Bradbury would be a major upgrade over Pat Elflein.

19) Tennessee Titans: Brian Burns, Edge, Florida State: Burns is a great fit as an edge rusher in Tennessee's 3-4 scheme. He and Harold Landry would form an intriguing, young edge rusher tandem the Titans can build around.

20) Pittsburgh Steelers: Byron Murphy, CB, Washington: Murphy's size and speed measurables aren't impressive, but he gets his hands on a lot of footballs, and the Steelers need help at corner.

21) Seattle Seahawks: Montez Sweat, Edge, Mississippi State: Sweat has reportedly been red flagged for a heart condition and character concerns. I believe most teams will be more concerned with the latter, though the Seahawks have proven they will draft players with questionable character, as evidenced by their selection of Frank Clark, who oh by the way, they now also need to replace.

22) Baltimore Ravens: Marquise Brown, WR, Oklahoma: Quick, name the Ravens' receivers. (Jeopardy music playing.) Give up? It's not pretty. Brown would give the Ravens a speed receiver with inside-outside versatility. And yes, I realize the Ravens are going to run the ball a lot with Lamar Jackson. But, like, are they just not going to have receivers, at all?

23) Houston Texans: Andre Dillard, OT, Washington State: The Texans' offensive line is hot burning trash, and has been for years. They almost have no choice but to take an offensive lineman, and I think they may try to trade up to select Dillard. 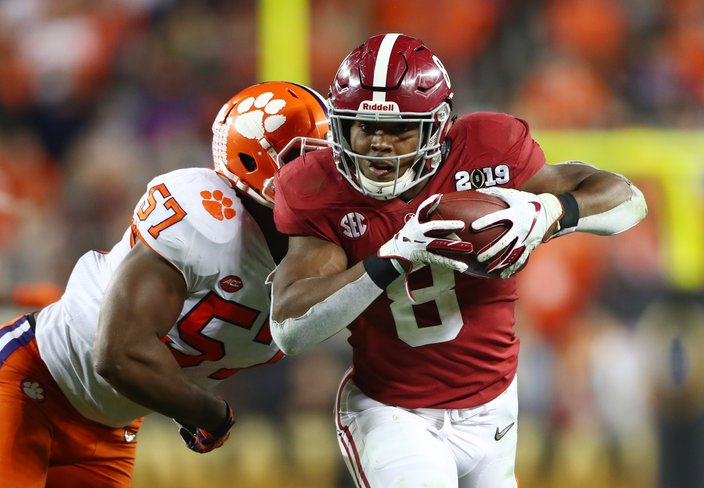 It's Josh Jacobs in a landslide, although the Eagles did acquire Jordan Howard.

24) Oakland Raiders: Josh Jacobs, RB, Alabama: The Raiders said goodbye to Marshawn Lynch, and Jacobs is a three-down replacement with a lot of tread on the tires.

25) Philadelphia Eagles: Dexter Lawrence, DT, Clemson: I think the Eagles will try to trade up (not for Lawrence). If they can't, I think that when they're on the clock at 25, they'll try to trade back. If they make the pick at 25, I believe Lawrence makes sense, and we laid out the case for him here.

26) Indianapolis Colts: Clelin Ferrell, DE, Clemson: Ferrell is an unexceptional, but well-rounded defensive end who was a productive pass rusher at Clemson, but also very good against the run.

27) Oakland Raiders: Noah Fant, TE, Iowa: The Raiders would be thrilled in this scenario, as Fant is essentially a wide receiver in a tight end's body who can help keep opposing defenses honest if they give too much attention to Antonio Brown.

28) Los Angeles Chargers: Cody Ford, OT/OG, Oklahoma: Is he a RG? A RT? Doesn't matter. The Chargers need help on the entire right side of their line, and Ford is an immediate upgrade at either spot, wherever you want to put him.

29) Seattle Seahawks: Johnathan Abram, S, Mississippi State: While Abram isn't much like Kam Chancellor from a size perspective (Chancellor is much bigger) or athleticism perspective (Abram is a lot faster), Abram plays the game in many of the same ways as Chancellor, in that he's a big hitter who brings some swagger to the defense.

30) Green Bay Packers: Jerry Tillery, DT, Notre Dame: The Packers added a pair of high-priced pass rushers in Za'Darius Smith and Preston Smith this offseason, but it wouldn't be crazy if they added one more, and Tillery could be a great fit at DE in the Packers' 3-4 scheme.

31) Los Angeles Rams: Deandre Baker, CB, Georgia: While Baker isn't a speed demon, he is hyper-competitive and physical, like a couple of recent Rams CB acquisitions in Aqib Talib and Marcus Peters. To note, the Rams badly want to trade out of this pick.

32) New England Patriots: Irv Smith, TE, Alabama: Yes, it's easy to mock a TE to the Patriots with Rob Gronkowski retiring, and that's exactly what I'm going to do.