Suburban politician, who called BLM a hate group and COVID-19 lockdowns 'un-American,' will run for governor

In kicking of his campaign, Joe Gale, Montgomery County's Republican commissioner, also proclaimed he's not one of the GOP's 'establishment puppets' 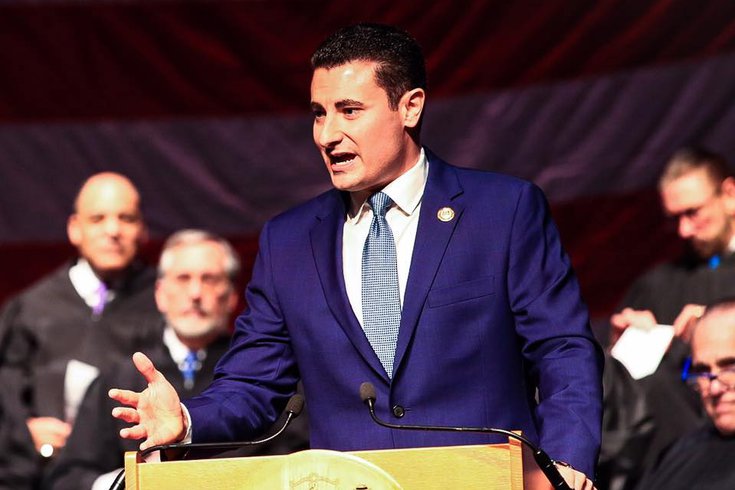 Joe Gale, a vocal supporter of Donald Trump who frequently mimics the former president's bombastic style, says he is running for Pennsylvania governor in 2022.

Gale, 31, who serves as the lone Republican on the Montgomery County Board of Commissioners, announced his plans via Facebook on Tuesday. He is the first candidate to enter the gubernatorial race to succeed Gov. Tom Wolf, a Democrat serving his second term.

In the past year, the suburban politician has drawn attention beyond the borders of Montgomery County and been widely condemned for comments about the Black Lives Matter protests, the COVID-19 pandemic and most recently, the Jan. 6 insurrection at the U.S. Capitol.

Amid the Black Lives Matter protests in Philadelphia last spring, which followed the death of George Floyd, the Black man who was killed by police in Minneapolis, Gale focused on the demonstrations in the city that had turned violent and destructive. In a statement, he called Black Lives Matter a "radical left-wing hate group" and "perpetrators of this urban domestic terror."

Before that, Gale had tweeted in May that leaders like Frank Rizzo are "needed now more than ever," during the push for the statue of Rizzo to be removed from the steps of Philadelphia's Municipal Services Building because of the mayor's racist history. And prior to that, he criticized the restrictions Harrisburg had put in place to mitigate the spread of the coronavirus, calling Wolf's lockdown orders "outrageously un-American."

Among some circles of his own party, Gale is no favorite, and he doesn't have a problem with that.

He won his seat on the Montgomery County Board of Commissioners running in 2015 as an unendorsed candidate and ever since has relished the role of outsider.

"We cannot afford to replace Governor Wolf with an establishment puppet or fake conservative who makes big speeches and peddles false hope instead of delivering real results," Gale said of the Republican Party, as he kicked off his campaign "We need an independent conservative outsider who has the proven ability to win and the fortitude to lead."

He added that the state's Republican party – which is considering censuring Sen. Pat Toomey for voting to convict Trump at his impeachment trial – was not conservative enough. Gale's top priorities are to oust "bad Republicans" and to repeal the state's no-excuse absentee voting law that passed in 2019.

"I expect all the other candidates … will simply be puppets on a string for Republican Party bosses and establishment insiders," Gale said on Facebook in reference to his potential GOP primary opponents. "I am not a puppet on a string."

On Tuesday, Gale also announced that his younger brother, Sean Gale, will run for U.S. Senate in Pennsylvania in 2022, to fill the seat that Toomey said he will be vacating. Joint announcements — and two brothers running for office in the same — are not typical.

Sean Gale is an attorney who ran unsuccessfully for Montgomery County commissioner in 2019.

Joe Gale did not respond to PhillyVoice's request for comment.