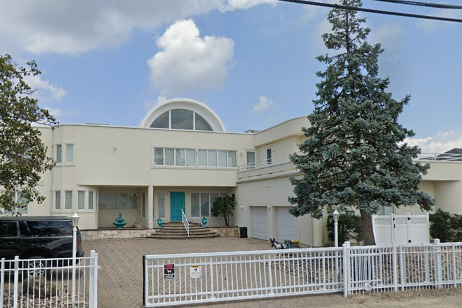 Joe Pesci sold his Lavallette home at the Jersey Shore for $6.5 million. The Academy Award-winning actor took the waterfront property off the market at least three separate times since 2019 after not being able to find a buyer.

It might have taken some arm-twisting, like some of his best film characters are known for doing, but Joe Pesci reportedly has finally found a buyer for his waterfront Jersey Shore property that had been put on the market two years ago.

The Academy Award-winning actor's Lavallette, Ocean County, mansion is under contract and being sold at its original listing price of $6.5 million, according to Zillow.

The path to selling the bayfront home wasn't easy for Pesci. The "Goodfellas" star and New Jersey native took the property off the market at least three different times since 2019 after failing to find a buyer, the New York Post reported.

While the property was for sale, Pesci also fought with his neighbors about how long their boat docks should be permitted to extend into the Barnegat Bay. The 78-year-old even wrote a letter, urging the state to stop his neighbors from extending their docks out too far into the water, arguing that the extra-long docks negatively impacted his bayside experience, according to the Daily Mail.

So it sounds like Pesci was more than ready to let go of his shore house.

Pesci originally purchased the West Point Island mansion for $850,000 in 1994, four years after it was originally built.

The 7,291 square-foot home is described as a contemporary residence featuring Art Deco design. The eight bedroom, eight bathroom mansion features a heated pool and spa on a terrace that overlooks the Barnegat Bay. The house is located a short drive from the Lavallette beach.

Inside, the house features an elevator, a spiral staircase and a spacious, open, floor plan with large, rooms and floor-to-ceiling windows. The upper level of the home has a private, master-bedroom balcony and office.

Perhaps the property's most distinguishable feature is its memorabilia-filled home theater. The media room features posters and other mementos from some of Pesci's most famous films, including a "Lethal Weapon" pinball machine.

When Pesci originally listed the property for $6.5 million in 2019, it was the most expensive listing in Lavallette. The house is formally assessed at $3.2 million and generated a $26,400 property tax bill last year, which is considered low given the home's value.

Pesci sold his Jersey Shore property with plans to retire in California, according to the Lavallette-Seaside Shorebeat. Pesci came out of retirement two years ago to star alongside Robert De Niro and Al Pacino in Martin Scorsese's gangster film "The Irishman," which was largely set in Philadelphia. His performance in the Netflix film earned him an Academy Award nomination for best supporting actor.